Since our prior analysis the index has broken to new highs. Given its tidy retracement towards key support, those new highs may just be short lived.

Just coming off from its highs, the trend remains undeniably bullish. While the recent burst higher became a little overextended above its Keltner band, a retracement has since respected key support around 1267.23-1272.87. 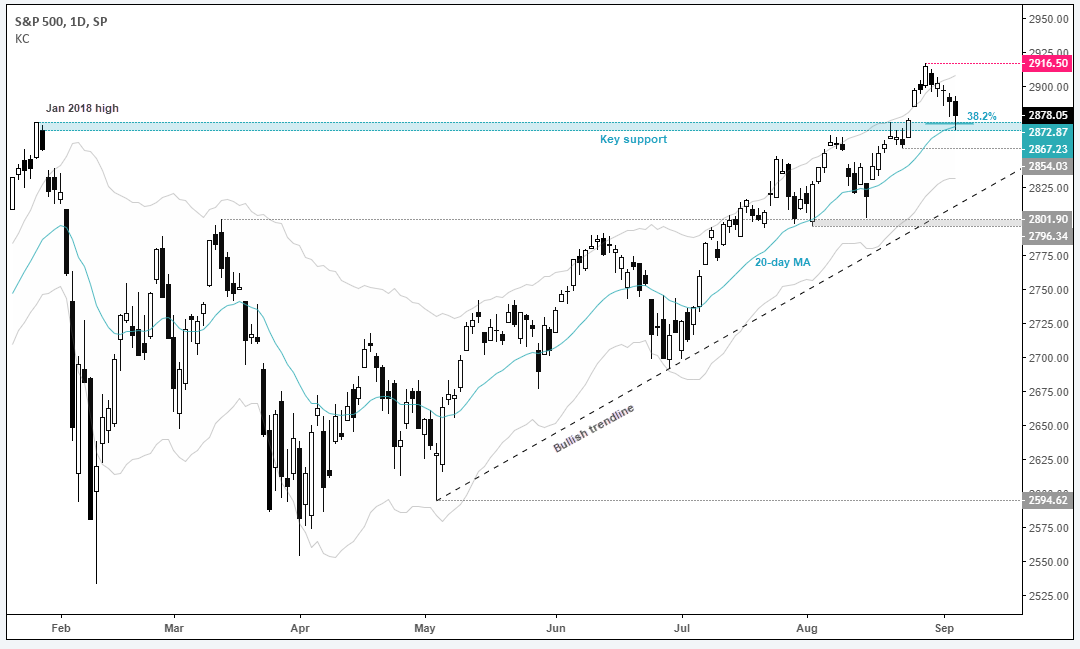 The tight zone of support comprises of the January high, its 20-day average and a 38.2% Fibonacci level. Moreover, yesterday’s low almost perfectly respected it. While we wouldn’t go so far as to label yesterday’s candle as a bullish hammer, its long tail shows a hesitancy for traders to push it lower. Put together, this tight support area remains pivotal to the analysis over the near-term.

A break beneath support may spoil the near-term bias but it wouldn’t change the trend. Furthermore, additional support likely awaits at the 2854.03 low and/or bullish trendline. Ultimately the bias remains bullish due to the sequence of higher swing lows and respect of key support. From current levels there’s 38 points of potential up for grabs towards the highs, but in context of the strong bullish structure a break to new highs seems achievable.

Going into today’s session sentiment may be against us. Asian shares have sunk to a 14-month low due to fears of trade and emerging market contagion. But it should also be noted that U.S. stocks have only seen minor retracements during turbulence. And, with PMI data also hitting multi-year highs (making another strong growth/stock market storey) we’ll take our chances by going long in the U.S.