Although the midterms elections haven’t always been viewed as a major event for markets, there is an argument to be made that the vote on Tuesday, Nov. 6, in the U.S. could spark more volatility than usual.

However, the polls had it hopelessly wrong ahead of the 2016 elections, so if the Republicans are to retain both the house and senate, then stocks could be in for quite a relief rally. What could also help is that since 1962, the S&P500 has tended to rise on the days following a mid-term election even though the ruling party almost always loses seats. Over the past 14 mid-terms, the ruling party has lost seats on 12 occasions, shedding 22.3 house seats and 2.9 senate seats on average. So, it’s hard to argue stocks should fall if Democrats only take the house. Still, the S&P500 chart is teasing us with a potential leg lower in spite of this.

If the polls are to be believed, the Democrats are likely to take the house. If they’re to surpass expectations and take the senate as well, it could provoke a knee-jerk (and bearish) reaction from U.S. stocks as Democrats would be in an even stronger position to block or alter major policy changes or even move to impeach President Donald Trump. 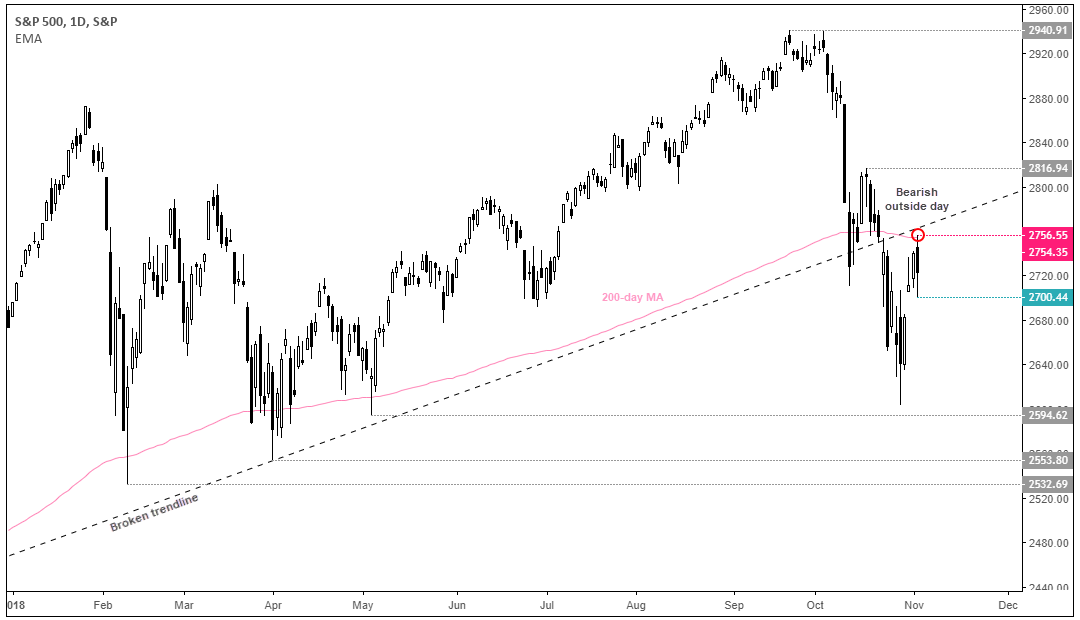 Looking at the daily chart we can see the S&P500 has bounced from its lows since our previous post. The 200-day average is capping as resistance and it’s interesting to note last week’s high stopped just shy of the broken trendline from the March 2016 low. Furthermore, Friday produced a bearish outside day to warn of a swing high below the resistance cluster.