HomenewsNewsSterling Building a Base on Brexit Hopes

Sterling Building a Base on Brexit Hopes

Sterling remains better bid and bullish in the short- to medium-term after the Conservative Party conference passes without any challenge to PM Theresa May, while talk out of Brussels turns firmly to getting a trade deal in place, despite ongoing differences over the Irish border. GBPUSD is getting back to its best level of the week, and will likely extend this move, as the uptrend off the August 15 low at 1.2662 continues. Against the euro – the best Brexit barometer – the pound hit a 2 month+ high and is now looking to break below the 0.8800 level, a price last seen at the start of July.

The driver for the move is a slight shift in Brexit negotiations from arguing and being negative – on both sides – to moving forward and actively seeking a trade agreement that both sides can accept. While UK PM Theresa May continues to put forward the unpopular Chequers plan, which will not get past either the UK Parliament or Brussels in its current guise, the EU have repeated that a special deal – Canada+++ – remains on the table and ready to be signed. The +++ in the deal is still open to interpretation and may give both sides the necessary flexibility going forward to get a deal agreed.

Looking ahead, Sterling remains a ‘buy on dips’ as long as the positive trend continues, although should be cognizant of a raft of medium-importance data on the slate next Wednesday. The comprehensive DailyFX Economic Calendar for the week ahead provides traders with updated data and forecasts across all major currencies. On Monday we will be taking are regular in-depth look at important UK data releases, Brexit and other UK asset market drivers at 10:30GMT in our UK Key Events and Markets Webinar. 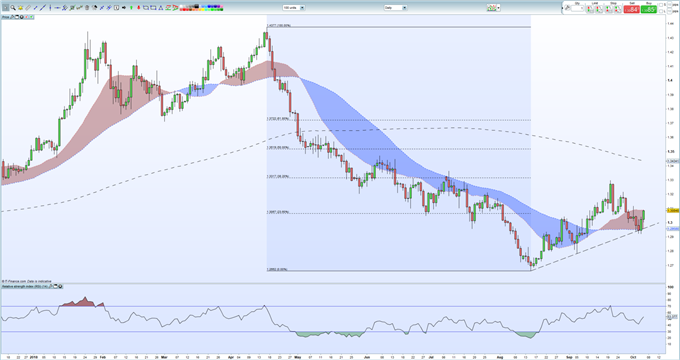