There has been an air of unreality about ’s rally. However, its reaction to the string of votes in the U.K.’s House of Commons on Tuesday night—losing nearly a cent against both the dollar and the —undoubtedly prices the current balance of probabilities around Brexit more accurately. 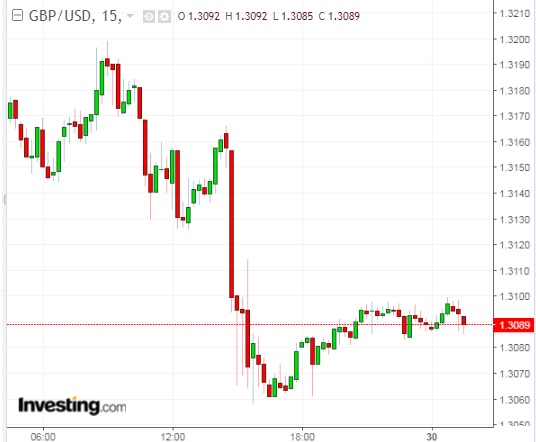 But with a hard, no-deal Brexit confirmed again as the default option, and many of the more sterling-bullish outcomes now all but ruled out, the risk is that the pound still has a good deal further to fall.

“No deal is now probably the most likely outcome,” David Henig, U.K. director at the European Center for International Political Economy, said via Twitter.

He added that there is now “virtually no prospect” of a second referendum that could overturn the 2016 vote to leave.

Analysts at Deutsche Bank were certainly quick to abandon their previous recommendation to go long sterling after the first vote on Prime Minister Theresa May’s deal two weeks ago. In a note to clients after Tuesday’s votes, they wrote:

“As well as increasing the risk of a crash Brexit by accident, it should not be positive for economic confidence which is already deteriorating due to political uncertainty. We consequently take profit from our short EUR/GBP recommendation from two weeks ago and turn neutral on sterling.”

The crucial moment came when MPs rejected an amendment that would have allowed parliament to seek an extension of the March 29 Brexit deadline. The amendment framed a way to avoid a ‘no-deal Brexit.’ However, it was also seen as paving the way for a second referendum. It failed because not enough MPs from the governing Conservatives were willing to defy their leaders, and too many opposition Labour MPs were afraid of appearing to undermine the first referendum.

Five other amendments to May’s deal also failed. About the only thing that lawmakers could agree on was to instruct May to reopen negotiations with the EU over the Withdrawal Agreement governing the immediate period after Brexit. Given that the EU has repeatedly said that it won’t reopen the negotiations, this is, to put it mildly, a tall order.

The only other amendment to pass did indeed rule out a no-deal Brexit. However it was introduced by Conservative MP Caroline Spelman as non-binding, so it has no legal force.

Sterling bulls, and businesses across Europe, were hoping Tuesday night’s vote would take the risk of a disruptive No Deal off the table completely. It didn’t, because the threat of disruption to the European economy has been one of the very few cards the U.K. holds.

Surrendering it at this stage of the negotiations makes no sense, even if playing it in any conceivable scenario is equally imprudent. It’s not brinkmanship if you don’t take it to the brink.

The Brexiteer position has always rested on the belief that Britain’s economic weight would force the EU to bend its rules. In fairness, there are more reasons to believe that now than there were two years ago, with the eurozone economy on the brink of stagnation as the U.S.-China trade war spills over into the global economy.

The willingness of Germany and France, who traditionally coordinate EU policy, to risk a recession for the sake of peace on the island of Ireland is not a given. Since 2008, the EU has proved time and again its inability to make any decisions with immediate and harsh consequences—except where they can be contained to small countries such as Greece—or Ireland.

But given the consistency of the EU’s negotiating line to date, the odds are that its solidarity will hold. The EU Council presidency, which represents the remaining 27 member states, restated immediately after the vote that the Withdrawal Agreement won’t be reopened at this late stage.

So sterling looks set to underperform, at least for a few more weeks while May goes through the motions of asking the impossible from Brussels. After that, only two things can stop a Hard Brexit: either more than 120 rebel lawmakers change their minds about May’s original deal, or she uses the non-binding Spelman motion as a fig-leaf to ask the EU for a deadline extension and—maybe—solicit parliament for a second referendum.

However, it would be a brave sterling bull who bet on either of those outcomes now.