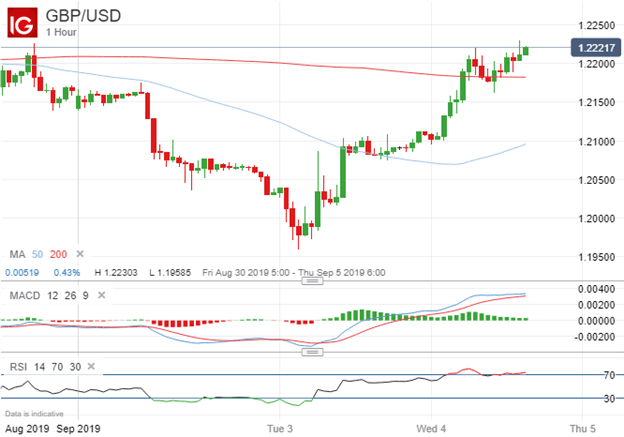 Turning to today, spot GBPUSD price action has continued its ascent and now trades over 200 pips higher since plunging below the 1.2000 handle earlier this week. Extended gains for the Pound Sterling comes amid reports that the most recent Brexit vote passed Parliament 327-299 which calls on the Conservative government to request from the EU another extension to Article 50 (i.e. delay Brexit again).

Check out our Brexit Timeline for details on how Brexit negotiations have impacted the UK, Pound Sterling and financial markets.

Yet, PM Boris Johnson has adamantly voiced his opposition to delaying Brexit again and promised to sever the UK from the EU on the October 31 deadline – regardless whether or not a Brexit Withdrawal Agreement deal can be successfully brokered. Also, in response to today’s Brexit vote passing Parliament, PM Boris Johnson has proposed calling for a general election on October 15. Now, markets await to find out the results of tonight’s vote in Parliament,which is scheduled for 9:30 PM local UK time, on whether or not MPs will back a general election.

While the “Brexit can-kicking” may help the Pound Sterling recover from recent multi-year lows, the rise in spot GBPUSD may prove to be short-lived considering the ongoing Brexit impasse remains largely unresolved. As such, keeping close tabs on British Pound implied volatility in light of its inverse relationship to Sterling spot prices may prove beneficial as the latest Brexit developments unfold.

Connect with @RichDvorakFX on Twitter for real-time market insight