Strong AUD Could Be A Problem For RBA

The month of March kicked off with a strong rally in equities that saw the erase all of Friday’s losses. resumed their rise and the rose to its strongest level against the Japanese Yen in six months. However the gains were not universal, as the improvement in risk appetite drove the Australian, New Zealand and Canadian dollars higher against the greenback.

There are a lot of reasons for investors to be optimistic this month. Spring is right around the corner, and the warmer weather will bring restaurants out of hibernation and provide a more supportive environment for outdoor dining. Congress is also widely expected to pass the $1.9-trillion stimulus bill this month. The bill has been approved by the House and handed off to the Senate. Democrats are expected to abandon their push for a $15 minimum wage in the hopes that a deal can be done. The clock is ticking with millions of Americans set to lose their extra pandemic unemployment benefits on March 14, so Congress needs to approve a deal quickly.

Recent economic reports also show countries around the world survived the second virus wave better than the first. Despite strict lockdowns, Eurozone and UK manufacturing PMIs were revised higher for the month of February. Both indices are well above the key 50 mark that separates contraction from expansion. The U.S. also hit a three-year high last month thanks to a surge in new orders. Demand has been particularly robust for electronics and furniture. With each passing day, more people are receiving COVID-19 vaccinations and with the weather improving, travel and spending should pickup.
The Australian dollar was the day’s best performing currency, and this strength will be a problem for the Reserve Bank. Last night, the RBA surprised the market when it announced AUD $4-billion worth of bond purchases. This follows an unscheduled AUD $3-billion purchase of short-term bonds last Friday. The central bank is taking aggressive measures to stem the rise in bond yields. While everyone has been focusing on the rise in U.S. Treasury rates and German bund rates, Australian yields experienced a similar surge. At the beginning of February, the 10-year Australian bond yield was 1.12%. This past Friday, it hit a high of 1.91%. There’s no question that when the RBA meets tonight, it will vocalize its concerns about rising rates. For there to be a durable recovery, interest rates need to remain low, and to achieve this goal, the RBA needs to sound dovish. Just as rising yields threaten the recovery, so does a strong currency. hit a three-year high last week and verbal intervention would be an easy way to halt the rise. 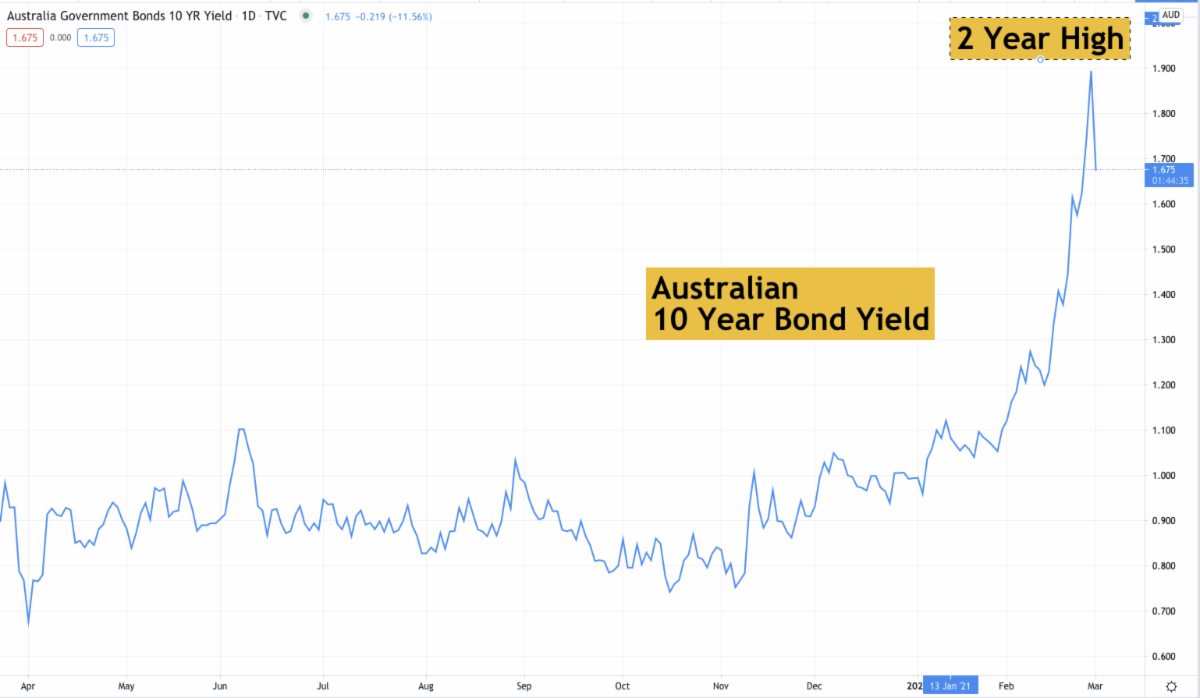 Australian 10-Year Bond Yield.
Although Eurozone and UK PMIs were revised higher for the month of February, euro and failed to participate in the risk rally. Yields are still the primary driver of currencies, and with German bond yields falling for the second day in a row when U.S. yields are rising, it is no surprise to see underperform. German labor market numbers are scheduled for release along with Eurozone CPI tomorrow. Improvements are expected all around.
The same cannot be said of Canada’s upcoming GDP reports. Quarterly and monthly GDP numbers are due for release tomorrow. The third quarter was strong for every one, whereas Q4 was more of a struggle. Consumer demand in particular cratered, with retail sales falling sharply towards the end of the year. The Canadian dollar has been in a relentless uptrend, and soft GDP numbers could halt the rally, paving the way for a relief rally in .