Equity markets were on a tear in January. The global MSCI equity index appreciated by 7.7% and the gained 7.9%. In Canada, the index jumped by 8.5%, driven by health care, consumer discretionary, energy and financials stocks. This was the strongest month-over-month gain since June 2009. Surely, there must have been a positive shift in market sentiment that, we believe, is supported by a series of U.S.-related factors.

First, the U.S. Federal Reserve now embraces a more dovish tone. Indeed, starting with an interview by Chairman Jerome Powell on Jan. 10, vowing to be “patient and flexible” in the conduct of monetary policy, he acknowledged the worries sent by market participants regarding the global economic slowdown. This more prudent stance was soon after reiterated by other Federal Open Market Committee (FOMC) voting members such as John Williams (NYSE:). But, what sealed the deal in terms of market perception was last week’s FOMC decision to keep interest rates on hold, vowing to be “patient” in raising rates in the future. What came as surprising news to investors were Powell’s comments about the Fed’s balance sheet, stating that it shouldn’t “shrink much further;” a development that we anticipated in our outlook 2019, but was considered less likely by investors.

Second, some developments in the U.S.-China trade negotiations were, in our opinion, supportive of a trade deal. At the very least, they favour an extension of the March 2 deadline for the deal, delaying the 25% tariffs on $200 billion of Chinese goods the Trump administration is threatening. For one, the Chinese government is expected to pass a law that would further open up the country to foreign investment, but more importantly, it would protect, in some ways, foreign investment from intellectual property (IP) transfer. While this law, reported to be passed in early March, is deemed by some analysts to be highly insufficient in solving the underlying IP conflict between the two belligerents, it is still a positive signal that China is willing to engage in serious negotiations. With China also reportedly having offered to reduce its annual trade surplus with the United States by as much as US$200 billion by ramping up U.S. imports, the U.S. President was optimistic about the prospect for a deal last week.

A slight positive bias toward equities

For the month of February, we recommend a small overweight position in equities – at 55% equities, 45% Canadian bonds – in order to benefit from the above-mentioned, somewhat positive developments in central bank policies and the trade dispute (see table below). Indeed, with Trump rumored to negotiate in person with President Xi in Vietnam at the end of the month and the extradition trial in Canada of Huawei CFO Meng Wanzhou not to start before March 6, we believe that fewer-than-usual geopolitical events could derail the current risk-on market sentiment during the month of February. To be sure, unforeseen geopolitical events could come up in this volatile environment and it is still unclear to which extent the current global economic slowdown is pronounced, but as explained above, central banks will remain accommodative while we wait for more clarity.

In the near future we expect the U.S. stock market to overperform despite not having done so in January. Indeed, economic surprises for the U.S., as measured by the Citigroup (NYSE:) economic surprise index, has turned positive in early February, a trend not observed in China, nor the Euro Area (see Chart 1). 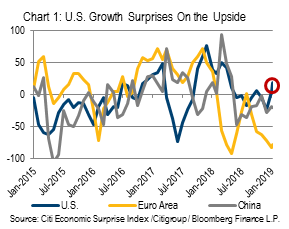 The positive economic momentum in the U.S. is especially seen in the resilience of the U.S. labour market. For instance, last Friday’s job report showed payroll employment increasing by an impressive 304K, much more than anticipated by economists. Moreover, the 12-month moving average of job creation has been trending up for the whole of 2018. This proves once again that the U.S. economy still has the capacity to hire more workers, despite a very low unemployment rate.

Besides, according the Factset, analysts’ downward revisions to 2019Q1 Earnings-per-share (EPS) expectations have reached a point where their y/y growth is now forecasted to be negative for the quarter. While this reflects the anticipated slower momentum ahead, it puts the bar much lower in terms of potential positive EPS surprises. We hedge our overweight equity exposure with defensive sectors such ashealth care and consumer staples. However, we now recommend over-weighting consumer discretionary and the information technology sectors.

In Canada, the combination of strong momentum in both the S&P TSX price index and its 12-month trailing EPS leads us to slightly increase Canadian equities within the context of the entire portfolio. Our recommendation to over-weight the Canadian IT sector played well since the sector gained 10% in January. As in the U.S., we now favour the consumer discretionary sector which should continue to benefit from the current risk-on sentiment.

Finally, in both the U.S. and Canada, we continue to favour the financial sector. They both benefited from the market rally in January as well as a slightly steeper yield curve, as we expected a month ago (see Chart 2).

Regarding Canadian bonds, we slightly underweight the sector to a 45% allocation (see table above). For one, the bearish market sentiment that has led to an important decline in longer-term yields since the beginning of October 2018 has receded. In fact, as mentioned above, both the U.S. and the Canadian yield curve has steepened slightly in the last month (see chart 2 for Canada). 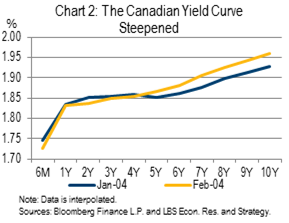 In the near future, we are of the view that the steepening trend will persist and continue to stem from long-term yields, therefore warranting a shorter overall bond exposure, as well as shorter portfolio duration.

We also slightly increased our exposure to corporate bonds since the momentum has shifted dramatically in that segment of the market. First, high-yield spreads as measured by BofAML contracted by 115 basis points in the last month. They are nonetheless still more than 100 basis points wider than they were in early October, before the late-2018 market rout. This keeps them relatively attractive on a valuation basis.

Moreover, in the Canadian market in particular, our team has also noticed an uptick in corporate bond issuances in January, relative to very low issuances late last year (see Chart 3). This therefore signals more appetite from investors for these assets and warrants a slightly higher exposure. 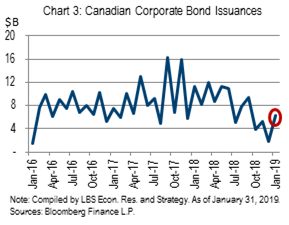