Tuesday, May 7: Five things the markets are talking about

Global equities were mixed overnight as a slew of trade headlines continued to batter markets. U.S. Treasury yields have managed to back up a tad while the U.S. dollar confines itself to “non-volatile” trading range against G10 currency pairs.

Nevertheless, investor sentiment remains tenuous as President Donald Trump’s latest threat to raise tariffs on Chinese goods this Friday from 10 to 25% has certainly shocked financial markets and fuelled worries that this week’s trade talks may be derailed. China’s Vice Premier Liu He has indicated that he and a delegation would still visit the U.S. for trade talks on May 9 and 10.

Down-under, the Reserve Bank of Australia (RBA) left rates on hold, defying expectations it could become the first G10 central bank to enter an easing cycle. The emphasis now shifts to Reserve Bank of New Zealand (RBNZ) later this evening. The market is pricing in a roughly a 50% chance of one. If it happens, expect the NZD to pullback towards its seven-month lows of NZ$ $0.6425.

On tap: China releases trade data this evening, and the U.S. does so on Thursday. South Africa holds national elections tomorrow while China reports on inflation Thursday and the U.S. releases their April CPI report Friday.

In Asia, the was the biggest loser as domestic markets reopened following 10 days of holidays. Missing out on Trump’s tariff threats to China, the Nikkei closed down 1.5% as 27 of the 33 sectors fell. Some electronics and machinery stocks saw big declines on weak guidance issued ahead of the holiday.

Down-under, Australian stocks lost most of their gains after the RBA declined to cut interest rates to help support a ‘slowing’ domestic economy. It was an even split on a cut, but after rising as much as 0.9% intraday, the benchmark stock index ended with just a 0.2% gain. In South Korea, the was down 0.88%, however, after North Korea conducted a round of missile tests on Saturday.

In China, equities staged a “mild technical rebound” but remained volatile after their worst drop in more than 36 months yesterday. The benchmark was 0.7% higher, while the blue-chip CSI 300 rose 0.98%. In Hong Kong, the was up 0.5%.

In Europe, regional bourses are trading mixed, paring earlier highs, following a generally higher session in Asia after China’s Vice Premier Liu said he will visit the U.S. this week for trade talks. 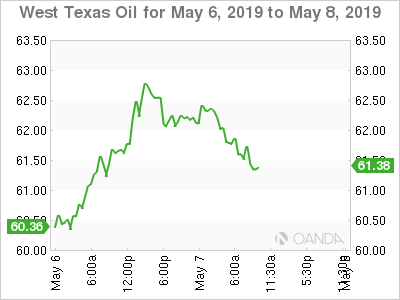 Oil prices trade mixed, pressured by concerns that the escalating Sino-U.S. trade dispute could slow the global economy, while sanctions on Iran and Venezuela is helping to keep the market on edge.

Prices have come under pressure by investor worries that the stalling U.S.-China trade talks could dent global fuel consumption.

On the supply side, oil markets remain tense as the U.S. tightens sanctions on Iranian oil exports, indicating yesterday that it would also boost its military presence in the Middle East.

Note: U.S. sanctions have already halved Iranian exports over the past year to below 1 million bpd, and future shipments are expected to drop to as low as 500K bpd by the end of the month.

Also providing pressure on prices is U.S. data showing an increase in production. U.S. crude production has already surged by more than 2 million bpd since early 2018, to a record 12.3 million bpd. This has made the U.S. the world’s biggest producer.

However, data from Baker Hughes last Friday showed that the number of rigs drilling for gas in the U.S. fell by 3 to 183 in the week to May 3, while oil-directed drilling rigs rose by 2 to 807. 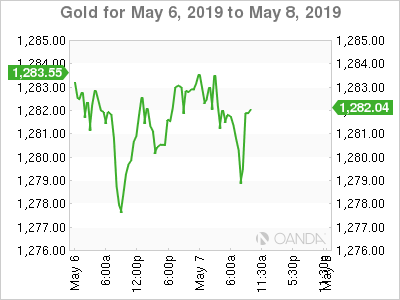 The German 10-year Bund has fallen this morning, pushing back yields despite being well supported, albeit with low volumes. Over the past 24 hours, the markets reaction to the renewed trade tension was quite muted and mainly confined to equity markets. The 10-year Bund yield has rallied to 0.021%. The spread between the 10-year German government Bunds and the Italian government BTP’s has widened slightly – some from rising BTP yields and some from falling Bund yields.

Reserve Bank of Australia (RBA) ignored market pressure to cut in the shape of weak inflation and a slowing domestic economy. Rather, RBA Governor Lowe said, “the job market will steer policy as more unemployment declines are needed to get inflation to the central bank’s 2-3% target range.”

Note: An senate election is next week, and some had speculated a rate cut would have to wait until afterward to avoid political entanglements. 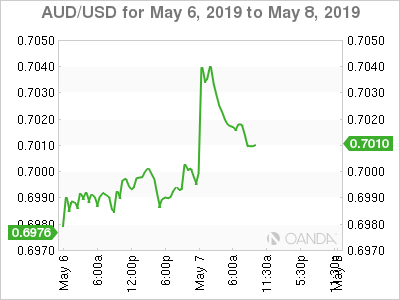 4. Risk on trying to find momentum

The AUD (A$0.7035) rallied after the RBA failed to cut interest rates overnight. However, Aussie ‘bears’ believe the currency strength won’t last if U.S.-China trade tensions escalate – AUD is “the main G10 currency in the firing line if risk sentiment sours. Rate cut odds have now been pushed out to August.

New Zealand’s Institute of Economic Research does not believe that the Reserve Bank of New Zealand (RBNZ) will cut rates later this evening. If it does happen, ‘bulls’ are looking for the NZD to pullback toward last October’s low of NZ$0.6425.

In Turkey, ongoing political uncertainty has pushed the USD up nearly 2% against TRY ($6.1695, up 1.59%). Yesterday; Turkey’s national election board canceled results of the Istanbul mayoral race that President Recep Tayyip Erdogan’s ruling party lost five weeks ago and ordered a rerun. The market believes that the Central Bank of the Republic of Turkey (CBRT) has limited FX ammo to fight a weakening TRY – so we are back in the scope of CBRT needing to hike rates to prevent the lira going much weaker.

China’ yuan (-0.3% to ¥6.7939 offshore) weakened further against the dollar outright overnight, but the pace of losses has slowed, as the market digests Trump’s tariff threats. The onshore yuan also fell 0.3% to ¥6.7789. 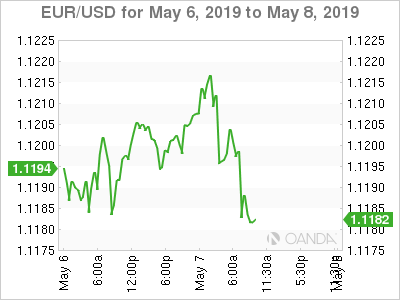 Data this morning from Germany’s Federal statistical Office showed that German manufacturing orders picked up slightly in March, but not enough to compensate the previous months steep fall and held back by weak domestic demand for capital goods.

Total orders for the key sector rose 0.6% m/m, versus market expectations of a 1.2% rise.

“The slight order increase in March is not least due to bulk orders,” the German economics ministry said. Stripping out volatile demand for big ticket items, manufacturing orders would have registered another monthly decline, the ministry added.

Note: Industrial activity in Germany turned down in H2 2018 amid weaker foreign demand and partly reflecting temporary disruptions to production in the key automobile and chemical industries.

“On the whole, the order situation in the manufacturing sector indicates that industrial activity will remain subdued in the coming months,” the economics ministry said. 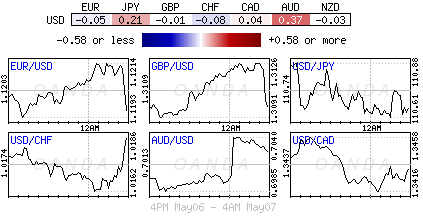