HomenewsFX for BeginnersThe History of Forex

The History of Forex

Forex trading, which is the act of exchanging fiat currencies, is thought to be centuries old – dating back to the Babylonian period. Today, the forex market is one of the biggest, most liquid and accessible markets in the world, and has been shaped by several important global events, like Bretton woods and the gold standard.

It’s important for forex traders to understand the history of forex trading, and the key historic events which have shaped the market. This is because similar events could likely occur again in different, but similar forms – impacting the trading landscape. History tends to repeat itself.

History of Forex Trading: Where it all began

The barter system is the oldest method of exchange and began in 6000BC, introduced by Mesopotamia tribes. Under the barter system goods were exchanged for other goods. The system then evolved and goods like salt and spices became popular mediums of exchange. Ships would sale to barter for these goods in the first ever form of foreign exchange. Eventually, as early as 6th century BC, the first gold coins were produced, and they acted as a currency because they had the critical characteristics like portability, durability, divisibility, uniformity, limited supply and acceptability.

Gold coins became widely accepted as a medium of exchange, but they were impractical because they were heavy. In the 1800s countries adopted the gold standard. The gold standard guaranteed that the government would redeem any amount of paper money for its value in gold. This worked fine until World War I where European countries had to suspend the gold standard to print more money to pay for the war.

The forex market was backed by the gold standard at this point and during the early 1900s. Countries traded with each other because they could convert the currencies they received into gold. The gold standard, however, could not hold up during the world wars.

Key events which have shaped the forex market

Throughout history, we have seen major events that have greatly influenced the forex trading environment. Here are some highlights: 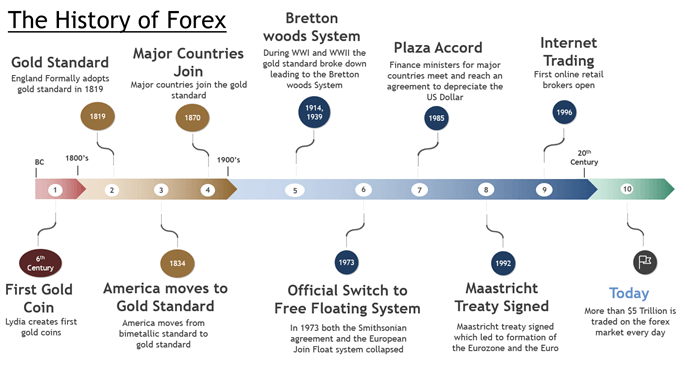 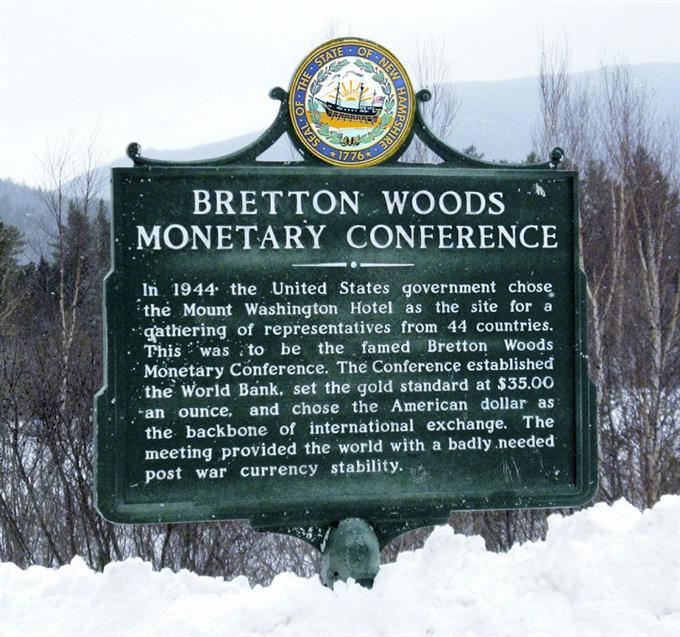 The first major transformation of the forex market, the Bretton Woods System, occurred toward the endof World War II. The United States, Great Britain, and France met at the United Nations Monetary and Financial Conference in Bretton Woods, NH to design a new global economic order. The location was chosen because at the time, the US was the only country unscathed by war. Most of the major European countries were in shambles. In fact, WWII vaulted the US dollar from a failed currency after the stock market crash of 1929 to benchmark currency by which most other international currencies were compared.

The Bretton Woods Accord was established to create a stable environment by which global economies could restore themselves. It attempted this by creating an adjustable pegged foreign exchange market. The US dollar was being pegged to gold, because the US held the most gold reserves in the world at that time. So foreign countries would transact in the US Dollar (this is also how the US dollar became the world’s reserve currency).

The Bretton Woods agreement eventually failed to peg gold to the US dollar because there was not enough gold to back the amount of US Dollars in circulation. In 1971, President Richard M. Nixon, ended the Bretton Woods system which soon led to the free floating of the US Dollar against other foreign currencies.

The Beginning of the Free-Floating System 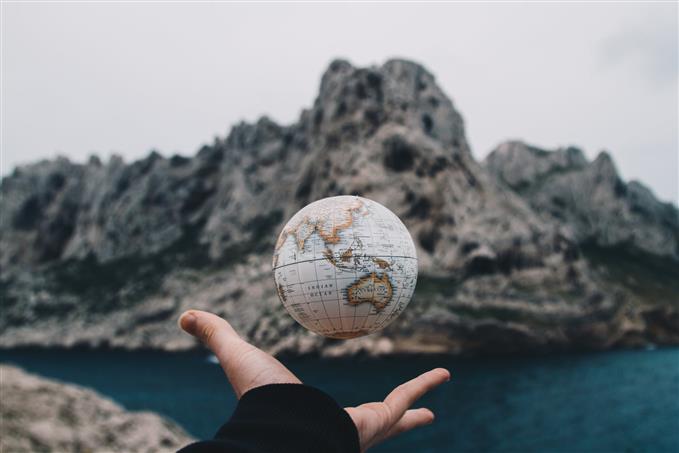 After the Bretton Woods Accord came the Smithsonian Agreement in December of 1971, which was similar but allowed for a greater fluctuation band for the currencies. The United States pegged the dollar to gold at $38/ounce, thereby depreciating the dollar. Under the Smithsonian agreement, other major currencies could fluctuate by 2.25% against the US Dollar, and the US Dollar was pegged to gold.

In 1972, the European community tried to move away from its dependency on the US Dollar. The European Joint Float was then established by West Germany, France, Italy, the Netherlands, Belgium, and Luxemburg. Both agreements made mistakes like the Bretton Woods Accord and in 1973 collapsed. These failures resulted in an official switch to the free-floating system.

In the early 1980s the dollar had appreciated greatly against the other major currencies. This was hard on exporters and the US current account subsequently ran a deficit of 3.5% of GDP. In response to stagflation that began in the early 1980s, Paul Volcker raised interest rates which caused a strong US Dollar (and decreased inflation) at the expense of the US industry’s competitiveness in the global market.

The weight of the US dollar was crushing third-world nations under debt and closing American factories because they could not compete with foreign competitors. In 1985, the G-5, the most powerful economies in the world – US, Great Britain, France, West Germany, and Japan – sent representatives to what was supposed to be a secret meeting at the Plaza Hotel in New York City. News of the meeting leaked, forcing the G-5 to make a statement encouraging the appreciation of non-dollar currencies. This became known as the “Plaza Accord” and its reverberations caused a precipitous fall in the dollar.

It did not take long for traders to realize the potential for profit in this new world of currency trading. Even with government intervention, there still were strong degrees of fluctuation and where there is fluctuation, there is profit. This became clear a little over a decade after the collapse of Bretton Woods.

Establishment of the Euro 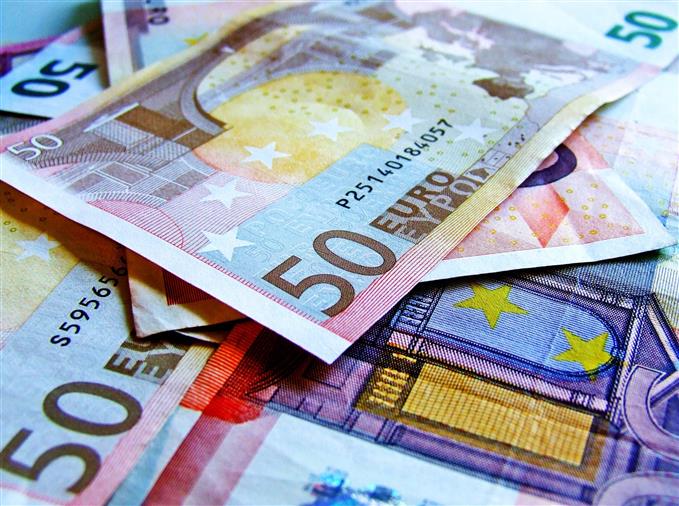 After WWII, Europe forged many treaties designed to bring countries of the region closer together. None were more prolific than the 1992 treaty referred to as the Maastricht Treaty, named for the Dutch city where the conference was held. The treaty established the European Union (EU), led to the creation of the Euro currency, and put together a cohesive whole that included initiatives on foreign policy and security. The treaty has been amended several times, but the formation of the Euro gave European banks and businesses the distinct benefit of removing exchange risk in an ever-globalized economy.

In the 1990s, the currency markets grew more sophisticated and faster than ever because money – and how people viewed and used it – was changing. A person sitting alone at home could find, with the click of a button, an accurate price that only a few years prior would have required an army of traders, brokers, and telephones. These advances in communication came during a time when former divisions gave way to capitalism and globalization (the fall of the Berlin Wall and the Soviet Union).

For forex, everything changed. Currencies that were previously shut off in totalitarian political systems could be traded. Emerging markets, such as those in Southeast Asia, flourished, attracting capital and currency speculation.

The history of forex markets since 1944 presents a classic example of a free market in action. Competitive forces have created a marketplace with unparalleled liquidity. Spreads have fallen dramatically with increased online competition among trustworthy participants. Individuals trading large amounts now have access to the same electronic communications networks used by international banks and merchants.

Forex trading today and in the future

Today, the forex market is the largest market in the world. More than $5 trillion is traded on the forex market daily. The future of forex is shrouded in uncertainty, and is ever changing, leading to everlasting opportunities for forex traders.

For forex traders to succeed in an evolving market they need to stay ahead of the curve. DailyFX news and analysis keeps traders up to date with the latest forex events, and our live forex rates document real time currency data. For forex trading insights from the experts, our weekly trading webinars are a free and reliable resource.

And if you are new to forex we recommend downloading our free Forex for Beginners guide to learn the basics.