HomenewsMarket OverviewThe Recession Indicator Everyone Is Talking About

The Recession Indicator Everyone Is Talking About

Welcome to the Labour Day weekend.

As we prepare to mark the last holiday Monday of this fine summer of 2018, what better way to spend a portion of it than discussing the yield curve!

Now, I fully understand if you, at this point, elect to set this message aside and go do something, well, you know, fun. But do come back. Your financial well-being may count on it, at least in the short- to medium-term. Because in this Labour Day edition of Take Stock, we’re going to address a topic that’s been grabbing headlines of late.

First though, what on earth is a yield curve? Here at The Fool, we love to talk stocks. It’s kinda our thing. The yield curve, however, resides in Bondland.

So what on earth are we doing discussing it here in what’s supposed to be a stock oriented piece?

Ah, bonds. Where I cut my teeth in the institutional investing industry. Good times. When you “buy” a bond, you’re actually lending the entity from which you “bought” it from money. When you lend money, payback uncertainty tends to go up the longer that loan is outstanding. Therefore, lenders typically require more compensation for longer dated loans. In other words, a lender might require a 3% interest rate on a two-year loan and a 6% interest rate on a five-year loan. After all, lending money for five years involves more payback uncertainty than two years. Makes sense, right?

All the yield curve does is plot a series of loan terms and a respective yield for each. Generally, short-term loans (bonds) carry a lower yield than longer term bonds. With this in mind, consider that the natural shape of the yield curve is upward sloping. Allow me to illustrate with a hypothetical depiction: 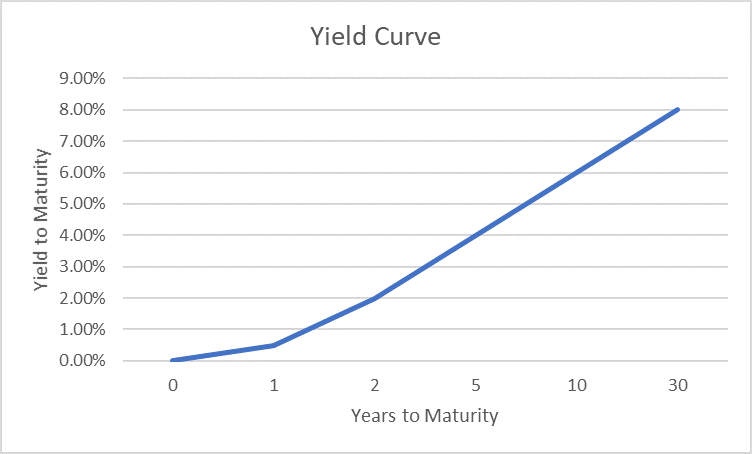 The implied interpretation of this “normal” yield curve is that there’s an expectation that interest rates will be higher in the future, which, in turn, implies economic strength in the years ahead. In other words, the bond market likes where the economy’s headed. Bringing it around to stocks, this should be good for equities. So, buy ‘em! Here’s the thing. Currently, the shape of the yield curve that matters the most – that is, the U.S. Treasury’s Yield Curve – doesn’t really look anything like this. Check it out: 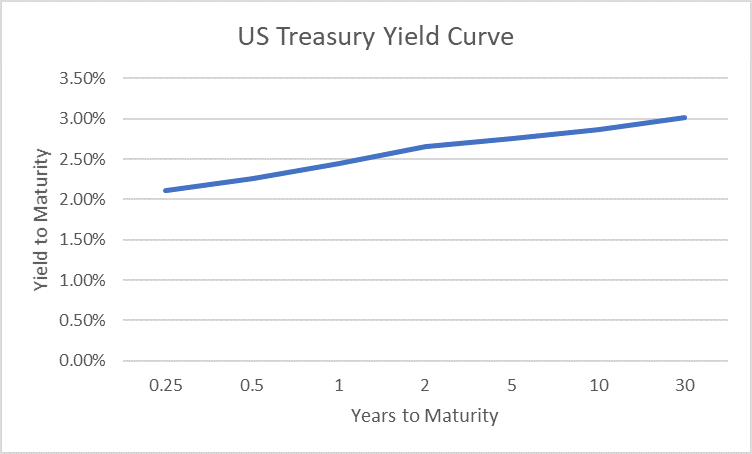 To be clear, right now you can lend the U.S. Treasury (and when it comes to interest rates, it’s all about the U.S.) money for 3 months and receive a rate of 2.11%. Or, you can lend the U.S. Treasury money for 30 years and receive a rate of 3.0%. To compensate you for that 29 years, 9 months of extra risk, you get paid a whopping 89 extra basis points. This, Fools, is the bond market saying, in the future, interest rates are at best going to be flat with where they are today. Which implies something much less than the economic strength implied by our hypothetical curve above. And again, bringing it around to stocks, this is something worth considering before ploughing your life savings into the market. As a more static economy tends not to provide much fuel for Mr. Market to run ever higher.

OK, with that background out of the way, let’s get to the real topic du jour. Yield Curve Inversion. Here’s what has the financial media all in a huff these days. What we have right now, and what’s illustrated above is a very flat yield curve.

History, however, says, we need to be wary if the yield curve inverts.

That is, shorter-term rates exceed longer-term rates. Which means, the bond market expects rates to be lower in the future, which implies a weaker economy – even a recession. (I’m glossing over a pile of nuance, but this is the general drift.) Read through for stocks, even more muted returns, at best, than implied by the current flattened curve. Indeed, an inverted yield curve has proven to be a somewhat reliable forward indicator when it comes to the U.S. (and, indirectly, Canadian) economy. In fact, each of the last seven slumps experienced in the U.S. has been preceded by an inversion of the curve. That said, an inversion of this relationship does not indicate immediate danger.

So, a pure, money-in-the-bank prophecy this is not. As with all things in the investment world, a grain of salt is required. But history has demonstrated it’s a relationship that’s worth keeping an eye on.

Foolish Bottom Line: We’re not saying go out and buy cans of soup and build a bunker 20 feet down. Far from it. We are saying that given that markets remain on a historic tear (some say this is the longest bull run ever, for the U.S. anyways) you need to keep your eyes on the speed limit signs as they pass. The current, flat yield curve is just that. If you’re going 120km/h in an 80km/h zone with your portfolio right now, you might want to take the foot off the accelerator. At least a touch.