This Could Be The Next Currency To Fall

The traded higher against most of the major currencies Tuesday after Federal Reserve Vice Chairman Richard said he backed gradual rate hikes with an eventual move toward neutral rates. Although he also admitted that they don’t really know where the neutral level is and expressed concern about lower inflation expectations, investors were singularly focused on the talk of more rate hikes. They ignored his concerns about capital expenditure as well as Fed President ’s warnings about slower growth over the next 2 years. With that in mind, the U.S. economic reports did help the greenback. Aside from the increase in house prices, the decline in the Conference Board’s was modest with the index pulling back only slightly from 18-year highs. As a result, the U.S. dollar extended its gains against all of the major currencies except for the and dollars.

There were 3 key moves in Tuesday’s FX – ’s break of 1.13, ’s decline toward monthly lows and ’s extended breakout. But the currency pair that we are watching most closely is because there are a number of reasons why it could be the next currency to fall. Most importantly, all signs point to the US getting tougher on Chinese trade. Despite an upcoming meeting between Presidents Trump and Xi, the US Administration continues to downplay the possibility of an agreement. WH Chief Economic Advisor said that he was disappointed by trade talks so far and Trump is ready to add tariffs on China. While this could be a political move to surprise after downplaying expectations, for the time being, these comments reaffirm our view that the meeting will result in nothing substantial. An intensification of trade tensions hurts the and the outlook Australia’s economy. The Chinese is already exceptionally weak and any further pressure on growth could cause the Chinese government to depreciate the currency further, lowering the purchasing power of Chinese importers and in turn the demand for Australian exports. have also fallen sharply over the past few days and these moves could catch to the Australian dollar. We’re already beginning to see a move lower as AUD/USD ends the day below the 20-day SMA for the first time this month and with that the next stop should be the November low of .7165.

5 Reasons Why AUD Could Be Next Currency to Fall 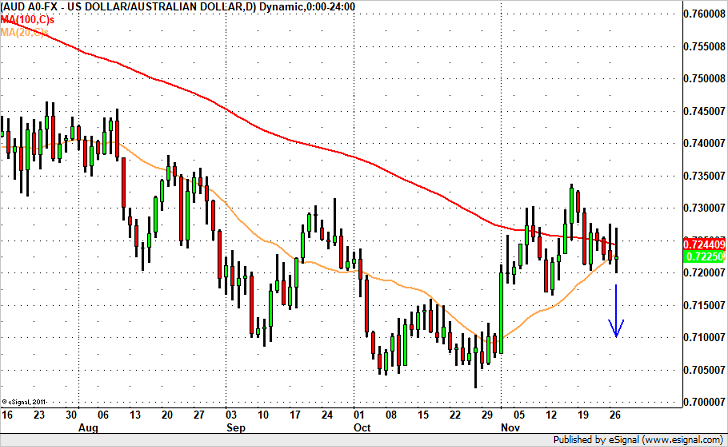