Capital markets remain uneasy as growing geopolitical tensions rattle equities and commodities. Adding fuel to the fire is yesterday’s showing that most officials are leaning towards a faster pace of tightening as their growth outlook and confidence in hitting inflation targets strengthened.

“The appropriate path for the federal funds rate over the next few years would likely be slightly steeper than they had previously expected,” the FOMC said in its March minutes. Most Fed officials penciled in two or three more moves this year, and didn’t see a significant effect from steel and aluminum tariffs.

Fed officials expect the Republican tax plan to deliver “a significant boost” to the economy over coming years, though some expressed wariness about its fiscal sustainability – higher budget deficits could eventually drive up interest rates and pose a threat to the U.S. economic outlook.

Elsewhere, U.K. ministers are planned to gather later this morning to discuss whether to join the U.S. and France in a possible military attack on Syria that threatens to bring the west and Russian forces into direct confrontation.

Euro equities are drifting after Asian shares declined as investors digested the latest signals from the U.S. Fed on monetary policy and escalating tensions in the Middle East.

In Japan, stocks pulled back overnight as worries about possible U.S. military action against Syria curbed investor risk appetite, while earnings reports kept the retail sector in the spotlight. The share average ended down -0.1% while the broader lost -0.4%.

Down-under, the Aussie’s shares slid overnight on the threat of an imminent U.S. attack on Syria and China’s commerce ministry saying that trade negotiations with the U.S. would be impossible. The slipped 0.2%, while in South Korea, the fell 0.06%.

In Hong Kong, stocks shed early gains to end lower on Thursday, as caution prevailed amid rising tensions in the Middle East. The closed down 0.2%, while the ended 0.3% lower.

In China, stocks ended lower on Thursday, weakened by financial and transport stocks, as investors were rattled about possible U.S. military action in the Middle East. The blue-chip index ended down 1%, while the closed 0.9% lower. 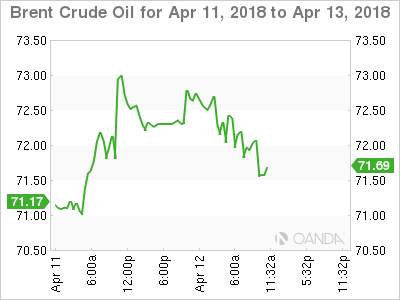 Oil prices trade atop of their three-year highs, with U.S. futures jumping as much as +3%yesterday amid the geopolitical turmoil.

Note: Both Brent and WTI on Wednesday hit their highest since late 2014 at $73.09 and $67.45 a barrel, respectively, after the Saudi’s said it intercepted missiles over Riyadh and Trump warned Russia of imminent military action in Syria. 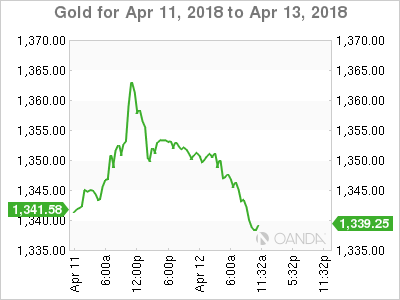 FOMC minutes yesterday showed officials leaning towards a slightly faster pace of tightening at their March meeting as their growth outlook and confidence in hitting inflation targets strengthened.

Down-under, the Reserve Bank of Australia (RBA) plays it straight with its own rate outlook. In his speech yesterday, RBA Gov. Lowe’s said that the economy is likely to improve, the next rate move is probably up, and only a gradual pickup in wages and prices is expected. On top of that, Lowe said the RBA board does not see a strong case for a near-term adjustment in monetary policy. 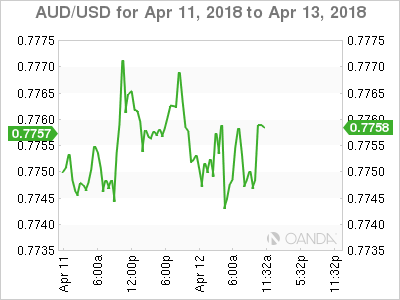 (€1.2336) trades relatively flat ahead of the U.S open, in a quiet market overnight, with the U.S. still weighing its options on Syria.

The USD rallied immediately after the Fed minutes were published on Wednesday, given that quite a few members seemed in favour of higher interest rates.

Since then, the EUR/USD has nearly recovered its level prior to the minutes. The is also flat, at ¥106.84. Later this morning, the ECB minutes are published and market is anxious to see whether any early discussions on rates took place.

Elsewhere, is steady at £1.4170, while the (€10.3860) hit a nine-year high after Sweden’s March CPI came in below expectations. Many are beginning to push back their view for the first potential rate hike by Sweden Riksbank from Sept to Dec.

In Russia, the RUB rout continues – triggered by the most punitive U.S. penalties to date. The currency has slumped to a 16-month low and yields on local debt surged to the highest level this year. 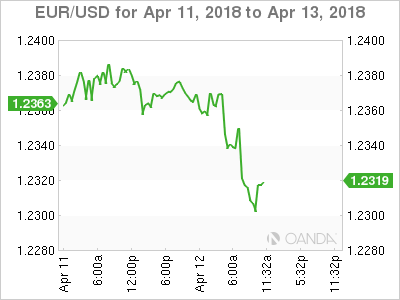 Data this morning showed that industrial production (IP) in the eurozone fell for a third consecutive month in February, an indication that economic growth may be slowing as the ECB faces key decisions over its stimulus programs.

Euro stats showed that the output of factories, mines and utilities was 0.8% lower than in January, the largest m/m drop in two years. The markets expectations were for a 0.2% increase.

Note: In December, IP fell by 0.1%, and in January by 0.6% – the three-month stretch of declines was the longest since September through November 2012.

Some of the weakness in IP reflects temporary factors that should not act as a drag on growth in the months to come. A spell of unusually cold weather across Europe has been a hindrance to activity.

Signs of weaker growth supports ECB Draghi’s view that the central bank needs to move cautiously as its phases out QE. 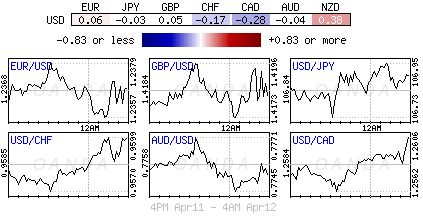