European equites are under pressure while U.S. futures tread water as investors continue to analyze a plethora of corporate earnings against a backdrop of global growth concerns.

Note: To date, +80% of companies results have beaten market expectations.

The ‘big’ dollar continues to trade atop of its four-month high against G10 currency pairs, while U.S. Treasuries are little changed alongside German Bunds which again trade in negative territory.

The EUR is printing new two-year lows outright, while the yen found some temporary support after the Bank of Japan cut its economic growth forecasts and committed to keeping rates low. Sterling is little changed despite some Conservative party members wanting to know when Prime Minister Theresa May would be leaving. The Swedish kroner, similar to the loonie’s reaction yesterday, has been stunned by the Riksbank ‘dovish’ tone after this morning’s interest rate announcement (see below).

On tap: Japan’s Shinzo Abe will meet EU leaders today before flying to the U.S. for a summit with President Donald Trump. All eyes are on tomorrow’s advance Q1 U.S. GDP release (08:30 am EDT). Investors are looking for clues on how the U.S. economy responded to Trump’s government shutdown and fallout from the Q4 market rout.

In Japan, the Nikkei rallied to a five-month high overnight as a number of corporate earnings turned out to be ‘less bad’ than the market had feared. Japan’s central bank was also supportive, revising its guidance to say it expected not to increase interest rates for at least another year. The rallied 0.48%, while the broader rallied 0.51%.

Down-under, Australia’s was closed for ANZAC day. In South Korea, the Kospi index was down 0.5% after a fourth-straight month of declining exports dragged on the local economy. South Korean GDP shrank in Q1 by 0.3%, its worst performance in more than a decade.

Stocks in China and Hong Kong were also lower even though the People’s Bank of China (PBoC) signalled support for the economy by saying it had no intention of tightening monetary policy. At the close, the index was down 2.23%, while the blue-chip CSI300 index slipped 2.19%. In Hong Kong, the was down 0.86%. 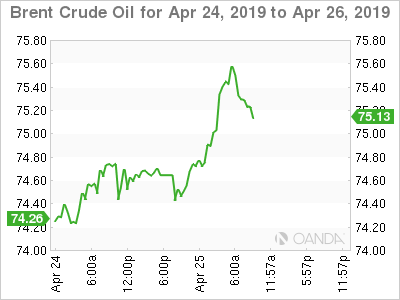 (BCO) oil has rallied above $75 a barrel for the first time this year on the back of tighter sanctions on Iran, while gains in West Texas Intermediate (WTI) have been curtailed by a surge in U.S. supply.

Brent has been receiving support from a halt of Russian oil exports to Poland and Germany via a pipeline due to quality concerns and also from the U.S. announcement this week that it would end all exemptions for sanctions against Iran, demanding countries to halt oil imports from Tehran from May.

Weighing on U.S. prices is data from the API last week showing that stocks rose by 6.9 million barrels, more than expected, while U.S. commercial crude oil inventories hit an October 2017 high of 460.63 million barrels, according to the EIA’s report yesterday. That was a rise of 1.3 million barrels.

Ahead of the U.S. open, gold prices have edged a tad higher as a dip in equities and weak South Korean GDP data overnight is raising some red flags about the pace of global economic growth. Nevertheless, a stronger USD is capping gold price gains. has rallied 0.2% to $1,277.72 per ounce, while U.S. are steady at $1,279.60 an ounce. 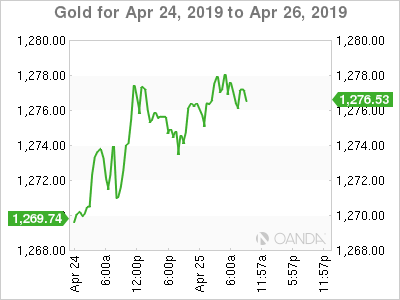 Earlier this morning Sweden’s Riksbank tweaked its forward guidance so that the Repo Rate would remain at current level for somewhat longer period of time than was forecasted back in February – the next potential rate hike is near year-end or in early 2020 (revised from H2 of 2019). The Riksbank also extended its QE program and would buy government bonds for nominal value of SEK45B from July 2019 to December 2020.

In Japan, the Bank of Japan kept its policy steady but clarified its forward guidance to reinforce it will not hike anytime soon. Governor Kuroda in his press conference stated that it was “possible that the time frame under forward guidance could exceed the spring of 2020 thus could keep low rates beyond that time period.” He reiterated that a “virtuous economic cycle was in place but consumer prices had remained somewhat weak,” and expects CPI to pick up towards the 2% target “gradually but likely would take time.”

Elsewhere, German 10-year Bund yields dropped back into negative territory yesterday and are lower this morning at 0.017%. also fell yesterday, but are marginally higher ahead of the U.S. open at 2.523%. 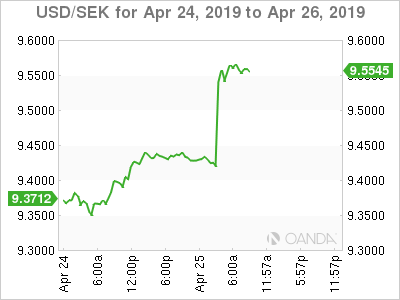 The USD continues to hold onto its recent gains as weak overseas inflation and GDP data support the ‘buck.’

The Canadian dollar (C$1.3517) is weaker, trading at its lowest level outright, since early January, after the Bank of Canada held its key interest rate steady yesterday and lowered its growth forecast for this year, signalling that further rate increases are unlikely in the near term. By dropping any reference to future rate hikes, Governor Stephen Poloz delivered his most ‘dovish’ signal in two years.

(€1.1136) is trading softer and is not too far off its July 2017 low print. The recent soft IFO data out of Germany this week is not helping the currency nor are the economic and political concerns in Italy. The ECB’s recent economic bulletin also stressed that risks in the Eurozone are “tilted to the downside.”

(¥111.79) could not sustain any momentum above the psychological ¥112 handle despite the BoJ keeping its monetary policy steady and clarifying its forward guidance to reinforce it would not hike anytime soon.

The SEK ($9.5601) has come under extreme pressure outright (down -1.46%) after the Riksbank put a more dovish spin on its rate path. Riksbank tweaked its forward guidance so that the Repo Rate would remain at current level for longer. is higher by over 1.25% to test above €10.65 level. 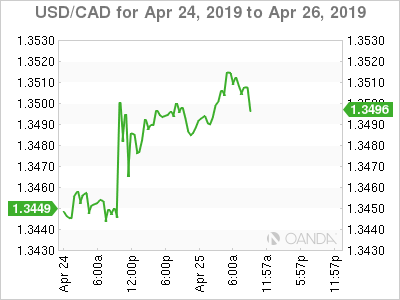 Data from the Confederation of British Industry (CBI) this morning showed that retail sales grew for the first time since November 2018 in the year to April.

The survey of retailers, showed that sales volumes rose for the first time in five months, likely supported by the later timing of Easter this year.

49% of retailers said that sales volumes were up in April on a year ago, while 36% said they were down, giving a balance of +13%. This was broadly in line with expectations (+15%)

Digging deeper, orders placed on suppliers also grew and are expected to pick up further in the month ahead, with sales volumes also set to see somewhat faster growth.

Note: The readings are an indicator of short-term trends in the retail and wholesale sector of the UK economy. 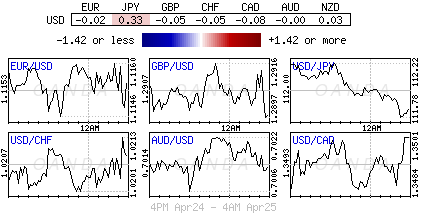