The U.S. dollar has rallied for the first time in six sessions as the markets waits for rhetoric from Jackson Hole, where a meeting of global central bankers begins this evening.

Yesterday, the Federal Reserve signalled a ‘no change’ to its pace of monetary policy tightening, allowing the greenback to climb against most of its peers.

U.S. Treasuries are steady after the Fed indicated they are prepared to increase rates again if the economy stays on track. Yesterday, the Fed minutes point to another interest-rate increase next month.

“Many participants suggested that if incoming data continued to support their current economic outlook, it would likely soon be appropriate to take another step in removing policy accommodation,” according to the minutes. Most officials signalled they are keen to raise rates to a level that “neither spurs nor slows growth” – the so-called “neutral rate.”

Alongside U.S. President Donald Trump’s legal woes, the market is also trying to gage the imposition of new tariffs between the U.S. and China in the midst of talks aimed at averting the worsening trade conflict.

In Japan, the edged a tad higher after a weak yen (¥110.89) supported sentiment, however, German profit warnings dragged down auto stocks and tire makers. The Nikkei share average ended 0.2% higher, while the broader was unchanged.

Down-under, Aussie shares fell overnight, as uncertainty over whom the country’s next PM would be distressed investor confidence, with losses in financials capping gains in resources stocks. The S&P index lost 0.3%. In South Korea, the stock index advanced 0.4% overnight, even though fresh U.S.-China tariffs weighed on the market.

In China, stock markets ended higher, as investors mostly looked past new U.S. and Chinese tariffs that mark the latest escalation of the trade war between the world’s two largest economies. The index ended 0.4% higher, while the country’s blue-chip index gained 0.3%. 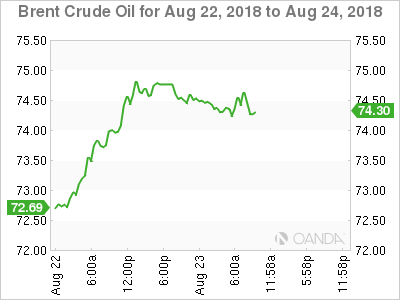 Oil prices have slipped as the U.S.-China trade dispute outweighs the bullish impact of a decline in U.S. crude inventories.

Note: The trade dispute between the world’s two largest economies has deepened today with the imposition of another 25% tariffs on $16 billion worth of each other’s goods.

Bullish for crude was yesterdays data from the EIA which showed that U.S. commercial inventories fell by 5.8 million barrels in the week to Aug. 17 to 408.36 million barrels.

Ahead of the U.S. open, gold prices were under pressure, falling from their one-week high from yesterday, as intensifying Sino-U.S. trade war with another round of tariffs and expectations of higher interest rates support the dollar. is down 0.6% at $1,188.16 an ounce. U.S. are down 0.7% at $1,194.80. 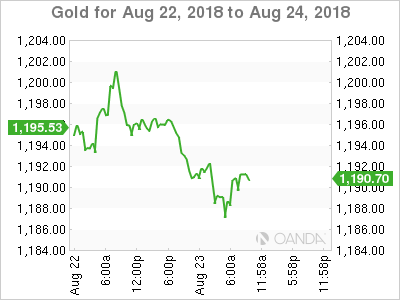 The Tsy-Bund spread is at up 247 bps – the tightest in two months as the eurozone economy and inflation shows signs of improvement and the market questions how long the U.S. economic strength will last. There is no supply in the eurozone today and the 10-year Bund yield is trading at +0.35%, down 1 bps. Other eurozone bond yields are mostly unchanged, except Italian bonds – the 10-year BTP yield has declined 4 bps to 3.026%. 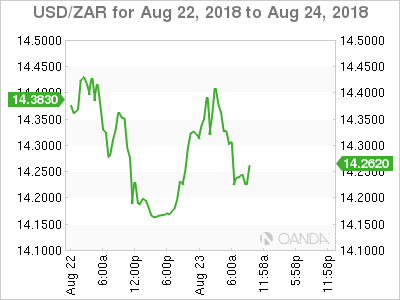 The USD is a tad firmer overnight, breaking a six-day losing streak aided by yesterday’s Fed minutes that signalled another rate rise is coming. Market concerns over the Sino-US trade negotiation is again a pressing issue now that the U.S. has implemented another round of tariffs.

(£1.2868) is a tad softer as Brexit negotiations continue and the was back below the psychological A$0.73 at A$0.7294 after Australia adjourned its parliament until Sept. 10 amid a political leadership crisis. PM Turnbull is seen as unlikely to contest another leadership vote.

Among the biggest currency losers overnight is South Africa’s rand ($14.2920), which slumped after a tweet from Trump fuelled speculation of possible sanctions against the country. 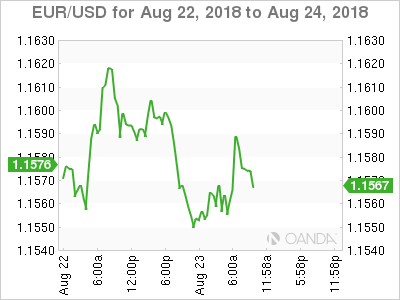 Flash PMI survey data this morning indicated that the eurozone economy continued to grow this month, albeit with the rate of expansion remaining one of the weakest seen over the past 18 months, while companies’ expectations of future growth slipped to the lowest for nearly two years.

The IHS Markit Eurozone Composite (manufacturing and services) PMI edged a tad higher from 54.3 in July to 54.4 in August.

Digging deeper, the rise signalled a marginal acceleration of output growth during the month. However, the increase in output was the third weakest since January 2017. New order growth picked up marginally, but, was the third weakest since December 2016. A particularly sluggish performance was seen in manufacturing, where new export orders registered the smallest monthly rise for two years.

Although growth rates improved slightly in manufacturing and services, both remained among the weakest seen for at least 18 months. 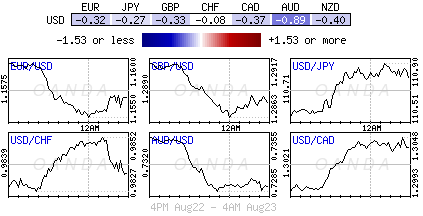