Capital markets were probably too optimistic that some concessions would be announced at the end of three-day trade talks this week between the world’s two largest economies – investors seem to prefer to wait for concrete details in the negotiations before mapping out the next leg of investments.

The dollar is steady, while prices have pulled back a tad after climbing above $52 a barrel and entering a bull market. U.S. Treasuries are leading a broad advance in sovereign bonds.

Aside from trade negotiations, investors will be watching closely as Fed Chair Jerome Powell gives a speech at the Economic Club of Washington this afternoon.

The market is looking for signs that the Fed will pause or significantly reduce its cycle of rate increases this year. Thus far, there are no signals of a Fed U-turn on interest rates, but market pressure is mounting. U.S. policy-makers to date have been less data dependent, and more agile in order to respond swiftly to changing conditions.

Note: Minutes from the Fed’s Dec.18-19 meeting revealed that several U.S. policy-makers were in favour of keeping rates steady this year.

Domestically, the ongoing partial U.S. government shutdown is also weighing on market sentiment ahead of earnings season and coupled with China’s disappointing inflation data overnight, investors have a right to be worried about slowing growth in the world’s second-biggest economy.

On tap: The U.K. Parliament resumes a debate on the Brexit withdrawal bill – a vote is set for the week of Jan. 14.

In Japan, the Nikkei’s three-day winning streak came to an end overnight on profit taking as the yen (¥108.09) firmed. After rallying just over 4% in the last three days, the share average ended 1.3% lower, while the broader dropped 0.9%.

Down-under, an afternoon rebound allowed the stock benchmark to finish higher, giving the its fourth-straight gain. The index rose 0.3% – digging deeper, commodities and utilities rallied 0.8%, while consumer staples lost 2%. In South Korea, the edged down 0.7% ahead of Thursday’s expiration of options contracts.

In China, equities shed their earlier gains to end lower overnight on worries about sluggish domestic economic growth, while the enthusiasm over the Sino-U.S. trade negotiations and policy support faded. At the close, the index fell 0.4%, while the blue-chip index was down 0.2%.

An outlier was Hong Kong equities, stocks rallied for the fifth consecutive session, as a cautious Fed and a firmer yuan lifted market sentiment. At the close of trade, the was up 0.2%, while the index rose 0.4%.

In Europe, regional bourses trade mostly lower on profit taking following on from weakness in Asia and lower U.S. futures. 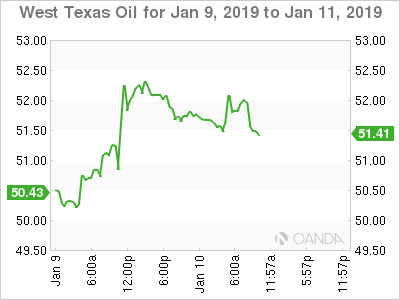 Oil prices fell more than 1% overnight due to the lack of clear guidance from the Sino-U.S. trade talks and on data that again indicated an increase in fuel stocks stateside.

A number of analysts have begun to cut their 2019 oil price forecasts by more than 10% this week, citing weaker economic growth expectations and rising oil supply, especially from the U.S. Consensus now expects Brent to average around $61 a barrel this year, down from a previous estimate of $69, and U.S. crude to average $54, against a previous forecast of $60.

Note: The main source of new supply is the U.S. – according to EIA data, crude oil production stateside remains at a record 11.7 million bpd in the week ended Jan. 4 and is leading to record fuel inventories.

Crude oil prices have been receiving support from supply cuts that started at the end of last year by OPEC+. However, to balance the market would require OPEC discipline to continue well into next year.

Ahead of the U.S. open, gold prices have found support as growing expectations that the Fed will pause its rate tightening cycle this year and an impasse between U.S. President Donald Trump and Democrats on funding for a border wall is weighing on the dollar. is up 0.2% at $1,295.83 per ounce, atop of last Friday’s peak of $1,298.42. U.S. have gained 0.4% to $1,297.20 per ounce. 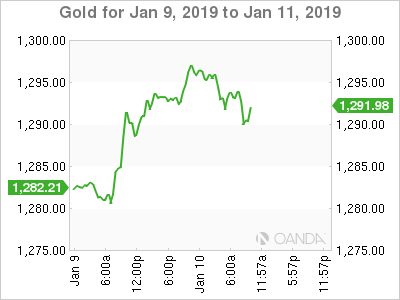 3. Europe takes down a record supply of product

Eurozone sovereign bond yields are a tad lower with the overall minor moves indicating that the market was able to take down this weeks record supply with some ease – syndicated supply came from Slovenia, Belgium, Portugal, Ireland.

Many Fed Members believed they could afford to be patient about further policy tightening given muted inflation pressures of last month meeting, with a few noting that they “should assess impact of risks that had become more pronounced in recent months.” 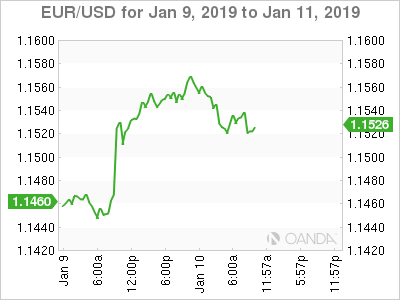 The ‘mighty’ USD began this mornings EU session on the softer side on rising bets that the Fed would soon implement a ‘pause’ in the current tightening cycle or significantly reduce its pace of rate increases this year. Investors continue to look for clarity – will Fed Chair Powell provide some color at today’s talks at the Economic Club in Washington?

(€1.1525) trades atop of its highest levels in a couple of months. Earlier in today’s session dealers witnessed a EUR ‘short squeeze’ to a nine-day high print of €1.1571. The longer the single unit stays above the psychological €1.15 handle, the techies seem more confident that they will a €1.1620 print in the short term.

Overnight, China guided the yuan to its strongest level outright since late August. The People’s Bank of China (PBoC) fixed the midpoint for trading at ¥6.8160/dollar, compared with ¥6.8526 Wednesday. The USD ended ‘onshore’ Chinese trading yesterday at ¥6.8330.

is lower by 0.2% at £1.2760 area as PM May seeks EU assurances on the backstop provision. Last night, the U.K. government lost a second consecutive vote – an amendment to the withdrawal agreement which changed the time Prime Minister Theresa May has to come back with a plan B in the event of a defeat next week. Previously it was 21 days, it’s now three and had support from 20 Tory rebels again. 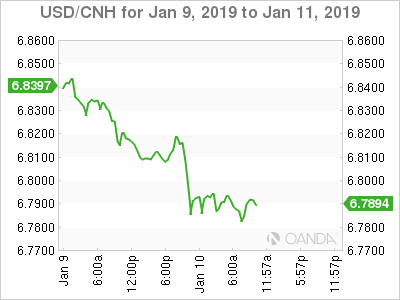 Data overnight from China showed that both consumer and producer prices ‘decelerated’ sharply last month, making it even harder for authorities to improve a “sluggish demand in a deepening economic downturn.”

Consumer prices rose in December at their slowest pace in six months, 1.9% y/y, while prices charged by producers increased by the lowest rate in 24 months, at 0.9%.

The disappointing headline prints have many raising the alarm about the rising risk of deflation in the Chinese economy. Other weaker recent data, such as factory orders, retail sales and exports, point to a slowing economy, which puts more pressure on Beijing to resolve their trade fight with the U.S. sooner rather than later. 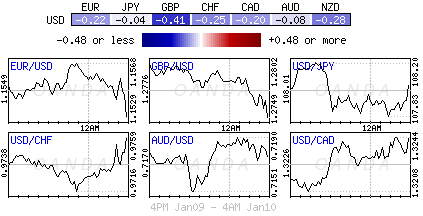