Currently, there are many moving parts that are keeping capital market players on their toes. U.S. President Donald Trump and German Chancellor Angela Merkel continue to deal with immigration policy worries, while trade and tariffs tops most central bankers and other leaders’ agendas.

This morning, European stocks have gained alongside U.S. futures, while emerging-market stocks slid. The pound has come under some pressure ahead of the Bank of England (BoE) rate decision in a few hours while has slipped below $66 a barrel ahead of tomorrow’s crucial OPEC meeting that will decide on output.

With trade concern, majority of investors are looking for surety, and with the U.S. ‘bullish’ on growth and the Fed raising rates, U.S. assets continue to look appealing and reason enough why the U.S. dollar remains so bid.

In Japan overnight, the share average rallied as concerns over Sino-U.S. trade issues appeared to recede, while technology stocks rallied on the back of U.S. tech stocks strong performance Wednesday. The Nikkei index rose 0.61%, while the broader fell 0.12%.

Note: The market is also being supported by expectations that June dividend payouts would be reinvested. Estimated dividend payout over the next fortnight is $41B.

Down-under, shares rallied overnight with financials and materials stocks leading the gains – a weaker AUD is supporting foreign interest. The rose about 1%. In South Korea, the fell 1.1%.

In Hong Kong, stocks closed out atop of their six-month low, as Sino-U.S. trade conflict fears continue to curb risk appetite. The ended 1.4% lower, while the closed lower by 1.2%.

In China, equities shed early gains to end lower, with the benchmark Shanghai index closing at a two-year low on lingering trade worries. The blue-chip index closed down 1.2%, while the ended 1.4% lower.

In Europe, regional bourses are off the highs ahead of the U.S. open, lead by the , which is weighed, lower by automakers – Daimler profit warning citing potential auto-tariffs and clamp down on diesel emission cars. 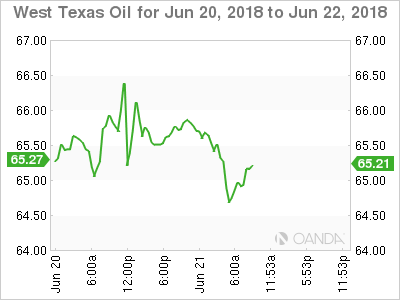 Oil prices remain under pressure, as OPEC crude exporters appear to be nearing a deal to increase production.

Note: Brent reached a four-year high above $80 a barrel in May, but has fallen steadily in recent weeks as Saudi Arabia has signalled it intends to raise production to stabilize prices.

OPEC is holding its biannual two-day meeting in Vienna starting tomorrow and is widely expected to agree to pump more, possibly supported by some other producers outside OPEC, including Russia. Iran had been expected to oppose any rise in crude output, but it has now indicated it may support a small increase.

Currently, market expectations are looking for an aggregate increase in production for OPEC of between 500k to 1M bpd. 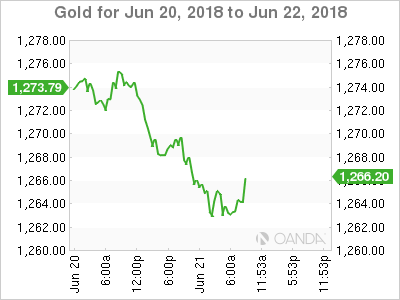 Earlier this morning, there were no surprises by the Swiss National Bank (SNB) who remains constrained by the actions of the ECB. The Swiss policy-makers kept their key policy rate in ‘deeply negative territory’ despite signs of healthy economic activity and slowly rising inflation.

It left its deposit rate at 0.75% as widely expected, where it has been for the past three years. In the adjoining statement, the central bank said the CHF ($0.9972) is “highly valued” and that it was willing to intervene in currency markets, if necessary, should the franc strengthen too much.

The situation in currency markets “remains fragile,” the SNB said, “and the negative interest rate and our willingness to intervene in the foreign exchange market as necessary therefore remain essential.”

Note: The Fed raised rates in March and June, and at it’s meeting last week, officials penciled in two more increases for the remainder of 2018, or a total four for the year. Their forecasts at the December and March meetings were for three increases in 2018.

Nevertheless, global trade conflicts could hinder the Fed from meeting its goals – Fed-funds futures indicate that the odds the Fed will raise interest rates four or more times this year are at 48%, down from 55% Monday. 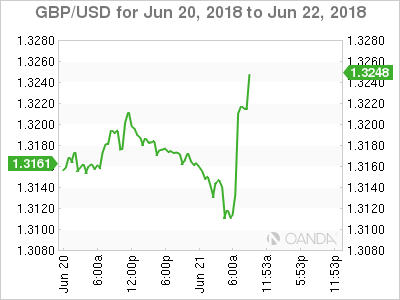 Sterling (£1.3116) traded lower ahead of this morning’s Bank of England monetary policy decision. It is largely expected the central bank will keep interest rates unchanged this month, with focus on whether it gives any hint on the timing of any rate rise in the foreseeable future. The fixed income market is forecasting a 50% chance of an increase in August.

The (€1.1525) is probing the lower end of its overnight range after reports circulated that Italy has appointed a Euro-sceptic to head its Senate Finance Committee. Italian bond yields have also backed up.

(¥110.40) remains in the middle of its current range supported by comments yesterday by U.S. Secretary of Commerce Ross who stated that he did not think the Chinese want a trade war any more than U.S. did. 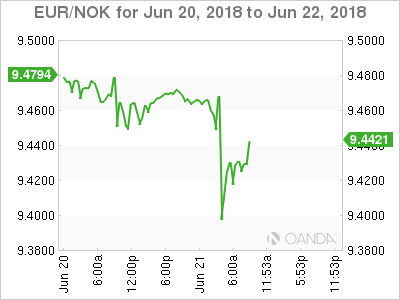 U.K. data this morning showed that U.K. government borrowing declined on the year in May as higher taxes offset a small rise in spending.

The ONS said borrowing in May was £5B compared with £7B a year earlier. The office also stated that borrowing for the fiscal year to the end of March was the lowest in 11 years, at a revised £39.5B.

Note: The U.K. government has been running a small surplus on day-to-day spending, which ex-investment.

Earlier this week, Prime Minister Theresa May said her government intends to increase borrowing and raise taxes to help finance a spending boost for the NHS. 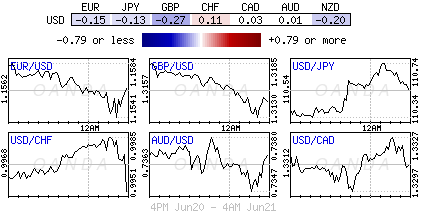