Global equities remain on the back foot as investors continue to come to terms with the U.S. White House’s strategy towards Chinese investments. After some confusion, the Trump administration has re-established its hardline stance on trade.

The U.S. dollar has again found traction against its G10 peers, while EM currency pairs made a rough go of it in the overnight session.

U.S. Treasuries have edged lower for their first drop in more than a week, while China’s yuan fluctuated within a tighter range after its longest run of losses in years.

Note: Allowing the currency to fall is not only a sign that the PBoC is pursuing an easier policy stance but an admission of economic vulnerability.

In commodities, handed back some gains after yesterday hitting the highest in more than three years.

On tap: The European economic summit begins today, while U.S. personal spending is expected to have increased for a third consecutive month tomorrow. On Saturday, China manufacturing and non-manufacturing PMI are due.

Japan’s closed little changed, but trades atop of its one-month low overnight, taking direction from the weakness stateside as a Sino-U.S. trade row hurts investor risk appetite. The Nikkei eased 0.1%, its weakest close this month. Meanwhile, the broader dropped 0.3%, the lowest closing level since mid-April.

Down-under, stocks faded late and left the with a fourth consecutive slight decline. It fell 0.01% overnight, falling a cumulative 0.6% during this down streak. Weighing overnight were the financial, industrial and telecom sectors. In South Korea, the was down 1.19%.

In Hong Kong, stocks slid to a new seven-month low overnight, as a sharp fall in the yuan added to worries about China’s economic growth amid escalating U.S.-China trade tensions. The fell 1.8%, while the China Enterprises Index lost 2.2%.

In Europe, regional bourses are under pressure ahead of the U.S. open. Consumer discretionary leads performers, while materials are underperforming.

U.S. oil prices steadied this morning, pulling back from their four-years highs, but supply remains tight with investors concerned by the prospect of a big fall in crude exports from Iran due to U.S. sanctions.

The U.S. this week demanded that all countries halt imports of Iranian oil from November, a hardline position the Trump administration hopes will cut off funding to Iran.

The move follows a decision by OPEC last week to increase production to try to moderate oil prices that have rallied more than 40% over the last year.

Note: Oil prices have rallied for much of this year on tightening market conditions due to record demand and voluntary supply cuts led by the Middle East dominated OPEC producer cartel. Unplanned supply disruptions from Canada to Libya and Venezuela have added to those cuts.

Gold prices hit their lowest in more than six months earlier this morning as the U.S. dollar held near its one-year highs amid mounting Sino-U.S. trade friction. is down 0.2% an ounce. 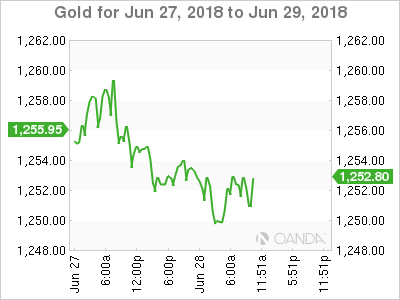 Down-under yesterday, the Reserve Bank of New Zealand (RBNZ) left its Official Cash Rate unchanged at 1.75% (as expected). Policy-makers reiterated their view that they “expected to keep rate at this expansionary level for a considerable period of time.” Monetary policy to be supportive for some time to come as CPI remains below target. 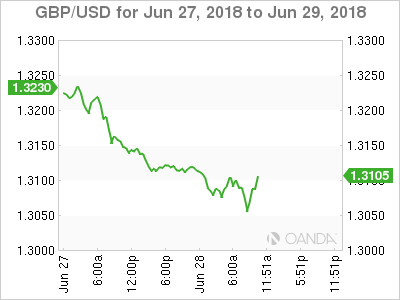 The U.S. dollar continues to rise this morning, reaching a one-week high against the EUR, taking to a low of $1.1527, while emerging market currencies come under more selling pressure. Extracts of June inflation data for Germany and Spain showed CPI just above the ECB target level for the second consecutive month.

(£1.3100) remains within striking distance of its seven-month lows as E.U leaders began a 2-day summit with Brexit clarity as one of the main topics

is up by 0.9% at $13.98, though the rand is also hit by domestic politics, with USD/ZAR having hit a seven-month high earlier.

Eurozone businesses remained upbeat about their prospects in June, even as new tariffs were imposed on trade between the E.U. and the U.S.

The EC indicated that the measures of confidence among manufacturers and service providers was unchanged last month, while a drop in consumer sentiment led to a decline in its Economic Sentiment Indicator – an aggregate measure of consumer and business confidence – to 112.3 from 112.5 in May.

The ECB should be happy after expressing concerns that the threat of greater protectionism could make businesses more cautious in both their investment and hiring plans.

It also suggests that a period of slowing growth may be coming to an end.

The ECB’s economists earlier this month cut their growth forecast for this year in response to a weak German Q1, but policy-makers nevertheless said they expect to end QE in December. 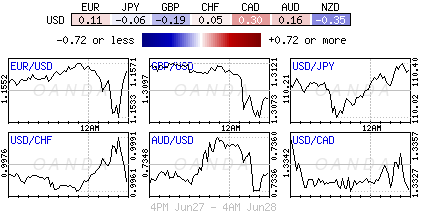