Despite global equities extending gains overnight on growing investor confidence in global growth, the markets attentions is turning towards the G7 conference that begins tomorrow in Quebec.

Expect this summit to be an intensive affair amidst heightened trade tensions between the U.S. and some of its closest allies now that they indicated that they would retaliate against President Donald Trump’s decision to impose duties on steel and aluminum imports from the E.U., Canada and Mexico.

Nevertheless, risk continues to dominate proceedings for now. The EUR remains well supported, advancing for a fourth consecutive session amid talk of an end to the ECB quantitative easing program.

U.S. Treasury yields are holding below the psychological barrier of 3%, and U.S. technology shares, drivers of previous rallies, notch up further records.

Elsewhere, has pared some of yesterday’s losses after U.S. inventory reports reported a surprise increase in domestic crude stockpiles.

In Japan, the share average rose to a two-week high overnight to stay above a key technical level as it tracked yesterday’s Wall Street gains. The Nikkei gained 0.8%, while the broader advanced 0.6%.

Down-under, shares also edged higher overnight, led by material stocks and banks. But the gains were capped by Australia’s biggest wealth manager AMP closing at its worst level in more than nine years on the back of a fourth class action lawsuit. The advanced 0.5%. In South Korea, the Kospi edged 0.6% higher.

In Hong Kong, stocks have rallied on Thursday encouraged by signs of progress in the Sino-U.S. trade talks, easing fears of a trade war. The rose 0.8%, while the China Enterprises Index gained 1.0%.

In China, stocks slipped as investors booked profits on consumer and health-care firms after recent gains. The blue-chip closed 0.2% down, while the also lost 0.2%.

In Europe, regional bourses trade higher, following on from Wall Street’s lead yesterday. The has faded a tad after an earlier technical glitch meant a delayed opening. 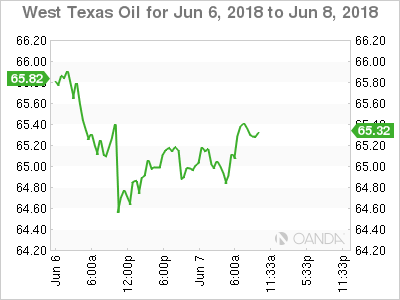 Oil prices are a tad firmer on the back of plunging exports by OPEC-member Venezuela, although another surge in U.S. production still caps advances.

OPEC member Venezuela continues to struggle to meet its supply obligations, with dozens of tankers waiting to take on its oil. The backlog is so severe that state-owned PDVSA has told some customers it may declare force majeure, allowing it to temporarily halt contracts, if they do not accept new delivery terms.

Note: OPEC and Russia are due to meet in Vienna on June 22 to discuss production policy. Iraq said on Wednesday that a production increase was not on the table as the market was stable and prices good.

Note: Surging U.S. production has helped widen WTI’s discount to Brent to more than $10 per barrel.

Ahead of the U.S. open, gold prices have rallied a tad higher on the back of a weaker U.S. dollar as the market seeks directional cues from this week-ends G7 summit and next weeks key central banks and the U.S.-North Korea summit. is up 0.1% at $1,297.46 per ounce, while U.S. for August delivery is unchanged at $1,301.50 per ounce. 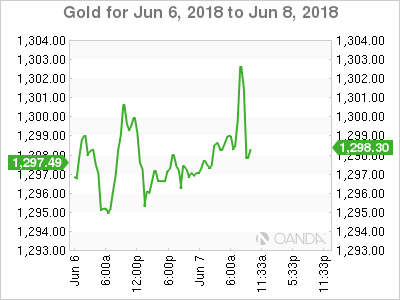 U.S. government bonds prices continue to weaken, but still trade below the psychological 3% handle, as a fresh wave of selling has hit European debt.

This week, Euro yields have drifted higher, under pressure after comments from an ECB official on Wednesday, which the market has interpreted as being ‘hawkish.’

Investors should expect bond movement to pick up more next week as the U.S. Treasury Department will be holding a series of auctions, including sales of 10- and 30-year debt, and the Fed will conclude its next monetary policy meeting.

In Canada, yesterday’s strong April trade report is consistent with expectations that the Bank of Canada could move its key interest rate higher at its next policy announcement in July. Yesterday’s data showed that Canada’s exports rose to their highest level on record and imports fell, resulting in a smaller overall trade deficit than expected.

Note: The positive numbers come during a time of heightened trade uncertainty, after the U.S.-imposed tariffs on steel and aluminum from Canada and amid signs that NAFTA talks have stalled. 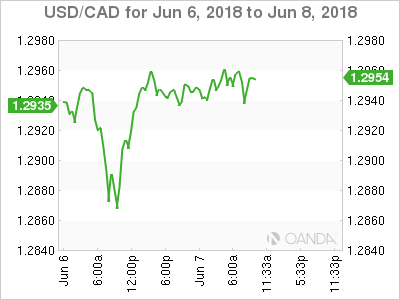 The USD is a tad softer against the major pairs, with heightened trade tension ahead of tomorrow’s two-day G7 summit in Canada. Market consensus seems to believe that there is no chance that the U.S. and other G7 members could reach common ground. Expect it to be an intensive affair.

(€1.1821) continues to find traction to move higher as the market unwinds a number of ‘bearish’ ECB bets. The consensus believes that the ECB will likely discuss QE quantitative easing at next week’s meeting (June 14) and could hint when investors should expect its end.

The (¥109.91) has moved back below the psychological ¥110 level with dealers citing some uncertainty on trade issues ahead of the G7 leader summit.

Note: Techies believe that the pair has failed to overcome its 200 DMA and the 61.8% retracement level of its previous decline and could pave the way for a test lower towards ¥108. 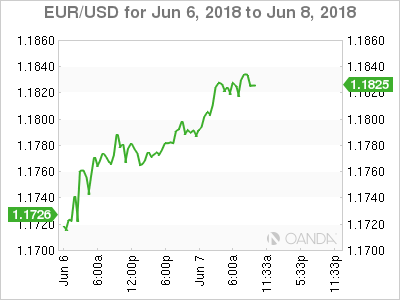 Data this morning from Europe showed that German manufacturing orders dropped sharply in April, which suggests that their economic slowdown is stretching into Q2.

Demand for manufacturing goods fell for the fourth consecutive month, with total orders down 2.5% compared with March. The market was expecting a 0.6% gain.

Dipping data would suggest that rising trade tensions could be discouraging companies’ for new investments.

Digging deeper, Germany’s Economic Ministry noted that demand for aircraft, railway vehicles and vessels was particularly weak, as orders in this volatile category slumped 35.9% from the month before. Domestic orders for German manufacturing goods fell 4.8% m/m, while orders from the rest of the eurozone dropped almost 10%.

Demand from customers outside the eurozone remained strong, however, as orders increased 5.4% and that the order backlog was still “very high” in April y/y. 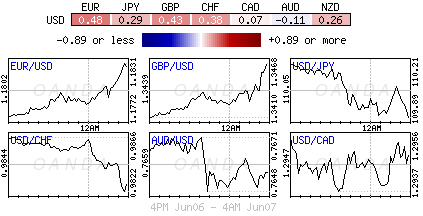