Thursday, May 24: Five Things Markets Are Talking About

Note: Italian President Mattarella has given PM mandate to Giuseppe Conte to try and form a government.

The yield on have stabilized around 3%, while the euro’s ‘single unit’ has found some traction after yesterday’s release of the FOMC minutes, which indicated some policy-makers saw that the Fed funds rate could reach its neutral level before too long. However, U.S. officials also saw trade and fiscal policies as ‘sources of uncertainty.’

Turkey’s lira ($4.6671) has resumed its slump as the market continues to weigh yesterday’s intra-meeting rate hike was not enough to stem losses, while elsewhere, safe-haven assets, including gold and Japan’s yen, continue to climb, as prices slips.

In Japan, the fell to more than two-week lows overnight as automakers slumped after the Trump administration launched a national security investigation into car and truck imports that could lead to new U.S, tariffs. The Nikkei ended 1.1% lower, while the broader fell 1.2%.

Note: The Nikkei volatility index soared to 18.29, the highest level since mid-April.

Down-under, stocks snapped a five-day losing streak on Thursday, aided by gains for gambling equipment maker Aristocrat Leisure that helped outweigh a continued fall for financial stocks. The was up 0.1%. In South Korea, the slid 0.24% on automakers.

In Hong Kong, stocks ended higher, helped by services and energy companies, though gains were capped amid renewed concerns over Sino-U.S. trade tensions. At close of trade, the rose +0.3%, while the gained 0.5%.

In China, stocks extended losses, as caution prevailed amid renewed concerns over China-U.S. trade tensions. The blue-chip index closed down 0.7%, while the ended 0.5% lower.

In Europe, regional bourses have opened a tad higher, with one exception thus far, the . It’s no surprise that automotive stocks again are in focus, this time negative following U.S. President Donald Trump considering tariffs. An appointment of PM in Italy is lending some support in stocks. 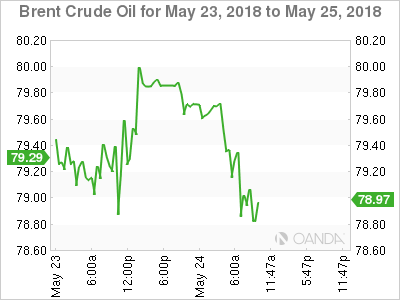 Oil trades under pressure, driven lower by the prospect of the first increase in OPEC output in two years in the face of concern over supply from both Venezuela and Iran, while a surprise rise in U.S. crude inventories raised doubt over seasonal demand.

Currently, the market chatter about a possible OPEC supply increases after the June meeting has put a brake on oil prices for the time being. The $80 handle remains a massive psychological hurdle to overcome.

Note: OPEC may decide next month to increase oil output to make up for reduced supply from Iran and Venezuela and in response to concerns from Washington over a rally in oil prices. 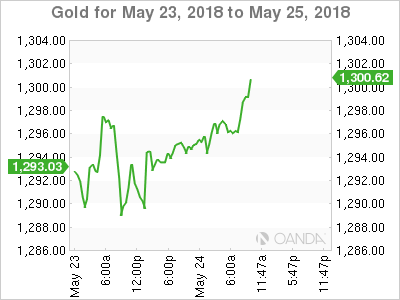 Italy continues to take center stage in the sovereign bond market as dealers focus shifts to the implementation of the coalition’s ambitious agenda and its potential ministers. Will the incoming government sully Italy’s relations with E.U.?

Note: Italy’s government debt remains heavily dependent on support from the ECB’s bond purchases, and the country’s wider financial system is more closely linked to government debt markets than in much of Europe.

For German Bunds, the safety bid continues to gather pace as the Italian BTP sell-off spills over into the core market. Germany’s 10-year Bund yield has decreased 3 bps to 0.53%. The gap between Italy and Germany’s government bond yields has climbed to 192 bps, the highest in nearly a year – the spread has increased more quickly than at any time in the last five years. 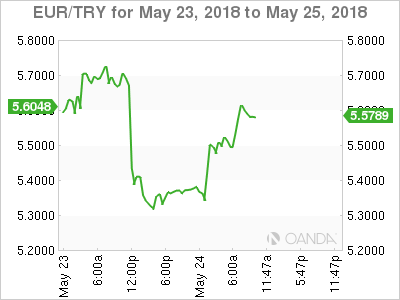 Trade war talks are back and the dollar is under pressure. Reports that the U.S. commerce department has opened up “a section 232 investigation into the imports of cars to determine their effects on America’s national security” is ringing some alarm bells given what happened when the U.S. imposed steel and aluminum tariffs in March. Many view this proactive move as a pretty big escalation in the trade war narrative. is up 0.2% at €1.1732, is down by 0.5% at ¥109.60, while is down 0.2% at $0.9935.

Yesterday’s sizable emergency interest rate hike by Turkey’s central bank temporarily took some pressure off the lira in the near term and goes some way’s to improve confidence in the central bank’s ability to act. However, the pressure on the TRY is expected to remain high until the elections on June 24. The lira has resumed its falls today after gaining sharply late Wednesday, with last up 2.6% at $4.6926.

Note: Fixed income dealers are pricing in another rate hike at the monetary policy meeting on 7 June, if not earlier, should the lira continue to remain under pressure. 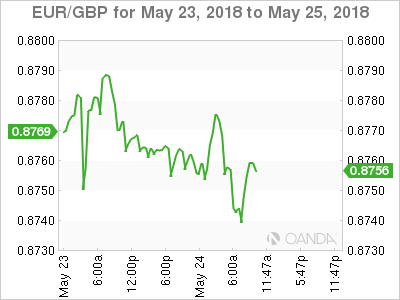 Data this morning showed that U.K. retail sales rebounded in April, recovering from a spell of bad weather in the previous month.

According to the Office for National Statistics, U.K. retail sales climbed 1.6% in April, with all sectors apart from department stores picking up from subdued March levels. Gas sales also picked up after the poor March weather affected travel.

Note: The headline print beat market expectations of an on-the-month rise of 0.8%.

Today’s headline print marks a bright spot among Q2 data that has so far been mixed. CPI data released yesterday revealed the slowest growth in more than 12-months.

Note: The U.K. economy is expected to lag behind its peers this year as uncertainty over the terms of its future relationship with the E.U weighs on activity and investment. 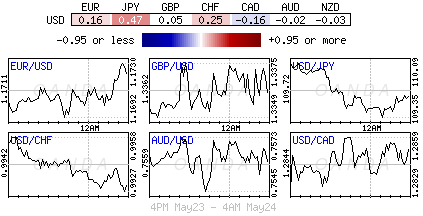