Thursday, May 31: Five Things Markets Are Talking About

Global equities are currently receiving some investor appreciation, rebounding from a two-month trough along with the EUR as the political turmoil in Italy that shook financial markets this week shows signs of easing. The ‘big’ dollar has edged lower, while Italian bond yields have declined again.

Meanwhile in Madrid, parliament is set to vote Friday, June 1, on whether to oust Spanish PM Mariano Rajoy and replace his center-right government with one led by the center-left Socialist Party after a Spanish court ruled that Rajoy’s Popular Party financially benefited from an illegal kickback scheme.

Stateside, a senior North Korean official is in New York this week to discuss the upcoming summit, proof that the latest indication that an ‘on-again-off-again’ meeting between U.S. President Donald Trump and North Korean leader Kim Jong-Un may go ahead on June 12 in Singapore.

Amid all this political and trade turbulence, the next focus for investors is tomorrow’s non-farm payroll (NFP) report (08:30 a.m. EDT), the last one before the Fed meets next month, when it’s expected to hike interest rates.

In Japan, the share average overnight bounced back from a six-week low as worries over Italy’s political crisis receded. The Nikkei rose 0.83%, while the broader rallied 0.65%.

Down-under, shares rebounded, led by materials stocks to close higher on Thursday, but health stocks were under pressure, hit by Trump’s talk of “voluntary massive drops” in drug prices. The rose 0.5%. In South Korea, the added 0.5%.

In Hong Kong, stocks rallied, aided by strong China manufacturing data. The rose 1.4%, while the gained 1.8%.

Note: Data overnight showed that China’s manufacturing sector grew at the fastest pace in eight months in May (51.9 vs. 51.4e), beating expectations and easing concerns about an economic slowdown even as risks from trade tensions with the U.S. and a crackdown on debt point to pressures.

In China, stronger data supported stocks. The blue-chip index rose 2.2%, while the rose 1.8%.

In Europe, regional indices trade mostly higher led by the Italian , with developments on the Italian political front continuing to be in focus. 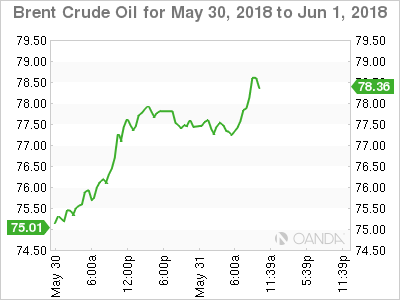 Oil prices have eased slightly overnight following a rally yesterday, as investors eyed a surprise increase in U.S. inventories and looked to a possible rise in output when OPEC and other producers meet on June 22.

Note: Global inventories have been broadly falling, but U.S. crude stockpiles again rallied 1 million barrels in the week to May 25 to 434.9 million barrels.

Expect the market to take its cue from today’s EIA report (10:00 am EDT) – a day later than usual due to a U.S. public holiday on Monday. 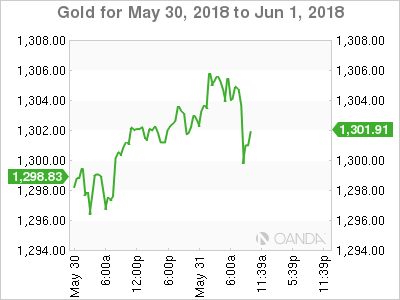 Despite holding their overnight lending rate steady at 1.25%, yesterday’s Bank of Canada (BoC) rate announcement sent strong signals that another rate increase is imminent. The BoC sounded upbeat and tweaked some of the language it used to describe its approach to rate rises. While the BoC had earlier said it would remain “cautious” about future rate changes, that word did not appear in yesterday’s statement. The bank also dropped the words “over time” from a sentence saying higher rates would be warranted, which could suggest that Canadian policy-makers are on course for a move at the next meeting. 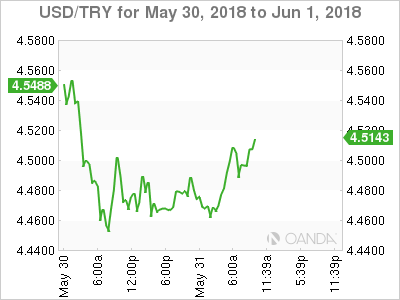 The continued improvement in risk sentiment is weighing upon the ‘mighty’ dollar; the ‘bears’ are out in force, the more aggressive selling at market, while the weaker is still looking for upticks to participate.

The (€1.1700) continues its rebound from its recent 10-month low print earlier this week (€1.1506). In the Euro session, some investors have decided to book some profit on their EUR positions with Italian political uncertainties looming in the background and after May’s eurozone inflation data came in stronger than expected at 1.9% y/y vs. a forecasted 1.6% rise.

Note: A strong inflation would have otherwise been positive for the common currency if it weren’t for Italy, as the ECB would have likely been more willing to show signs of soon exiting their QE program.

In EM, is trading below $4.50 – a key psychological level. Does this imply that last week’s CBRT interest rate hike is a success?

The market’s confidence in a sufficiently restrictive monetary policy is crucial for the currency’s recovery, and the CBRT must prove this at its meeting on June 7.

Dollar ‘bulls’ will forgot monetary policy, the key to the lira’s direction will depend on Turkey’s presidential election – what will monetary policy be like after? President Erdogan and his strange monetary policy ideas continue to be the biggest risk factor for the lira. USD/TRY is last up 0.3% at $4.49. 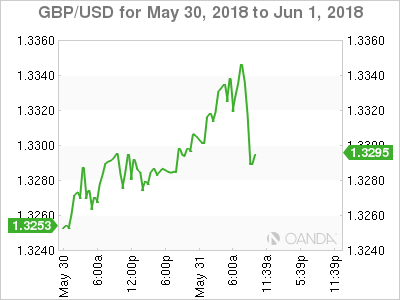 Data this morning shows that the amount that U.K. citizens borrowed strongly rebounded last month, after dipping in March.

The amount that U.K. consumers borrowed in April jumped to £1.8B after falling to £400M in March, which was the lowest in more than five years. The increase was driven by both credit-card spending and loan uptakes.

Note: The stronger report may strengthen the Bank of England’s (BoE) case for raising its key interest rate sooner rather than later – market consensus was expecting the BoE to hike this month. That sentiment, has not disappeared, its just shifted to August, assuming upcoming data remains strong.

Digging deeper, mortgage lending edged lower on the month to £3.9B from £4.0B in March, but remained above the average of the past year.

Other data shows that European inflation continues to improve. France, Italy and Eurozone all improved from month-ago levels and above market expectations. 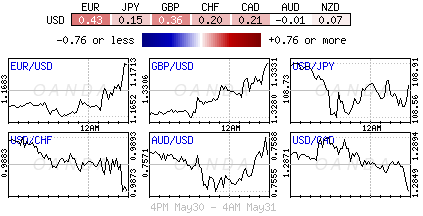