Earlier this morning U.K. Brexit Minister Dominic Raab resigned, a day after Prime Minister Theresa May’s cabinet agreed the wording of a post-Brexit trade deal between the U.K. and the E.U.

Raab said he could not support, in good conscience, his former leader’s deal. Sterling was immediately hit, falling -1.55% to £1.2785. The market was expecting some resignations, but not such a high-profile individual to kick things off.

May can now expect more resignations, which would lead to a vote of no confidence and throws the future course of Brexit into uncertainty.

Future scenarios range from a calm divorce to rejection of May’s deal, potentially ending her leadership and leaving the bloc with no agreement, or another referendum.

Global stocks have mostly ‘stabilized’ after a recent selloff, even as ongoing Brexit developments drove sharp swings in the European markets.

In Japan, the fell on Thursday, with banking stocks sliding after disappointing earnings forecasts and losses in U.S. financial shares Wednesday. The Nikkei share average ended 0.2% lower, while the broader was down 0.1%.

Ex-Japan, stocks were broadly higher on reports that China made an opening bid to the U.S. on trade, as well as upbeat results in the technology sector. Shares of Tencent Holdings rallied 5.8% after reporting a better-than-expected 30% rise in profits. Hong Kong’s rallied 1.75%, the rose 1.4% and South Korea’s climbed 1%.

Down-under, a late-afternoon rebound in stocks pushed the benchmark back into positive territory at the day’s end. The ASX S&P 200-rallied 0.06%, supported mostly by an overnight uptick in prices.

In Europe, regional bourses trade mixed, with the outperforming on the back of a steep drop in the pound (£1.2790, -1.7%) after initial strength following yesterday’s cabinet agreement on the wording of a post-Brexit deal. 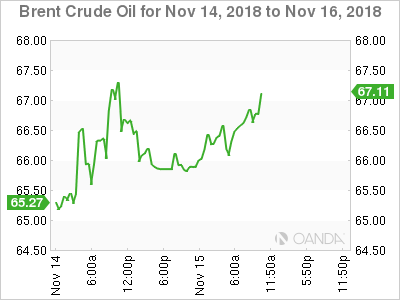 Note: Brent soared to a four-year high of $86.74 in early October as the market waited for U.S. sanctions on Iran, but prices have plummeted 25% in the last four weeks.

OPEC warned earlier this week that a supply glut could emerge in 2019 as the world economy slows and rivals increase production more quickly than expected.

Led by top exporter Saudi Arabia, OPEC has been making more public statements of late that they would start withholding crude next year to tighten supply and prop up prices.

In its monthly report Wednesday, IEA left its forecast for global demand growth for 2018 and 2019 unchanged from last month at 1.3 million (NYSE:) and 1.4 million bpd, respectively, but cut its forecast for non-OECD demand growth. For H1 2019, based on its outlook for non-OPEC production and global demand, and assuming flat OPEC production, the IEA said the “implied stock build is 2M bpd.”

Note: Both OPEC and Russia are under pressure to reduce current production levels; this decision could be taken at the next OPEC meeting on Dec. 6. 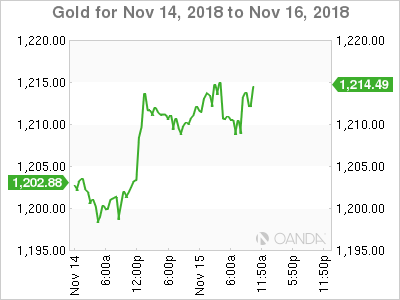 Borrowing costs in Spain, Italy and Portugal are backing up as the market stays away from riskier assets after this morning’s developments in the U.K.

Note: Euro leaders are expected to meet on Nov. 25 to endorse Britain’s divorce deal, but will there be one to ratify?

Elsewhere, the spread of Italy’s 10-year BTP’s over Germany’s Bunds increased 4 bps to 3.1352% to the biggest premium in more than three weeks. 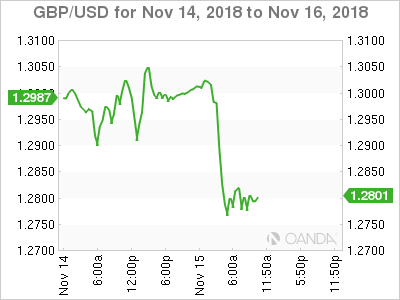 Uncertainty over whether May will be able to deliver a Brexit deal after two cabinet members resigned this morning and talks of increased support for a no-confidence vote has encouraged the market to sell the pound. has fallen 1.55% to £1.2785, while has rallied 1.40% to €0.8828.

In case there is a no-deal Brexit, the pound is expected to plunge dramatically, so much so, that the pound ‘bears’ are speculating that that it could take EUR/GBP to €1.00 – €1.10 region. It would mean that the U.K. would end up with a trade relationship with the E.U. based on WTO regulations. 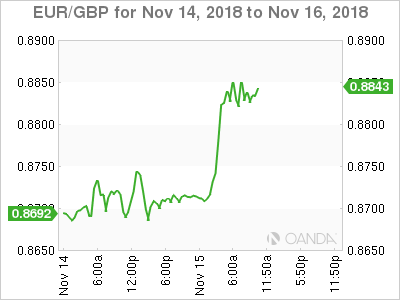 Data from the ONS this morning showed that U.K. retail sales declined in October for the second consecutive month. This would suggest that the U.K. consumer is “tightening their belts.”

Prior to today’s surprised Brexit resignations, both the BoE and IMF had expected the U.K. economy to grow modestly next year as it begins restructuring its economic ties with the E.U. after its withdrawal from the bloc in March. 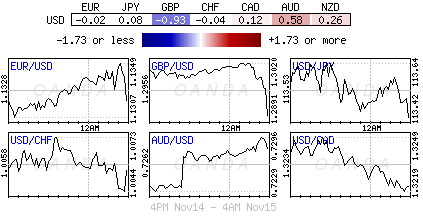