In the past 2 weeks, we’ve seen a dramatic recovery in the . The single currency appreciated more than 4 cents in a move that took the pair from its 1-year low of 1.13 to a 3-week high of 1.1733. The recovery was driven by the decline in the , improvement in risk appetite, softer U.S. economic reports, stronger German data and short covering. However now that EUR/USD breached 1.17 and came within 17 pips of our 1.1750 target, it may be time to start looking at selling euros.

On a fundamental basis, the record-breaking moves in U.S. stocks will boost business and consumer confidence. In fact according to the Conference Board, in August hit its strongest level in 17 years. This positive attitude should translate into more spending, especially after the confidence report showed more respondents preparing to make big-ticket purchases (homes, cars, major appliances) over the next 6 months. With more spending comes more growth and healthier U.S. data. German data has also been decent as shown by Monday’s report but the real problem for the euro is Italy. Italian hit 4-year highs Tuesday reflecting renewed concerns about the country’s budget. Right now investors are looking at it as a localized problem as they’ve sold Italian bonds but not the euro. On Monday, Prime Minister Luigi Di Maio said the government could breach the EU’s 3% deficit target next year and the mere risk of that could prompt a negative outlook or downgrade by the 3 main rating agencies over the next few weeks. The euro may not be able to escape falling if Italy’s credit rating is lowered. 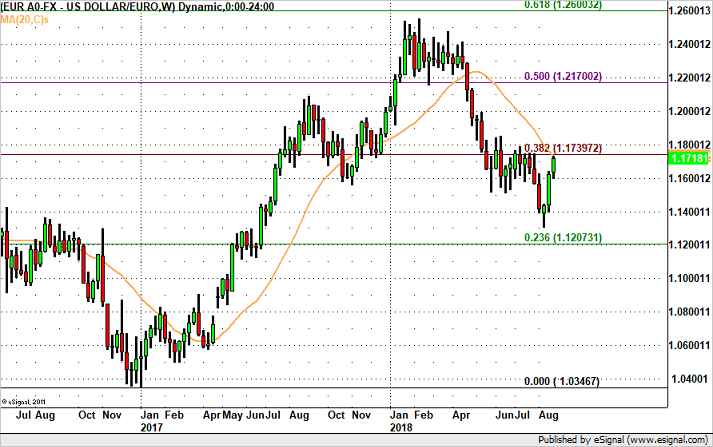 While the ended the NY session lower against some currencies and higher versus others, there’s no question that the sell-off is beginning to lose momentum. beat expectations but higher interest rates caused to rise less than anticipated and the stronger dollar contributed to the wider . Revisions to report is due for release on Wednesday along with but the dollar should take its cue from stocks, risk appetite and ultimately Canadian-US trade headlines. has been hovering above 111 since the beginning of the week. The only currency that has consistently performed worse than the dollar is the Japanese yen and the only reason for that is the recovery in risk. If USD/JPY drops below 110.80, the next stop should be 110.

Canadian Foreign Minister Freeland is in Washington right now for high-stakes trade talks with the U.S. Judging from comments by Treasury Secretary Mnuchin, the U.S. wants a deal with Canada, especially after the victory with Mexico. President Trump and Prime Minister Trudeau also had a “constructive conversation” on Monday in advance of these talks and the fact that they are moving forward suggests that there’s a strong will by both sides to reach an agreement in the next week or two. traded lower for the third day in a row, breaking 1.29 in the process. The pair closed above the round number as traders were hesitant to take USD/CAD far below that level before there’s any news on the trade front. The ended the day higher as well but the was unable to hold onto its gains.

turned lower Tuesday on the back of the recovery in the . The latest Brexit headlines also suggest that negotiations aren’t going as well as the UK hopes. Prime Minister May said a no-deal Brexit is not the end the world and the UK’s Fox said they made a fair and reasonable offer to the EU. They also said hard Brexit is not off the table. These are not the type of headlines we want to see out of the talks – UK leaders should be touting progress and the nearing of a deal rather than alternative options. As a result, GBP/USD looks like it could revisit 1.28.