As anticipated, most Asia Pacific benchmark stock indexes followed Wall Street and the S&P 500 higher during Tuesday trade. Absence of trade war updates allowed the Nikkei 225 to rise about 1.20% which was its best performance in a single day (after gapping higher) since August 14th. Brexit news and the aftermath of Swedish election results have generally allowed market mood to improve after last week’s decline.

There were notable gains in China, where the Shanghai Composite climbed by 0.30%. Australia’s ASX 200 was led higher by about 0.59% as financials and energy outperformed. One standout was South Korea’s KOSPI which headed lower more than 0.2 percent.

Looking at FX showed that the anti-risk Japanese Yen underperformed against its major counterparts. Meanwhile, the sentiment-linked Australian Dollar headed cautiously higher. The currency was also boosted by rather mixed NAB business confidence data. Markets seemed to be more focused on the improvement in business conditions.

As for emerging markets, Philippine stocks were under pressure. The Philippine Stock Exchange index fell about 1.1 percent. This may have been due to fears ahead of Typhoon Mangkhut which is projected to impact 1.2m hectares of farm. The Philippine Peso also depreciated after local external data showed that the trade deficit widened to -$3.55b as imports grew while exports lagged behind.

Despite the ‘risk on’ dynamic from developed nations, emerging markets are still under pressure after the MSCI Emerging Markets ETF fell about 1 percent on Monday. These nations as well as developed ones re still at risk to the US imposing additional tariffs on China, which could spark further retaliation from the impacted nation. As such, this mostly positive market mood could still reverse course at a moment’s notice.

For the time being, S&P 500 futures are pointing cautiously higher heading into the European trading session, insinuating that the ‘risk on’ trading environment could continue. This would keep weighing on the Japanese Yen. Meanwhile, the Euro could look past German ZEW survey expectations. The proximity of this week’s ECB rate decision could leave traders hesitant to taking on large bets on the data.

If USD/JPY prices continue climbing, we may see the pair break out of its consolidation range from late July. The pair has been stuck above and below the descending trend line from August 2015. Rising out of consolidation would mean pushing above the 23.6% Fibonacci extension at 111.80 which would then expose the July 19th high. Meanwhile, near-term support is the 2015 trend line followed by the August 21st low. 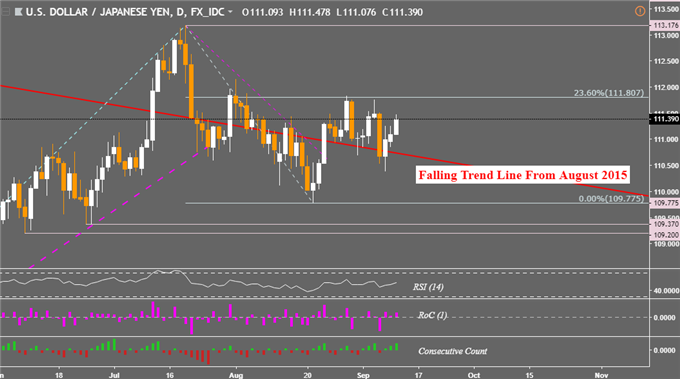