Trade War: Key Investing Theme Of 2018? Here’s How To Benefit

Over the past few months, Donald Trump’s administration has greatly escalated its efforts to reshape the global trade agreements of the past, picking fights with both allies and adversaries across the world in an effort to negotiate more favorable terms for United States of America, one of the biggest markets for exports for the rest of the world.

Up until now, the conflict has been more rhetorical rather than policy-based, focusing on a few isolated industries and a hodgepodge of retaliatory measures.

However, given Donald Trump’s predilection to push every policy idea well past its limit, global investors are becoming increasingly more concerned that the current low-grade skirmish will turn into a full-blown trade war.

Let’s take a look at the political, economic and financial implications of what may well be the defining investing theme of 2018.

Donald Trump was elected on the populist platform of an ‘America First’ rhetoric, upending decades of American foreign policy, which saw the country as a leader of the Western world that supported and nurtured its allies, to one that put its primacy first at the expense of allies and adversaries alike.

One of Trump’s key political points was the reduction in the massive trade deficit with China, which stood at $365bn in 2017. However, as many political analysts have pointed out, Mr. Trump’s go-at-it-alone style that managed to antagonize the USA’s strongest allies and best trading partners, such as the European Union and Canada, has actually strengthened China’s hand rather than isolating it on the global stage, managing to turn the US—rather than China—into an international outcast at the moment.

Furthermore, Trump’s threat to ignore the very institutions of free trade that the US helped to establish—such as the WTO—could create long-standing damage to a system that has been responsible for the greatest economic progress in human history, as measured by world GDP.

So far, the economic impact of a trade war has been minimal. The Trump administration has only implemented 4% tariffs on $50 billion worth of Chinese goods.

However, according to a recent Marketwatch article, economists at Bank of America Merrill Lynch modeled an all-out battle, assuming a global 10% tariff on all goods and services, which is the tariff rate Trump threatened to impose on $200bn worth of Chinese goods.

Running it through FRB/US — the Fed’s macroeconomic model — the scenario isn’t good but doesn’t appear catastrophic. GDP growth would be shaved by as much as 0.4 percentage points in the first year and as much as 0.6 percentage points in the second. Core inflation would rise slightly, as the spike in import prices would be ameliorated by a rising . The Fed would probably slow its pace of interest rates as the trade war continued.

That scenario, however, woefully underestimates any indirect negative fallout from such a move, such as a decline in business optimism, a drop in consumer confidence, and most importantly, a decrease in long-term investment plans that could have significant impacts on long-term growth rates.

Little wonder then that financial markets are becoming increasingly more concerned about the negative implications of the current state of affairs.

Equity, fixed income and currency markets are already beginning to feel the pressure of a trade war; risk aversion trades have increased markedly over the past few weeks despite evidence that growth in G-11 continues to remain steady.

Markets, however, are beginning to price in the prospects of greater economic friction that could raise prices, dampen demand and cool all investment for the foreseeable future. This leaves a variety of instruments vulnerable to a near term sell-off should rhetoric turn to policy and retaliation from all parties involved.

Although the US economy is relatively insular with domestic demand generating approximately 90% of the US GDP, the US equity market is quite a different matter. The is comprised of many multinational corporations and 50% of US company profits come from abroad.

This factor threatens US equities in two ways. First from the negative exchange rates as the strengthening dollar increases cost of goods while decreases revenues from abroad; and secondly from possible retaliatory tariffs from allies and adversaries alike that could radically impact final demand.

The US equity market is already trading near historically high valuations so any decline in profit expectations could quickly slice price by 10% or more.

Technically, the S&P remains near an all-time high, but price has stalled near the 2800 level and appears to be ready to roll over as buying momentum has dried up. The first level of support does not appear until the 2600 level so a quick sell-off could easily take the index to that figure if risk aversion flow accelerates.

Perhaps no currency pair is more vulnerable to risk-off flows than . The pair has already declined 500 pips from its recent multi-year highs of 1.2000, but the correction may just be beginning. EURCHF faces trouble on both fronts as investors flock to the safety of the at any sign of rising global geopolitical tensions, but it is also threatened by developments in Europe where nationalist sentiment threatens to undermine the delicate balance of the European Union.

In Italy, the populist parties are setting the stage to massively increase the fiscal budget, blowing up the country’s already-tenuous finances and possibly giving rise to the prospect of Italy’s exit from the .

Meanwhile in Germany, Angela Merkel is under enormous pressure from her coalition partners to curtail the migrant flows and bow out of a pan-European response to the problem. Although the prospect of a coalition break-up and early election remains slim, the odds have risen sharply over the past two weeks. Should Ms. Merkel be forced to seek re-election, the uncertainty in the financial market will reach a fever pitch as she is viewed by investors worldwide to be the last bastion of hope against the more militaristic, nationalistic and protectionist global environment that could come to pass.

For now, the EURCHF pair is barely holding on to the 1.1500 support level, but should tensions in Germany and Italy escalate this week, that level could quickly give way and send the pair towards 1.1000 figure over the near term horizon.

Typically during times of risk aversion, performs well as a harbor for safety, but the yellow metal has been under pressure lately despite increasingly high tensions over the trade issue. The key headwind for gold has been the Fed. The Fed has remained resolutely hawkish over the past six month signaling to the market that it intends to every quarter, ultimately taking US yields to over the 3% level on the short-term of the curve. The rising yield of US financials assets has made gold longs increasingly difficult to hold as the commodity becomes more and more a negative carry against the dollar.

Still, perhaps the most surprising aspect about gold this year was not how weak the price has been, but rather how well it managed to hold up given the relentless rate hikes by Mr. Powell and company. The yellow metal has basically traded in a very wide $1200-$1400/oz range for the past two years but over that time the commodity has managed to make higher lows every time it’s corrected indicating that buyers may be hidden but remain ready to strike.

While Trade War tensions are not a direct catalyst for gold, the action in the yellow metal could quickly heat up if the fallout from the conflict forces the Fed to change its plan of action. If US economic growth begins to slow as a result of delayed investment or lower final demand, the Fed could go back to a neutral stance, which would likely cause a massive short covering rally in Gold that could take the commodity towards its multi year highs at $1400/oz.

Gold is never really in an investment because it is not a productive asset, but it has been for millennia the ultimate insurance vehicle in times financial stress. Given the fact that all indications point to further escalation of hostilities between US and the rest of the world, gold presents a low risk opportunity to hedge bets. As long the $1200/oz level holds the yellow metal remains a hidden buy in the financial markets. 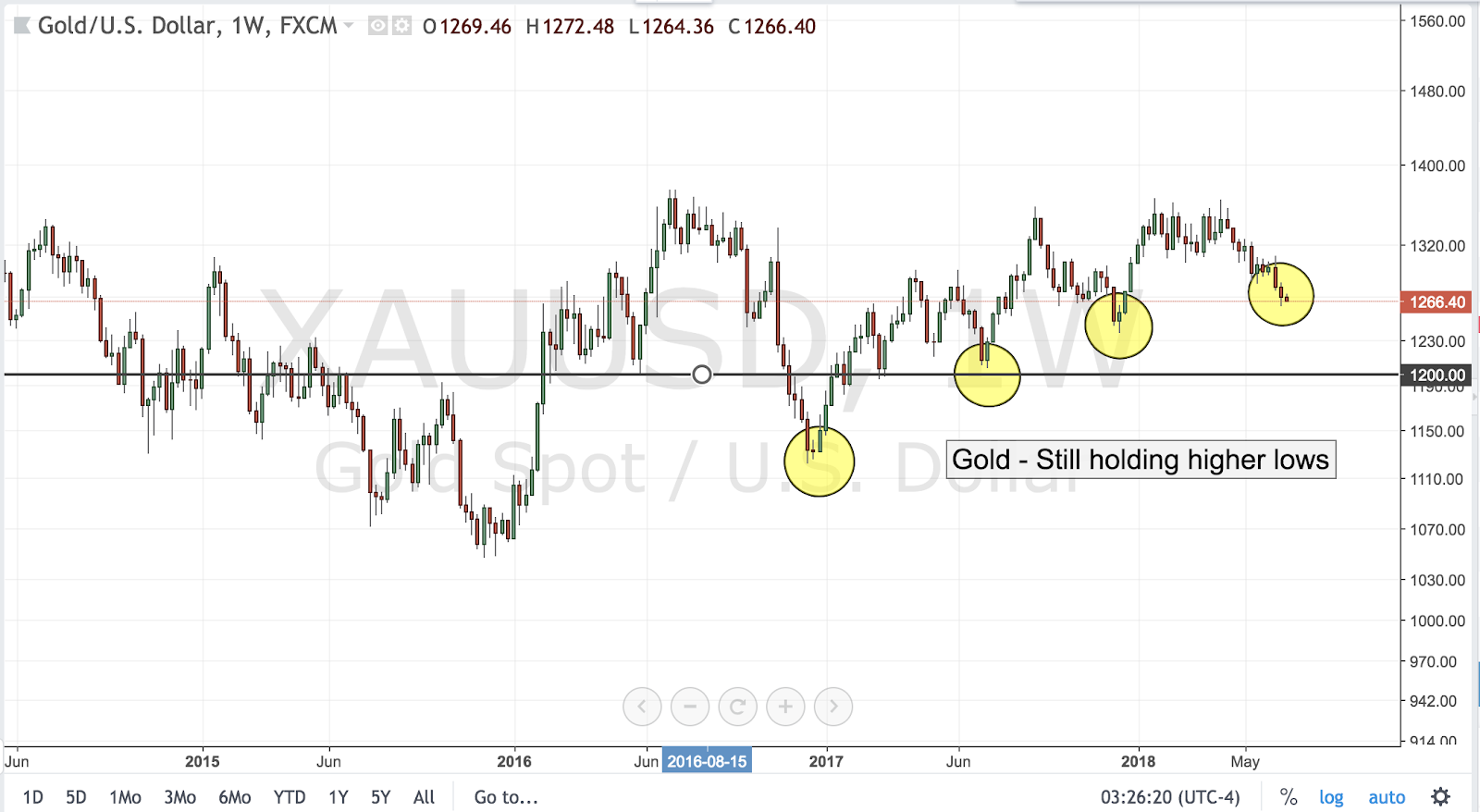