As the confrontation over trade between the United States and China escalates, speculation that the battle is shifting to the currency front is increasing, with China allowing its currency, the renminbi or , to depreciate in compensation for U.S. tariffs. A variation on this theme is that China will start dumping its holdings of U.S. Treasuries in retaliation.

Markets are viewing a rate of 7.0 yuan to one U.S. dollar as the line China must defend if it wants to avoid provoking a U.S. reaction either in the currency markets or on the trade front. 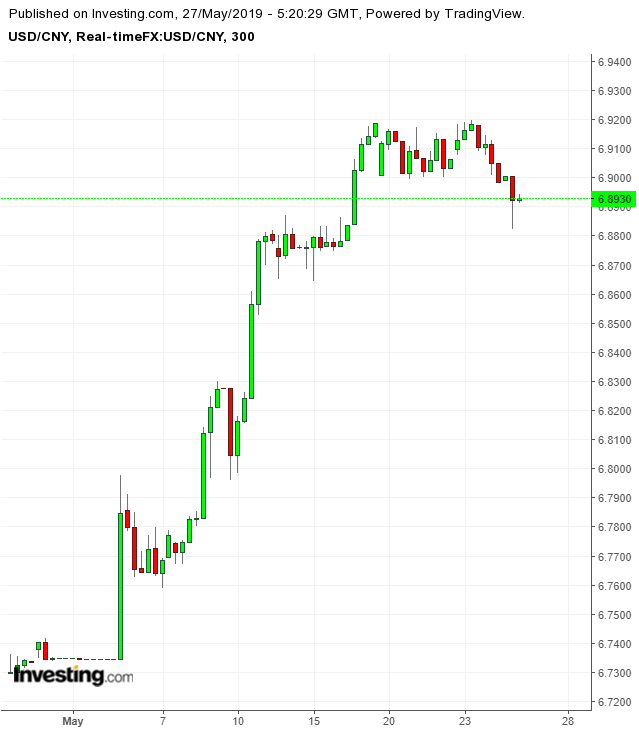 The Chinese currency has been drifting in that direction since President Donald Trump announced new tariffs earlier this month, hovering now just below 6.9, compared to the very stable 6.7-6.75 in the preceding months. Experts have calculated the yuan would have to reach 7.10 to compensate for the new tariffs.

Currency war scares tend to crop up when trade tensions rise or talks stall. This was the case last summer as the yuan began to depreciate amid heightened trade tensions. Chinese leaders at that time hurried to dispel these concerns.

Most analysts believe the Chinese will not intentionally depreciate their currency to score points in a trade war. Not only would it provoke the U.S., it would hasten capital outflow from mainland China and damage efforts to internationalize the yuan.

Likewise, the notion that China would sell off U.S. Treasuries to weaponize the yuan is largely dismissed by Western experts. China’s sale of $20 billion of Treasuries with more than a year maturity in March raised eyebrows, but that hardly makes a dent in China’s $1.1 trillion in currency reserves.

Any significant sale that would affect Treasury prices would hurt China by forcing it to write down the value of remaining reserves. Even if China were to sell, there seem to be plenty of other buyers out there as yields on Treasuries have declined to 2.3 percent from well above 3 percent a few months ago. Ironically, it is those same trade tensions driving investors into the safe haven of U.S. government debt that are pushing down yields.

Trump didn’t hesitate to take the decline in the yuan as intentional and as a sign that China wanted a trade deal. “China will be pumping money into their system and probably reducing interest rates,” the president tweeted after announcing the tariffs, “in order to make up for the business they are, and will be, losing.”

The president would be only too happy if the Fed would cut interest rates as he has been urging and resume its asset purchases to loosen monetary policy and push down exchange rates. The Fed, of course, is not likely to play that game, but once again Trump has set them up as the scapegoat if the U.S. begins “losing” the currency war and allows China to fight tariff costs by depreciating its currency.

Some analysts are asking whether Trump would retaliate by increasing tariffs again or extending them to additional goods if the Chinese did let the yuan crash through the 7.0 threshold. Then the Chinese currency could go to 7.40 they calculate, as the currency war escalates along with the trade war. The Trump administration proposed a rule late last week allowing the U.S. to automatically slap punitive tariffs on countries suspected of manipulating their currency for trade advantage.

The irony is that, barring any action by the Fed, the current policy trajectory makes the dollar the winner in the more traditional sense that it tends to strengthen from the safe-haven effect. This entails some collateral damage in other emerging market currencies, which will be dragged down with the yuan unless they adopt some defensive strategies against the dollar.

Where will it all stop? And who will blink first?