HomenewsAlertsTrade Wars to Save Exhausted USD from Correction Lower

Trade Wars to Save Exhausted USD from Correction Lower

While the Non-Farm Payroll release tends to be a relatively volatile event for major asset classes. The importance of this release has somewhat diminished over the past couple of months given the rhetoric from the Fed that another 2 rate hikes will be on the way this year (September and December). As such, this suggests that the any positive effects of this release on the USD is limited at best, which was also evidenced by the recent stellar ISM report. However, components of the NFP report will of course garner attention, most notably the wage growth figures, which remain somewhat subdued, suggesting that there is still some slack within the economy. Although, a significant uptick in wage growth would be needed to provide a new catalyst for USD strength.

Yesterday saw the end of the consultation period on the imposition of a fresh wave of US tariffs on Chinese goods. The amount is touted to be as much as $200bln worth of Chinese goods. Consequently, headline risk surrounding bearish trade war news is elevated which could provide support in the greenback against emerging market currencies. That said, scope for USD softness is limited on trade war headlines.

Net USD long positioning is a somewhat crowded trade with CFTC data showing net longs at $24.691bln. This suggests that further upside in the USD is likely to be modest at best, however, with speculators recently cutting back on their bullish bets ($250mln reduction), the greenback is at risk of further liquidation. 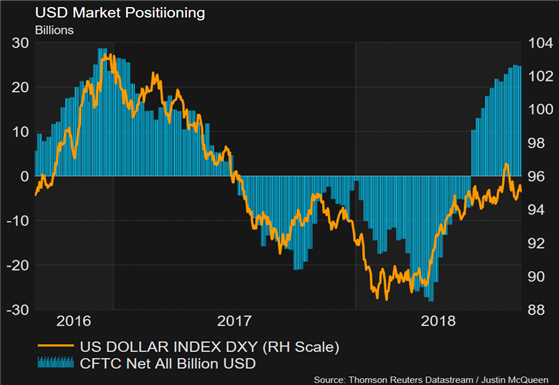 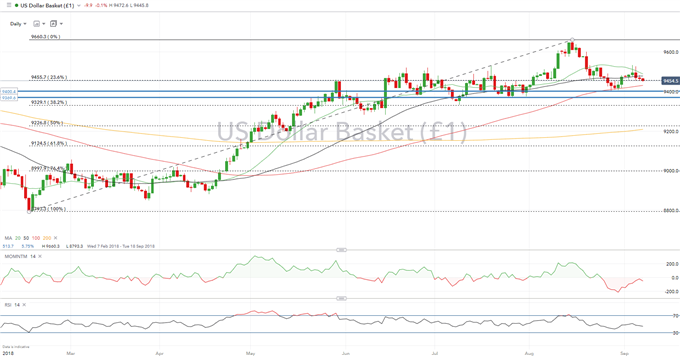 Momentum indicators continue to point towards a negative bias, while RSI indicators have also tilted to the downside. Eyes on a break below the 23.6% Fibonacci retracement of the rise from the 2018 low to 2018 high. A break could see USD extend on losses towards the August 28th low.