HomenewsMarket OverviewTruce – All Is Good, Oil Rallies 5%, U.S. Dollar Down And Yields Higher

Truce – All Is Good, Oil Rallies 5%, U.S. Dollar Down And Yields Higher

Monday, Dec. 3: Five things the markets are talking about

Global equities have rallied overnight, alongside U.S. Treasury yields, while the ‘big’ dollar trades under pressure after the U.S. and China declared a temporary truce in their Sino-U.S. trade war.

No progress was made on key differences regarding intellectual property and forced technology transfers. The U.S. was promised to see China buying more goods to narrow the trade gap, while China received reprieve on increased tariffs for the time being.

Crude oil has rallied on optimism OPEC+ will address a glut in global supply later this week, while the EUR has found some support on news that the Italian government may accept a lower deficit target.

Elsewhere, there is also a slew of updated economic data, including final manufacturing, services and composite PMI’s for last month. Down-under, Australia will deliver Q3 GDP, while on Wednesday Fed chair Jerome Powell is expected to testify on “The Economic Outlook” before Congress’s Joint Economic Committee (tentative).

On tap: U.S financial markets will close on Wednesday (Dec. 5) for a national day of mourning to honour former President George H.W. Bush.

The truce between the world’s two largest economies at the G20 summit in Argentina on the weekend has gone some way in calming invester fears over the state of global growth.

In Japan, the surged to a six-week high overnight after the U.S. and China suspended the imposition of new tariffs and agreed to try to reach a trade deal within three months. The index share average rallied 1.0%, the highest closing level since Oct. 22. The broader rallied 1.3%.

In China, stocks, commodities and the yuan currency surged even as uncertainty remained about the deal. The benchmark index closed 2.6% higher and the blue-chip index rallied 2.8%. Both posted their best daily gains since Nov. 2. 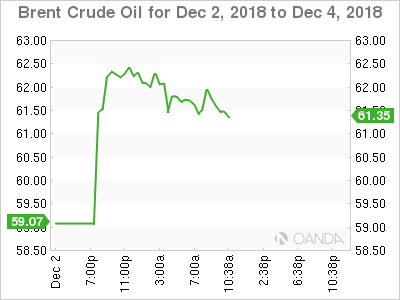 Oil prices jumped by more than 5% after the Sino-U.S. 90-day trade truce, and ahead of this week’s OPEC+ meeting (Dec. 6), where producers are expected to cut supply.

The U.S.-China trade war has weighed heavily on global trade and has generated concerns of an economic slowdown. Despite oil not been included in the list of products facing import tariffs, the market sees the positive sentiment of the truce.

Oil also received support from Canada, where Alberta indicated that it would force producers to cut output by 8.7%, or 325Kbpd, to deal with a pipeline bottleneck that has led to crude building up in storage.

OPEC+ will meet on Dec. 6 to decide output policy. The group, along Russia, is expected to announce cuts aimed at reining in a production surplus.

Note: Qatar indicated this morning that they would leave OPEC in January – their oil production is only around 600K bpd, but it is the world’s biggest exporter of liquefied . 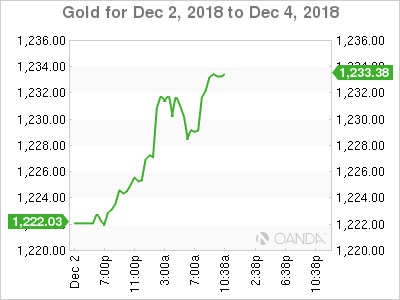 Italy’s borrowing costs fell to their lowest level in two months earlier this morning after a number of reports that Italy is negotiating with the EU to reduce its 2019 target for the budget deficit to 2.0% of GDP.

Also, demand for riskier assets, like Italian BTP’s, was supported by the weekend’s Sino-U.S. trade truce. That in turn dented safe-haven German debt, with 10-year yields pulling away from their three-month print last week.

Ten-year Italian bond yields fell 6 bps to a two-month low at 3.15%. That narrowed the gap over benchmark German Bund yields to around 279 bps — its’ tightest in two months. 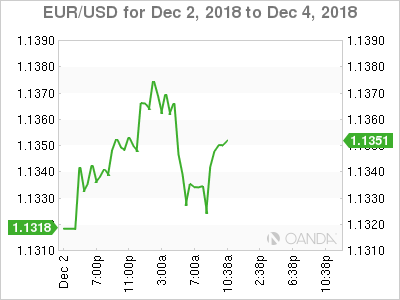 4. For now, U.S. dollar under pressure

The U.S. dollar is under pressure following the breakthrough in trade talks between the world’s two largest economies over the weekend as the market opts to take on more risk.

U.S. dollar ‘bears’ will remain wary of a sustained breakthrough in trade tensions that could encourage the Fed to deliver more monetary tightening next year.

Sterling briefly traded above £1.28 before fading down 0.37% to £1.2731. The balance of risks for the pound remains skewed to the downside in the near-term, as Brexit uncertainty is set to remain elevated.

Note: UK Politicians have signed a letter arguing the government was in contempt of parliament for not publishing the AG Cox’s legal advice pertaining to the Brexit agreement.

The EUR (€1.1350) trades over 0.2% higher as overall risk-on dominates for now, as well as Italian budget deficit target compromise is helping to lift the pair. The Japanese yen has climbed 0.1% to ¥113.45, the strongest in more than a week. 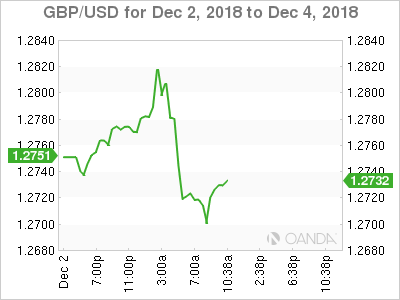 The pound stays atop of its intraday lows despite the UK manufacturing purchasing managers’ survey for November rising to a two-month high of 53.1 from October’s 27-month low of 51.1.

Brexit worries continue to weigh on the currency and with that, economic data takes a backseat in terms of importance.

Presently, the fate of the pound now rests on the UK vote on Brexit next week (Dec. 11) rather than on fundamentals.

IHS Markit stated, “the performance of the sector remained comparatively lacklustre, with the latest PMI reading still among the weakest registered over the past two-and-a-half years.” 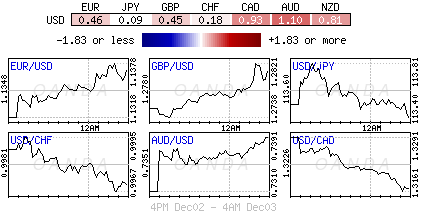