It’s jobs report day in the U.S. and yet, as has been the case for most of the week, attention is firmly on the latest wrangling between the U.S. and China, with Donald Trump proposing another $100 billion in tariffs.

We saw a remarkable rebound early in the session on Wednesday after China unveiled $50 billion of tariffs of their own in retaliation to those announced by the White House earlier in the week. were more than 500 points in the red ahead of the open but it appears some reassuring words from White House economic adviser Larry Kudlow were enough to ease investors’ concerns, triggering a rapid rebound with markets ending the day in positive territory and posting further gains on Thursday. 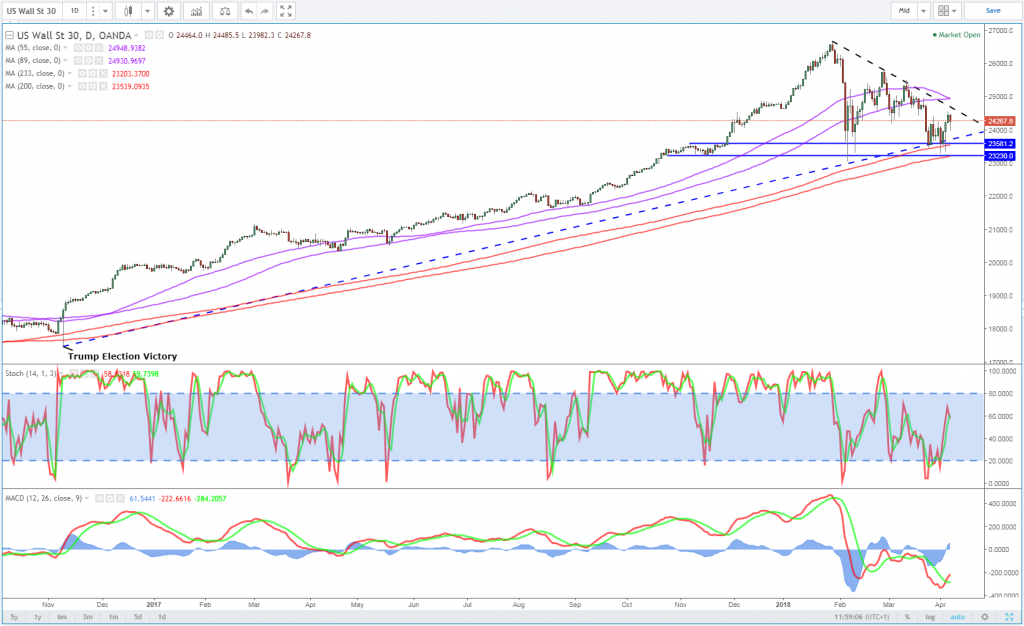 Kudlow reiterated the point that no tariffs will be put in place for at least two months and claimed he believed Beijing will back down. This gave the impression that a trade war is not what Washington is looking for, despite Trump’s previous claim that they are easy to win, and that negotiations will take place to avert one if possible. With neither side giving the impression that they’re willing to back down though, there’s still a very real chance that these could be imposed, along with any others that are announced in the meantime.

The declaration by Trump that he has instructed the U.S. Trade Representative to consider another $100 billion of tariffs under section 301 has once again sent markets lower, although not as much as previous tariff announcements have. Perhaps Kudlow’s comments have indeed reassured investors that those behind the scenes do not have the desire to engage in a trade war as much as Trump does, which is limiting the downside.

With mid-term elections in November not far away, there’s likely to be a lot of nervous Republicans worried about what impact this could have if it’s allowed to escalate further. China is quite clearly targeting big swing states and those whose support Trump relied on to get elected. If these tariffs are imposed, they will feel let down and that will show at the polls, potentially causing critical harm to Republicans in the Senate and the House. It’s no wonder China feels in a position of power given that Trump has quite a clear weakness.

While the tariffs story will likely continue to be the main mover of financial markets, we can’t ignore the data that’s about to be released. The U.S. jobs report is arguably the most important economic report we get each month and offers valuable insight into how the labour market is performing and, more importantly right now, whether wages are growing.

Higher wages typically means higher inflation which, in turn, means more interest rate hikes. So far, the Federal Reserve has been raising interest rates in anticipation of higher inflation but that hasn’t really materialized. Should that continue, they may be convinced to take the foot off the gas a little, while signs of inflationary pressures building could encourage them to push for a fourth hike this year, which they weren’t far from forecasting last month.

There’s a number of reasons the yield on 10-year Treasuries has failed to make the break above 3%, despite coming close on a few occasions recently. One of those reasons, I believe, is the lack of inflation. An upside surprise in average hourly earnings today may not be enough to trigger a move above 3% but it will certainly get people thinking about the possibility that higher inflation is coming, given the recent changes to tax rates, and start a chain of events that triggers a big psychological move.