Friday, Aug. 31: Five things the markets are talking about

The threat of global growth taking a hit from a damaging U.S.-China relationship remains front and centre.

Global equities trade under pressure in the last session of the month after U.S. President Donald Trump stepped up his tough talk on trade. The ‘big’ dollar and Treasuries both trade steady.

Ahead of the open, the Euro auto sector is again one of the big losers as Trump casts doubt on the scope of the EU-U.S. trade deal and after he suggested moving towards further tariffs on Chinese goods as soon as next week.

Emerging market currencies continue to experience the fall out of a plummeting Argentina peso. On contagion fears, the Indian rupee has dropped to a new record low outright, while South Africa’s rand slid to the lowest in two years.

Elsewhere, the EUR (€1.1673) has edged a tad higher, while and the yen (¥110.75) trades somewhat steady. An exception, the Turkish lira, TRY (down 0.9% at $6.5822) has rallied after Turkey announced measures designed to encourage local currency saving, cutting a tax on lira deposits and increasing a tax on foreign currency deposits.

In Japan, the ended flat overnight, snapping an eight-session rally after Trump said he is ready to quickly intensify his trade war with China. The Nikkei has ended the day 0.02% lower after gaining 1.2% for the week and 1.4% for the month.

In Hong Kong and China, stocks fall in renewed Sino-U.S. trade war fears. Investor sentiment was also hurt by a slump in the index heavyweight Tencent, as Beijing’s proposed tougher measures against online gaming hit game operators. The fell 1.0%, while the lost 0.8%. In China, the index fell 0.5%, while the dropped 0.45%.

In Europe, regional bourses have opened lower across the board on global trade concerns. The Euro-auto sector is under pressure from reports that Trump felt EU tariffs are “not good enough,” while Italian stocks are under pressure due to the country’s exposure to Argentina. 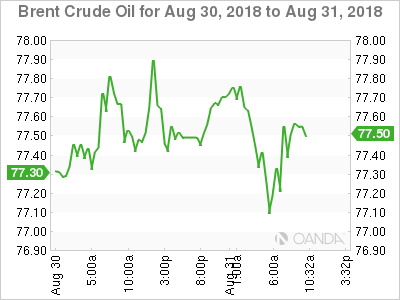 Oil prices are under pressure amid concerns that the Sino-U.S. trade war could intensify, although looming U.S. sanctions against Iran is limiting the decline.

Nevertheless, with Venezuelan supply falling sharply and concerns around U.S. sanctions against Iran that will target its oil exports from November, crude prices this month are expected to record 4% rise for Brent and a 2% increase for WTI.

Note: The central theme for Q4 should be global trade disputes and their effects on economic growth and, by extension, fuel demand. 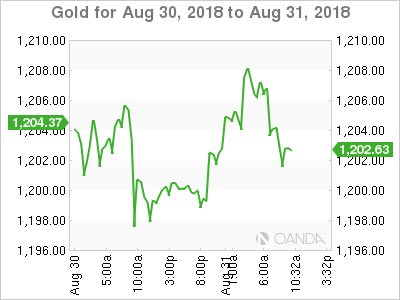 Euro trade tensions are again at the forefront and are pushing 10-year German Bund yields back below 0.40% at 0.36% as investors seek safe havens.

Note: There is no government bond supply in the eurozone today but France and Spain will announce the details of their upcoming bond auctions to be held on Sept. 6.

Note: Fitch Ratings is expected to release its review after markets close. It rates Italy BBB with a stable outlook.

EUR (€1.1673) received some support in late Asia trading as ECB’s Nowotny believed that the central bank should focus on moving the “deposit” rate out of negative territory as he saw “no immediate risks arising due to Italy.” Investors are wary that the single unit could find late afternoon support if Italy’s sovereign rating is not cut by Fitch. Also, providing some support was this morning’s Eurozone “flash” CPI print (see below) remaining above the ECB’s target for the third consecutive month, but it did come in below expectations.

Brazil’s central bank announced FX intervention – first intervention in two months – Argentina Central Bank (BCRA) raised its LELIQ Rate by 1500 bps to 60.00% for its fifth intra-policy move this year. Indonesia’s Central Bank reiterated its commitment to guard against volatility in FX and bond markets and continue with its duel interventions, while in Turkey, the government revised its withholding tax related TRY deposits which cut the withholding tax on lira deposits while raising tax on FX currency deposits of up to 1year. 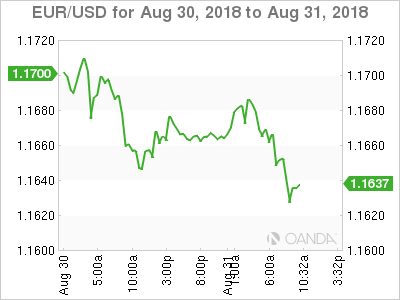 Data this morning showed that Eurozone inflation cooled slightly this month, which could suggest that the ECB may remain cautious its approach to dialling back monetary stimulus.

The EU’s statistics agency said in a preliminary estimate today that consumer prices in the eurozone rose 2% on the year in August, a tad weaker than the 2.1% recorded in July.

Digging deeper, energy prices rose at a slower pace than in July, as did prices for services and industrial goods.

Officials in July felt that “monetary policy had to remain patient, prudent and persistent,” the ECB’s minutes said.

Note: In June, the ECB reiterated that it expects to phase out its bond-purchasing program by the end of 2018, although it has signalled that its policy rates will remain unchanged at least through next summer. 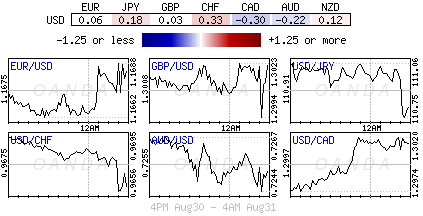