The trend for a rising U.S. dollar is taking a pause, with the dollar edging lower against G10 currency pairs. A lack of major economic data releases and a stabilizing Chinese yuan suggest a reprieve for risk assets and EM currencies today.

This week brings relatively little economic data, but investors will tune in Friday when July’s U.S. is reported – a pickup in inflation could temper the dollar’s rally?

In Japan, the share average gained overnight after index-heavyweight SoftBank jumped on the back of strong Q1 results, while a rebound in Chinese shares also helped market sentiment. The Nikkei ended up 0.7%, while the broader rallied 0.8%.

Down-under, stocks were one of the worst performers overnight as the market was held back by a deep pullback in the materials sector. The fell 0.3% as BHP Billiton (LON:) retreated 1.4%. In South Korea, stocks overcame some opening-hour softness to rise solidly, capped by a rally into the close. The finished up 0.6% as index giant Samsung (KS:) climbed 2%.

In Hong Kong, shares ended higher as property stocks gained. Both the and rallied 1.5%.

In China, stocks rebounded overnight following a heavy four-day selloff, with infrastructure names leading the charge. The index jumped 2.7%, while the blue-chip index was up 2.92%, its biggest percentage jump in two years.

In Europe, regional bourses trade higher across the board following on from strong Asian Indices and positive U.S. futures. 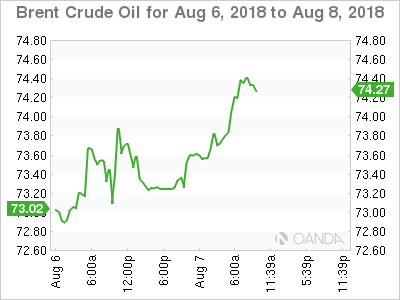 Oil prices are better bid now that the U.S. has re-introduced sanctions against oil exporter Iran that is expected to tighten global supply.

Note: U.S. sanctions against Iran, which shipped out 3 million bpd of crude in July, officially came into effect at 12:01 am EDT this morning.

The market is anticipating that supply losses could range from 600K to 1.5M bpd. 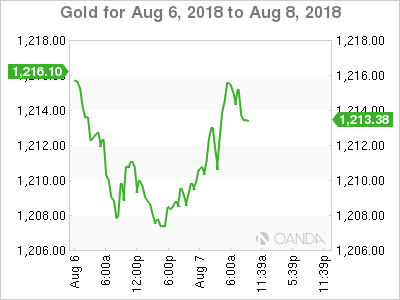 Doing the rumour rounds – the Bank of Japan (BoJ) board is said to have considered raising rates before tweaking policy in July – BoJ said to have deliberated tightening in January, but did not do it amid market turbulence. The moves the BoJ took last week are said to be a compromise between board member Amamiya and Governor Kuroda.

Last week, the Fed turned up the rate-hike heat, upgrading both economic activity and household spending from the “solid” to the “strong” camp. Futures prices are setting up another rate hike at the September FOMC meet. However, beyond that, the Fed’s timing will ultimately be decided by incoming data – last week was perhaps less in the ‘strong’ and more in the ‘solid’ camp. 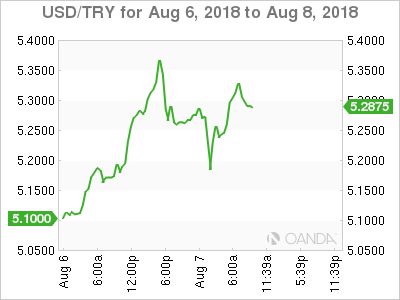 Trade tensions remain the predominate theme, but the USD is seeing some consolidation in its recent strength as Treasury bond yields ease a tad.

The Turkish lira ($5.2406) has recovered some lost ground after plummeting to new record lows yesterday ($5.42), helped by the Central Bank of the Republic of Turkey (CBRT) announcing a cut in the foreign exchange reserve requirement ratio (RRR) for commercial banks, a measure which should boost dollar liquidity. Turkish 10-year bond yields have backed up 25 bps to 20%.

Note: The plunge in the currency over the past few weeks is now on a scale, which has, in the past, prompted the CBRT to hike interest rates aggressively. Will the CBRT hike the repo rate this week?

Sterling is trading atop of its one-year low outright yesterday, falling 0.5% to £1.2935, amid concerns the U.K. might fail to reach an agreement on Britain’s exit from the E.U. Pressure on the pound has come after U.K. Trade Secretary Fox estimated there is a 60% chance that “no” Brexit deal would be reached.

(€1.1558) has stayed above the psychological €1.15 handle for the time being and remains confined to its recent trading range. 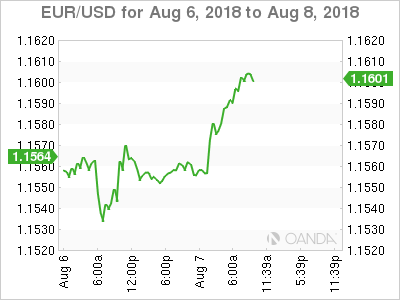 Data this morning showed that German exports were flat in June compared with May, which may suggest that mounting trade tensions are starting to bite.

Imports, however, rose 1.2% on the month. As a consequence, Germany’s adjusted trade surplus narrowed to €19.3 billion in June from €20.4 billion in May.

Other data showed that German industrial output declined in June by 0.9% from a month earlier, slightly more than expected, but total production rose 2.5% when taking calendar effects into account.

The fear about a potential trade war will continue to bring uncertainty, and uncertainty will bring a delay in investment decisions. 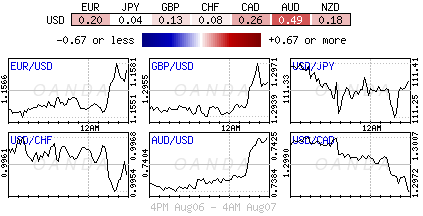