Capital markets remain relatively listless, especially during this week in which much of Asia is on holiday. Interested parties are desperately seeking out any market momentum to apply to their convictions.

Perhaps the ‘big’ dollar may have to wait to react to this evenings State of the Union address from President Donald Trump – market focus is likely to be on any indications on how Sino-U.S. trade negotiations are going, anything positive on the trade news front should provide support for the greenback.

Until then, it’s about picking your poison – despite volatile U.S. and Euro equity and bond markets, the forex market remains confined to its recent tight trading ranges outright.

Ongoing trade tensions between the U.S. and China, rising populism, budgetary issues in Italy, French protests, monetary policy divergence, and Brexit have all being taking their toll on financial markets, except the forex space – that remains in a ‘wait and see mode.’

In Japan, the ended lower overnight, breaking its three-day rally as the market digested a slew of corporate earnings. The index ended 0.19% lower, while the broader edged up 0.1%.

Down-under, financial equities pushed Aussie stocks to record one of their best day in years as the market saw plans of a high-powered banking inquiry as “less severe” than expected, and not posing a serious threat to one of Australia’s most profitable sector. The surged 1.95% to trade atop its four-month high – the benchmark rallied 0.5% on Monday.

Note: The RBA remains in focus this week – Governor Lowe is expected to speak on Feb 6th, while the RBA quarterly statement on monetary policy seen on Feb. 8th. 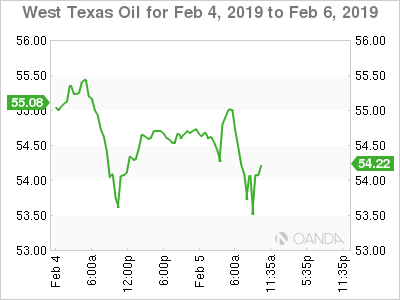 Oil prices are better bid as the market expects U.S. sanctions on Venezuela and production cuts led by OPEC+ to trump any glut. However, U.S. data showing a decline in factory orders is providing a cap to the market.

Analysts note that there are currently little signs of any overhang in the market now that the U.S. has imposed sanctions on Venezuela, on top of the reduced supply from Saudi Arabia.

Note: Last week, the U.S. administration announced export sanctions against state-owned oil firm Petroleos de Venezuela SA (approx. +500k bpd) – this has led to some disruption for oil refineries on the Gulf coast. They have had to seek alternative heavy crude supplies from Canada.

OPEC supply fell this month by the largest amount in two-years, which has helped to offset limited compliance so far by non-OPEC Russia.

While OPEC cuts, the U.S. continues willing to expand its supply. However, data on Friday showed a drop in the number of U.S. oil rigs on line to their lowest in eight-months, lending temporary prices some support.

But weighing on markets, U.S. government data yesterday showed that new orders for U.S made goods unexpectedly fell in November, with sharp declines in demand for machinery and electrical equipment. The prospects for growth in fuel demand have been clouded by poor economic data in China and U.S.-China trade tensions.

Ahead of the U.S. open, gold has inched a tad higher in the Euro session in thin trading as investors made purchases after prices touched a one-week low in yesterday’s session. However, gold ‘bulls’ can expect that improved market risk appetite to cap the yellow metal’s gains. has rallied 0.2% to $1,314.10 per ounce, after having printed its weakest price since January at $1,308.20 in yesterday’s session. U.S . are firm at $1,318.10 an ounce. 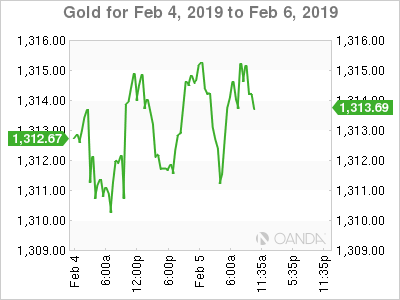 3. Reserve Bank of Australia (RBA) sticks to the script

The RBA in its first policy meeting for 2019 overnight stuck with its upbeat narrative on the Aussie economy. The official cash rate remained at 1.5% with the RBA forecasting a “gradual” lift in inflation in 2019 and 2020, and 3% GDP growth in 2019.

Governor Lowe said that the growth forecast is enough for unemployment to continue falling. He reiterated that the low level of interest rates was continuing to support the Australian economy and that inflation remains “low and stable.” He viewed that the AUD (A$0.7245) has remained within a narrow range.

Note: AUD rallied on the report which has disappointed a lot of the policy doves in the market. Futures traders have already priced in a 50% likelihood of a rate cut before the end of this year. The RBA shows no sign yet of delivering that. 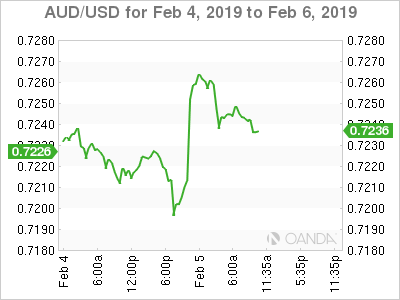 The ‘mighty’ USD is maintaining a slightly firmer tone outright against G10 pairs in quiet trading with the dollar supported by slightly higher U.S. Treasury yields.

(€1.1420) is a tad softer as this morning’s PMI Services data print hovered around the contraction level for the key countries and highlighted the growth concerns for the region.

(£1.3007) saw any of its Euro session gains evaporate in the aftermath of weak PMI Services data (50.1). The overall the reading was the lowest print since the Brexit vote back in 2016.

(A$0.7242) is a tad firmer in the aftermath of the RBA decision to keep its policy steady and was less optimistic on both the growth and inflation front. Ahead of the RBA statement, the futures market was implying a +50% chance of RBA rate cut by the end of the year amid weaker than expected December and Q4 retail sales earlier data this week. 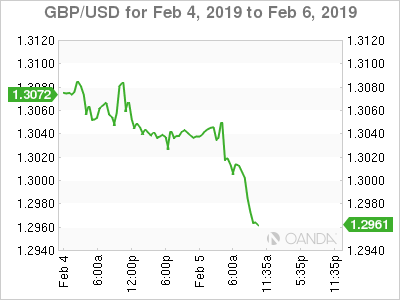 Data this morning from the world’s fifth-biggest economy showed that the IHS Markit/CIPS UK Services Purchasing Managers’ Index (PMI) fell to 50.1 in January from 51.2 in December – the 50 mark separates growth from contraction. Today’s print was the lowest in nearly three-years and suggests that the British economy is flat-lining after losing momentum in H2 2018.

With Brexit nearing (March 29), the U.K’s dominant services sector is reporting job cuts for the first time in six-years and falling new orders. Sterling has slipped to trade atop of its two-week low outright on the news.

Note: Today’s print will likely worry BoE ahead of their latest interest rate decision announcement and new forecasts for the economy on Thursday. 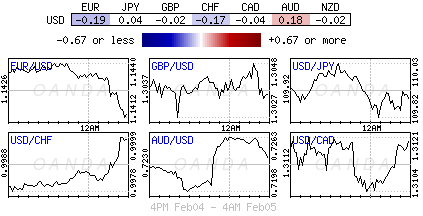