Overnight, Euro bourses along with U.S. equity futures have edged a tad higher on the back of a plethora of positive corporate earnings boosting investor sentiment.

Also, China’s determination to support the world’s second largest economy has helped to support various risk assets in the Asia session overnight. Is there another cut to its reserve-requirement ratios (RRR) coming? China needs to shore up economic growth in the face of an actual trade war.

In FX, the EUR (€1.1695) is little changed, supported by German data showing that they have so far resisted worries over disruption to trade. In China, the People’s Bank of China (PBoC) guided the to new 12-month lows.

U.S. Treasuries have backed up a tad along with Euro sovereign bonds.

Elsewhere, prices trade atop of its recent lows, while gold prices are steady.

On tap: As the week continues, more corporate earnings come on line, while the ECB’s monetary policy will be the markets focus on Thursday. On Friday, Trump and his economic team are increasingly convinced the GDP numbers will be strong – he expects Q2 GDP to rise to as much as +4.8%!

Shares in Asia rallied on news China will increase spending on infrastructure among other measures to bolster growth.

In Japan, the share average bounced overnight, reducing Monday’s losses as the yen’s (¥111.23) rally stalled exporters. The Nikkei ended the day up 0.51%. The index had fallen 1.3% the previous session as the yen soared outright. The broader rallied 0.47%.

Down-under, shares rallied on Tuesday as firmer commodity prices supported material stocks, while financials followed its Wall Street peers. The rose 0.6% at the close of trade. The benchmark fell 0.9% on Monday. In South Korea, the stock index rose overnight, up 0.48%, in line with its Asian peers, while the won tumbled ahead of Friday’s U.S. advanced growth.

Note: South Korea’s Kospi has experienced the weakest H1 in five years – down 5.7%.

In China, government bond yields and equities rallied overnight after authorities promised to pursue a more vigorous fiscal policy, in an effort to support growth amid rising economic headwinds. The blue-chip index rose 0.9% while the ended up 1.1%. In Hong Kong, the Hang Sang index rose 1.44%, while the China Enterprises Index gained 0.5%.

In Europe, regional indices trade higher across the board, supported by generally strong manufacturing PMI data and upbeat earnings from European names. 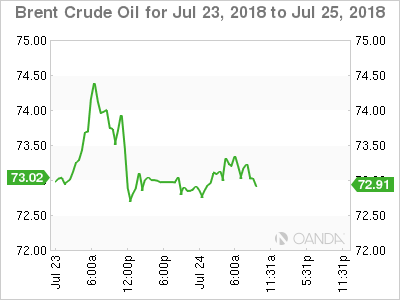 Note: Both benchmarks have fallen this month as crude supplies from Russia, Saudi Arabia and other members of the OPEC have increased and unscheduled production losses have eased.

To date, market sentiment remains driven by geopolitical worries in the Middle East or that Trump’s trade dispute with G7 economies could dampen global growth. 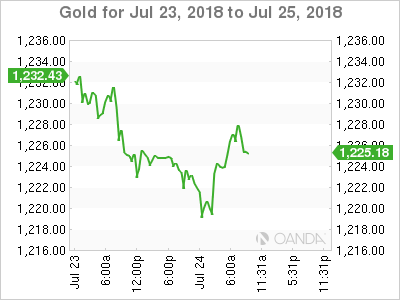 3. Sovereign yields continue to back up

The Nikkei has suggested that politics could be a factor at the BoJ upcoming July 31 policy decision. It suggests that political considerations could pressure the central bank to take action at the July meeting, as a policy decision at the September meeting could influence the LDP leadership elections.

It also notes that Japan has regional elections in April 2019, while in October of 2019 the consumption tax is expected to rise to 10% from 8% – consensus believes the further you look out the ‘curve’ the more difficult it will be to make changes to policy.

In Canada, sovereign bond prices fell yesterday after positive economic data weakened the markets demand for the safety of government debt. Yields on the were recently at 2.22% after it was reported that Canadian wholesale trade rose 1.2% m/m in May. 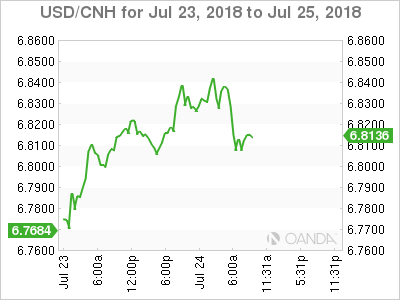 Overnight, the U.S. dollar has regained some strength, boosted by rallying Treasury yields.

(€1.1685) has reversed some of its initial losses in the Euro session as the major PMI manufacturing data beat expectations. The Euro upside has been limited in the belief that the ECB is on hold regardless of any incoming data.

(¥111.23) is holding above the psychological ¥111 handle as the market debates the prospect of a possible tweaking the BoJ’s policy on July 31.

(£1.3109) trades atop of its recent lows as BoE member, Anthony Broadbent, stated that he was not sure if whether he would vote for rate hike next month. 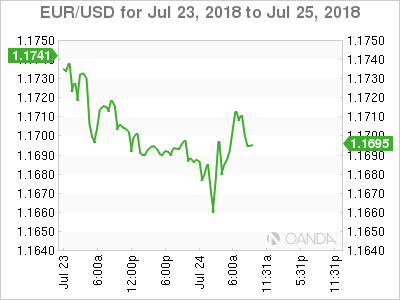 July data saw a further pick-up in the rate of growth of Germany’s private sector economy from a 20-month low in May to a five-month high, driven by a stronger increase in manufacturing output.

The IHS Markit Flash Germany Composite Output Index rose to 55.2 in July from 54.8 in June, to signal a second successive monthly acceleration in the rate of growth in private sector business activity.

Note: By sector, services business activity increased at a solid rate that was little changed from June, while manufacturing output growth was the fastest since April. 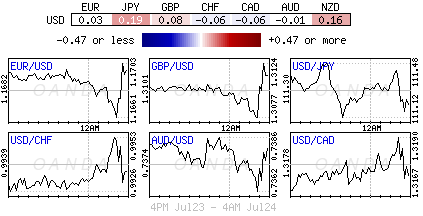