The Trump-Kim summit came and went with little market movement. Instead, investors and dealers remain focused on a plethora of macro-events and data coming over the next few days. The meeting has produced much positive symbolism, but little in the way of substance as vague pledges just doesn’t cut it for markets.

Overnight, stocks have climbed; Treasuries prices have edged a tad lower, while commodity prices remain range-bound. Safe-haven assets including the yen and gold have slipped as Trump and Kim signed a document pledging to work towards peace on the Korean peninsula.

Investors focus has shifted to a number of Tier I central banks monetary policy decisions – tomorrow, the Federal Open Market Committee (FOMC) is expected to hike interest rates, while the European Central Bank (ECB) officials are poised to hold the first formal talks on ending it’s bond-buying program (QE) Thursday, while the Bank of Japan (BoJ) meets early Friday, with no change to policy expected.

In Japan, the benchmark average advanced 0.3%, its highest closing since May 22 and not far from its four-month intra-day high as U.S.-North Korea’s summit fuelled progress. The broader added 0.3%, also hitting a near three-week high.

Note: The BOJ will conclude a two-day meeting on Friday at which it is widely expected to keep its loose monetary policy intact.

Down-under, shares ended higher overnight, propped up by strength in consumer and pharmaceutical firms and amid a positive outcome at the Singapore Summit. In South Korea, the benchmark index, which briefly inched back into positive territory mid-session, closed virtually unchanged, down 0.05%.

In Hong Kong and China, stocks ended higher on Tuesday, after the U.S. and North Korea signed a comprehensive deal aimed at the de-nuclearization of the Korean peninsula.

In Europe, regional bourses trade mixed, following Asia’s example overnight. Some equities have found traction on the positive tone from the Trump-Kim meeting in Singapore. 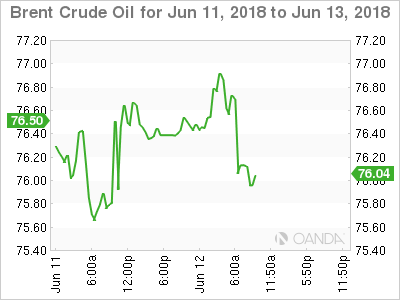 2. Oil edges up, but bulls remain wary ahead of OPEC meeting, gold lower

Oil prices are rallying for a second consecutive day, as investors prepare for a key meeting of the OPEC producer group next week (June 22).

Crude remains in a tight trading range and in line with the broader financial markets, which were largely unphased by a U.S.-North Korea summit.

OPEC, together with partners, including Russia, has cut oil output by 1.8 million bpd since January 2017 in an effort to boost the market.

With U.S. sanctions threatening to cut Iranian exports and the potential for more declines in Venezuelan production, OPEC’s Saudi Arabia and Russia have indicated they would be willing to raise output to make up for any supply shortfall.

Data last Friday showed that the number of new rigs drilling for oil in the U.S. rose by one last week to 862, it’s highest since March 2015, according to Baker Hughes. This would suggest that U.S. crude output, already at a record high of 10.8m bpd, could climb even further. 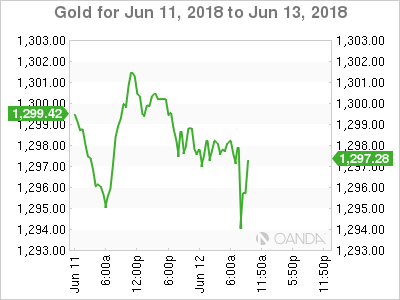 With the Fed expected to hike rates tomorrow, investors are focused on how the U.S. policy-makers will describe its monetary policy as borrowing costs return to more normal levels amid an ongoing economic expansion.

Will the Fed drop language it has used over the past two-years that says rates would remain below historical levels “for some time” to come? That small change alone would mark a broad acknowledgement that both U.S. monetary policy and the economy in general are starting to look increasingly “normal,” both domestically and abroad. 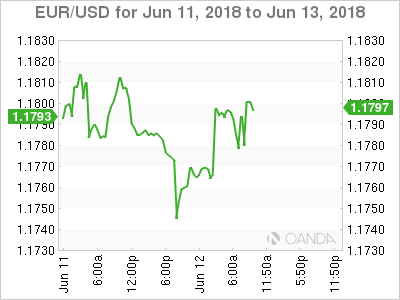 Dealers and investors are shifting their focus from the Singapore Summit – which is naturally short on details – to the upcoming policy meetings this week (Fed, ECB & BoJ).

Overnight, the USD index hit a one-week high during the Asian session, but has since seen its gains slip away as the Euro morning progresses.

(£1.3408) focus turns to politics ahead of the Parliamentary vote on the EU Withdrawal bill. U.K. data this morning (see below) has allowed the pound to remain on firmer footing for now.

Note: U.K. Tory member Lee (pro-remain) resigned as a U.K. minister over Brexit ahead of tomorrow’s parliamentary vote on the EU withdrawal bill.

(€1.1797) continues to hover atop of the psychological €1.1800 handle as investors turn to the central banks rate decisions this week for direction. 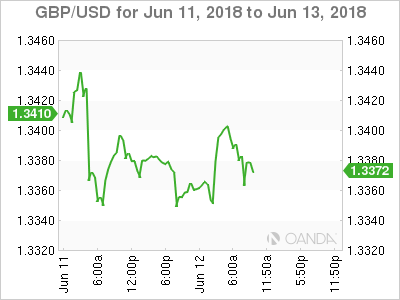 U.K. data released this morning showed that the number of people employed in the U.K. continued to rise in the three months to April, while wage growth slowed.

Data released by the ONS showed that the number of people in work in the U.K. rose in the three months to April to 32.4 million, which is a record, while the unemployment rate held steady at 4.2%.

Add today’s release with the tepid numbers for Q1 and Q2 should further fuel questions about the prospects for an interest-rate rise by the BoE this year.

Wage growth in the three months to April slowed slightly, to 2.8% from 2.9% in the previous three months. Market expectations forecasted a growth rate of 2.9%.

Add today’s report to yesterday’s weaker U.K. economic figures, which showed a sharp fall in manufacturing output in April, suggesting the weakness the economy displayed in Q1 has extended firmly into Q2.

Other Euro data this morning showed that German economic sentiment dropped in June, extending its losing streak. The ZEW’s measure of economic expectations fell to -16.1 in June from minus -8.2 in May – the lowest reading in six years. 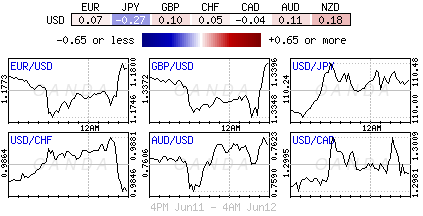