Capital markets are in a sombre mood as a number of reasons for caution come to the fore.

Brexit rhetoric and the Italian government’s fiscal plans top the agenda, followed closely by trade deals and tariffs and political drama in Washington.

Amid the risk-off mood the ‘big’ dollar again has found support against G10 pairs. Euro stocks and U.S. futures are currently following Asian declines, as Treasuries and bund prices advance.

The EUR (€1.1517) remains under pressure for a fifth consecutive day, pressured by remarks from Italy’s Deputy PM Luigi Di Maio that they will not change its budget deficit targets despite pressure from Brussels and its EU partners.

Elsewhere, the pound (£1.2960) succumbs to Brexit rhetoric at the Conservative Party annual conference.

On tap: Fed Chair Powell is due to speak (12:45 p.m. EDT) about the outlook for employment and inflation at the National Association for Business Economics Annual Meeting, in Boston. Audience questions expected.

Asian equity markets traded generally lower as China remains on holiday, with Japan being the exception.

In Japan, the edged up to a fresh 27-year high overnight, building on recent strength thanks to upbeat earnings hopes, mostly on the back of a weaker yen. The Nikkei share average ended 0.1% higher, while the broader was up 0.3%.

Down-under, Aussie shares closed at their lowest in more than three months overnight as financial stocks extended losses following a Royal Commission interim report on the sector. The fell 0.8%, after dropping 0.6% on Monday. In South Korea, stocks saw their worst day in nearly two months on heightened U.S.-China tensions. The fell 1.25%, marking its biggest percentage loss since Aug. 13.

In Hong Kong, stocks also fell overnight on signs of weakness in China’s manufacturing sector. Resuming trade after a public holiday yesterday, the benchmark was down 1.64%.

In Europe, regional bourses open down across the board with Italy at the fore, as concerns over Italian finances keeps risk sentiment depressed. Four-year high Brent prices are supporting energy stocks. The financial sector remains the worst performer. 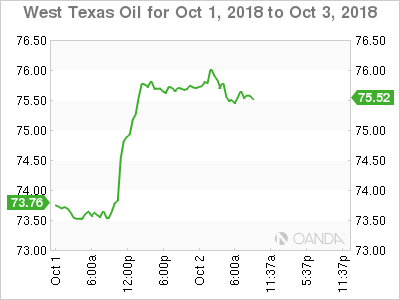 Earlier this morning, U.S. oil prices hit their highest level since November 2014, while Brent crude trades atop of yesterday’s four-year high print, as markets prepare for tighter supply once U.S. sanctions against Iran begin to hit in November.

Market sentiment also got a boost from yesterday’s announcement of a “new” trilateral pact between the U.S., Mexico and Canada (USMCA), saving a $1.2 trillion a year open-trade zone that had been on the verge of collapse.

Iran’s oil industry, which at its most recent peak this year, supplied 3% of the world’s almost 100 million barrels of daily consumption. U.S. sanctions are set to start on Nov. 4. 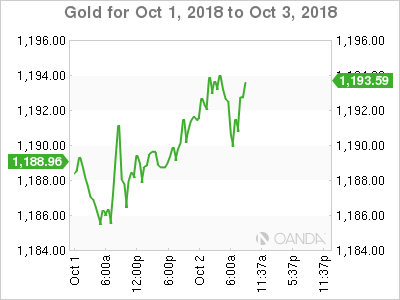 3. BTP/Bund yield gap at its widest in five years

The Italian/German 10-year bond yield spread trades atop of its five-year highs as eurozone officials warned of a return to crisis days and an Italian lawmaker said most of Italy’s problems would be solved if it returned to its own currency. 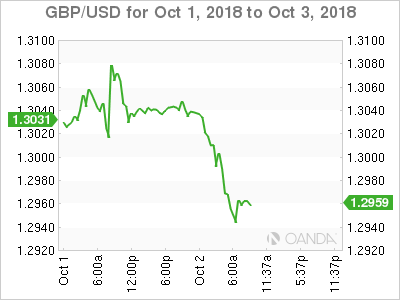 As the market waits for Prime Minister Theresa May’s new Brexit draft proposal on the Irish border, uncertainties continue to threaten sterling (£1.2966) and this morning’s weaker construction PMI survey has caused it to fall further. Sterling fell to a three-week low of £1.2957, from 1.2987 beforehand, after data showed construction PMI fell to 52.1 in September from 52.9 in August, signalling “the weakest upturn in output for six months.”

Down-under, (A$0.7173 down 0.77%) has retraced earlier gains after the Reserve Bank of Australia (RBA) left rates on hold (see below), while the has declined after yesterday’s NZIER Business Confidence (-30 vs. -20) fell to the lowest level in nine years. 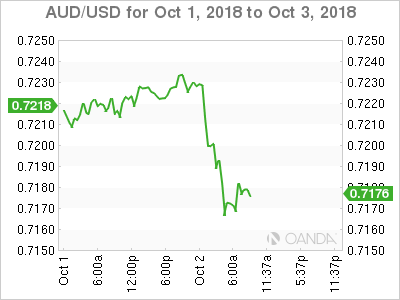 It was as expected from the Reserve Bank of Australia (RBA), leaving the key policy rate at record lows (1.5%) and traders with the impression that the RBA plans to remain sidelined for some time.

However, global expansion and recent domestic growth are positives and the RBA continues to expect GDP growth of more than 3% through 2019 and for the unemployment to drift down towards 5% over time. 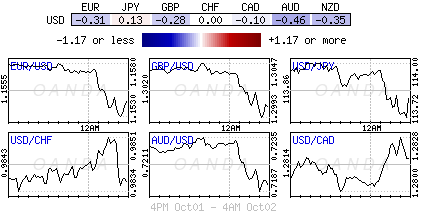