Global stocks have swung sharply lower overnight, amid growing fears about the health of the Chinese economy and a slew of geopolitical concerns – U.K., Italy and Saudi Arabia.

In Italy, the populist-led government has indicated that they plan to proceed with their spending plans despite the opposition from EU lawmakers. Markets are awaiting the formal EU decision on Italy’s budget.

In the U.S., President Donald Trump indicated late Monday he wanted more information about the death of Jamal Khashoggi before the U.S. proposed an official reaction.

In the U.K., the ‘no-confidence’ threat to Prime Minister Theresa May’s leadership over Brexit discussions has, thus far, come to nought, but not before pushing the sterling to three-week lows earlier this morning.

Global equities have failed to gain a third consecutive session reprieve after China announced Monday new measures to ease the funding worries of private companies, as they sought to restore confidence in China’s economy.

In Japan, stocks fell on Tuesday, with the broad index retreating to a seven-month low as subdued corporate earnings and a pullback in global equities weighed on investor sentiment. The closed 2.67% lower, while the broader Topix fell 2.63%.

Down-under, shares also closed lower as sentiment was hit by domestic and global political uncertainty. The closed down 1.1%, a third consecutive session of losses, following Monday’s 0.6% drop. In South Korea the index fell 2.3% to its lowest level in over two years. The potential for U.S. tariffs on Korean cars and auto parts has been stocks biggest blight for months now.

In China, the and the Shenzhen A Share dropped 2.3% and 2.1%, respectively, while Hong Kong’s was dragged down 2.8% by sinking financial stocks. The overnight losses marked an end to the regions sharpest two-day rise in nearly three years. 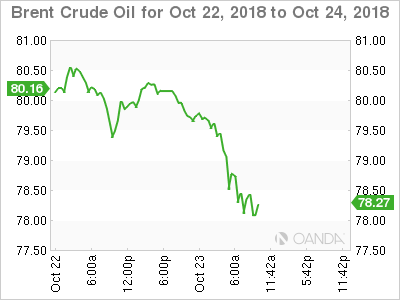 2. Oil falls as the Saudi’s say they will be ‘responsible,’ gold higher

Oil prices has eased a tad ahead of the U.S. open after Saudi Arabia said it would play a “responsible role” in energy markets.

Investors had been worried that Saudi Arabia would cut crude supply in retaliation for potential sanctions against it over the Jamal Khashoggi murder.

The Saudi’s have given assurance that it intends to keep markets well supplied despite its increasing isolation by the western hemisphere.

OPEC agreed in June to boost supply to make up for the expected shortfall in Iranian exports, however, recent data suggests that OPEC is struggling to add barrels as an increase in Saudi supply was offset by declines elsewhere.

Nevertheless, relief may come from the U.S., where offshore drillers added four oil rigs in the week to Oct. 19, bringing the total count to 873, according to Baker Hughes data last Friday. After months of stagnation, production is expected to rise.

However, undermining sentiment is weakening China growth data and the ongoing Sino-U.S. trade dispute. The full impact of the trade war is expected to hit markets early next year and provide a considerable drag on oil demand. 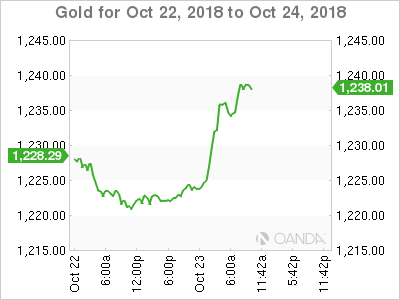 Last Friday was a disappointing end to the week for Canadian numbers, as consumer spending and inflation data both dropped into negative territory. The disappointing headlines are not expected to affect the Bank of Canada’s (BoC) plan to hike rates tomorrow by 25 bps to 1.75% – it would mark the third rate increase in 2018.

Current market consensus believes that Italian budget worries are unlikely to influence the ECB’s upcoming decisions on Thursday – the ECB is expected to stay on track to end net asset purchases in December and raise the deposit rate by 20 bps in Q3, 2019. Mario Draghi and company will certainly be worried about the potential implications of escalating market tensions and true to form, markets can expect the European Central Bank to intervene “if and when” a further escalation raises the chances of a systemic problem.

Sweden’s Riksbank meets tomorrow and the focus will be on whether the central bank will forecast a December or a February rate increase – market expectations are for a December hike. Expect little movement to SEK if the Riksbank guides on a December rate increase. Norway’s Norges Bank meets Thursday and no rate announcement is expected.

The Central Bank of the Republic of Turkey (CBRT) is expected to hold its main interest rate steady at its meeting on Thursday. At its September meeting, the CBRT raised its main interest rate by 625 bps to 24%. Having an influence on higher rates was the volatility and negativity of TRY. However, the TRY has recently rallied on the back of Turkey releasing American priest, Andrew Brunson, leading to a softening of diplomatic tensions. 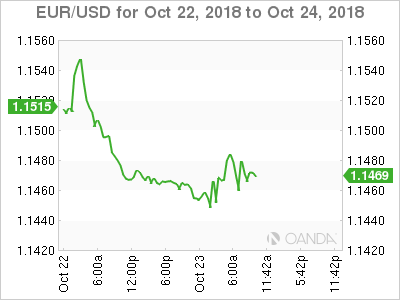 The ‘sea of red’ in stocks across the board has the market bulling up on the historical go-to-safe-haven flows – CHF, JPY, USD, gold and Treasuries.

The market is waiting for the EU’s formal decision on Italy’s budget, but both parties are looking to sort out their material differences. Investors expect a market-friendly outcome from S&P Ratings on Italy this coming Friday, Oct. 26 , similar to Moody’s announcement last week.

(€1.1483) began the session on back foot, but hope expressed by Italy that the ECB would stand by with support has helped to calm any volatility and push the single currency towards the psychological €1.15 handle.

(£1.2989) main focus is Brexit negotiations. May is meeting her cabinet today and no leadership challenge appears to be on the horizon, for the moment at least. The pound is handily off its three-week lows regarding May’s tenure. 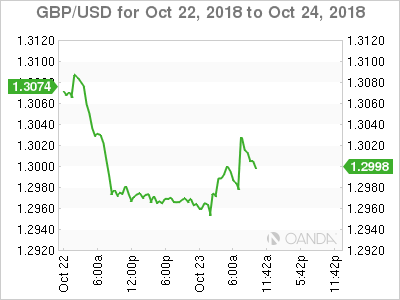 Data earlier this morning showed that Germany’s producer prices rose the fastest pace in a year in September.

Producer prices grew 3.2% year-on-year in September, after rising 3.1% in the previous month. The market was looking for a 3.0% gain.

The inflation rate was the highest in 12 months, when prices advanced 3.2%.

Digging deeper, on a month-on-month basis, producer prices climbed 0.5% after a 0.3% increase in August. The market was looking for an unchanged at 0.3%.

Ex-energy, PPI remained unchanged m/m, while rising 1.6% on the year. 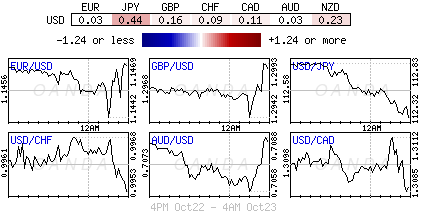