In the last week of August, it was trade and tariff wars along with emerging markets currency capitulation that were the driving forces behind asset prices.

Thrown into the mix, G10 central banks and geopolitical risks, the month of September volatility should not disappoint.

Topping investors’ agenda this week is the Sino-U.S. trade dispute and Canada NAFTA talks, which are both threatening to escalate along with EM fallout as Argentina’s austerity measures shake emerging markets.

Note: Trump may announce implementation of tariffs on as much as $200 billion in additional Chinese products as soon as Thursday.

Brexit discussions are again pressuring sterling (£1.2830), now that the market is pricing 25% odds that Britain could leave the EU next March without a deal.

Currently, Euro stocks are climbing and U.S. futures point to a higher open this morning after a listless session in Asia. The ‘big’ dollar again has found some momentum and EM stocks have pushed higher for the first time in a week.

On the data front, the first of the month brings final PMI readings for manufacturing, services and a composite reading. Down-under, Australia releases Q2 GDP data this evening and Canada will release its important merchandise trade (Sept. 5) and employment report (Sept. 7). The Bank of Canada is expected to hold rates steady tomorrow (Sept. 5).

On the whole, Asian shares rallied overnight, but investors remain apprehensive as the Sino-U.S. trade dispute threatens to escalate this week.

In Japan, the edged a tad lower, falling 0.1%, after trading often between positive and negative territory. The broader also fell 0.1% as investors wait to take their cue this week from the States.

Down-under, shares fell overnight as reports of fresh investigations into financial institutions kept investors on edge. The dropped 0.3% at the close of trade. In South Korea, the stock index rallied 0.38%, following the turnaround in Chinese shares, despite the escalation of a Sino-U.S. tariff war.

In Hong Kong, stocks ended higher as telecom shares rallied on merger speculations. The ended 0.9% higher, while the closed up 0.7%.

In China, equities snapped a five-day losing streak, as investors hunted for bargains in beaten-down real estate and banking stocks. However, pending U.S. tariffs capped gains. The index closed up 1.1%, while the blue-chip index ended 1.27% higher.

In Europe, regional bourses are trading mixed and are off their intraday high open. The trades little changed after outperformance yesterday ahead of testimony from Bank of England members in front of the Treasury select committee. 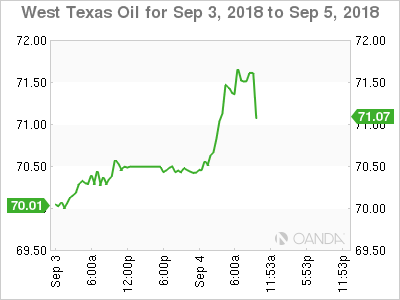 Oil prices have rallied aggressively overnight on news of the immediate evacuation of two Gulf of Mexico oil platforms in preparation for Hurricane Gordon.

Note: the jump is more significant since U.S. crude did not trade Monday due to the Labour Day holiday.

Oil markets have tightened over the past four weeks, pushing up Brent prices by more than 10% as investors anticipate less supply from Iran as U.S. sanctions on Tehran begin to hurt.

Note: The yellow metal is down 8% this year amid rising U.S. interest rates, trade disputes and the Turkish currency crisis – the U.S. dollar remains the safe haven currency of choice. 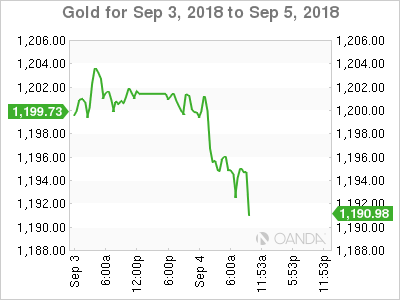 Reserve Bank of Australia (RBA) left its cash rate target unchanged at 1.50% as expected overnight and the accompanying statement was little changed from the last go-around. Policy-makers reiterated their stance that low rates were supporting the economy and inflation, and that progress on unemployment/inflation is expected to be gradual. They saw GDP to average slightly higher than 3% in both 2019 and 2020.

In Europe, tame Swiss inflation data support the view that the Swiss National Bank (SNB) will not be raising rates before the ECB does (currently expected in September 2019). Data this morning showed that annual Swiss inflation was 1.2% last month, while core inflation was just 0.5%. 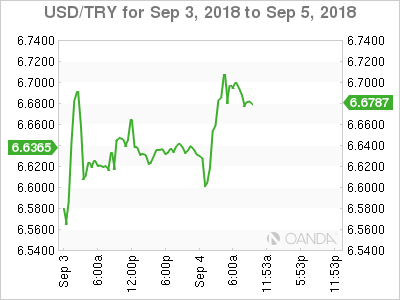 4. EM rout not yet complete

Yesterday, Argentine President Mauricio Macri announced new taxes on exports and steep cuts to government spending in what he termed “emergency” measures to balance next year’s budget. The Argentine peso closed 3.14% weaker and is expected to face further pressure this week.

In Turkey, the Central Bank of the Republic of Turkey (CBRT) signalled yesterday that it would take steps to combat “significant risks” to price stability and also hinted of interest rate hikes. Investors have lost faith in the central bank’s independent authority – the TRY is trading down another 1% at $6.6920.

has hit a fresh record high as the pair approaches $71.54 level. It’s expected that state banks have been selling U.S. dollars on behalf of the Reserve Bank of India (RBI).

In Europe, is lower for the fifth consecutive session, probing the lower end of the £1.28 handle as doubts continue to linger on Brexit negotiations and weaker UK PMI data (see below). Focus for the pound now shifts to the BoE Treasury-select testimony this morning where Governor Mark Carney would likely be questioned on whether he plans to stay on beyond his June 2019 term end-date. 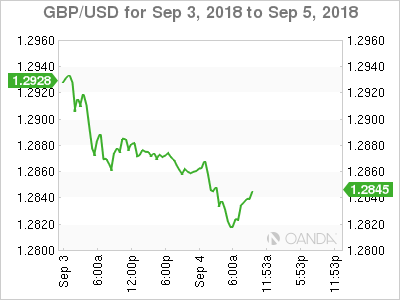 Data this morning shows that the UK’s latest purchasing managers’ index on construction activity fell to 52.9 in August, well below July’s 55.8 and below market expectations for a smaller fall to 54.9. Nevertheless, the index does remain in expansion territory. 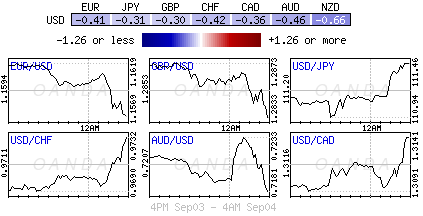