TRY: The Turkish Central Bank regained some of their credibility this morning after delivering a surprise 125bps rate hike, which bolstered the Turkish Lira as central bank look to stabilise the currency and fight against rising inflation. Subsequently, USDTRY crashed through 4.50, reaching a low of 4.45. The rate hike should keep the Turkish Lira stable, heading towards the June 24th snap election, however with President Erdogan a vocal critic over high interest rates, concerns will rise over his intentions on monetary policy after the election.

EUR: Buying for the Euro persists as we head towards the ECB monetary policy decision as investors digest continue to digest the recent comments made by ECB members in which they highlighted that QE exit will be on next week’s agenda. EURUSD losses following a sharp decline in German Industrial Orders were brief, with greater attention placed on the ECB meeting, the pair currently hovering around best levels having broken above 1.18 and now intent on making a run for 1.19.

GBP:A choppy session for the Pound this morning amid a flurry of Brexit related headlines. Rumours had surfaced that Brexit Minister David Davis could resign over an open-ended Irish backstop proposal. This later prompted PM May to provide a temporary commitment to have a backstop that will come to an end by 2021, as such, Brexit concerns continue to keep GBP subdued. 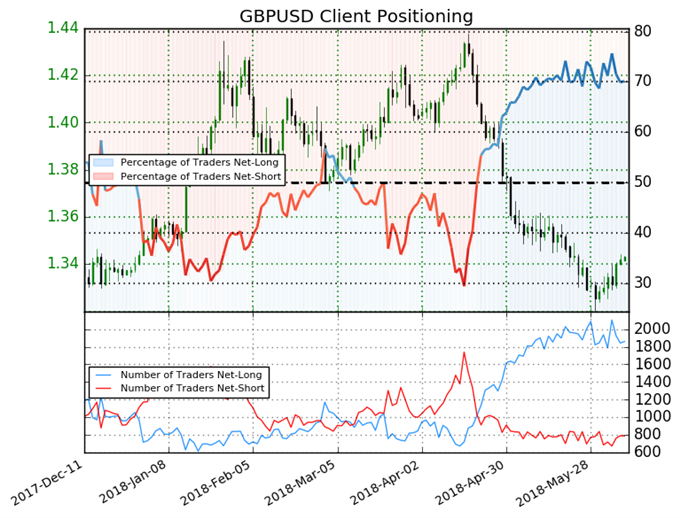 We typically take a contrarian view to crowd sentiment, and the fact traders are net-long suggests GBPUSD prices may continue to fall. Positioning is less net-long than yesterday but more net-long from last week. The combination of current sentiment and recent changes gives us a further mixed GBPUSD trading bias.