U.S. Dollar: 3 Things to Watch For In June FOMC Announcement

The U.S. dollar traded lower against all of the European currencies on Tuesday ahead of the Federal Reserve’s monetary policy announcement. Investors took profits on risk trades as the closed lower for the first time in eight trading days. We’ve had a very strong rally in stocks and high beta currencies over the past few weeks and, with such a major event risk ahead, profit-taking is not unusual. The U.S. dollar will be in focus tomorrow, but there’s very little consistency in its performance today. The greenback traded lower against the Japanese and , but moved higher against other major currencies. That should change tomorrow, however, as the FX market is driven by U.S. dollar flows. Based on the latest price action, investors do not expect much from the Fed. It is not expected to change interest rates or increase Quantitative Easing, but the FOMC should still be a big mover for currencies and equities.

These are the 3 things investors should watch for on Wednesday:

1.    Interest Rate Dot Plot: One of the most important aspects of the June FOMC will be the central bank’s interest rate projections, or dot plot. The last time the dot plot was released was in December. The March meeting was cancelled. At the time, policy-makers expected interest rates to remain unchanged until 2021. Of course, rates were much higher than they are now, so at a bare minimum, all interest rate projection levels will be notched lower. However, the big question is how long do policy-makers expect rates to remain at new lows? There’s no doubt that it will be throughout 2021, but they may not look for rates to increase until the end of 2022. The longer the duration to tightening, the more negative the impact on bond yields and the U.S. dollar.

2.    Economic Projections: It’s been six months since the Fed’s last economic projections were released. On Monday, the National Bureau of Economic Research confirmed that the U.S. economy fell into recession in February. Its projections for 2020 growth will be ugly, but investors are prepared for that. Instead, it will be focused on how long before a meaningful recovery. While the following table below show broad based deterioration in the U.S. economy since the April meeting, more recent measures, particularly the jobs and manufacturing reports, have shown consistent improvements. The U.S. economy is on the road to recovery but will it take nine to 12 months, or two to three years? The faster the recovery, the better it is for the U.S. dollar.

3.    Powell’s Outlook and Guidance: The last piece of the puzzle will be Fed Chairman Jerome Powell’s outlook and forward guidance. There’s no question that policy will remain accommodative for the foreseeable future and the door will remain open to more easing. However, will Powell believe that worse-case scenario has been avoided like his counterparts in other parts of the world? Does he see a stronger pickup in the second half as the labor market recovers? How worried is he about a second wave of the virus. Low interest rates and ample liquidity has been the main catalyst for the economic and stock market recovery – any hint that this could end could send the greenback and stocks plunging lower – a consequence Powell will be keenly aware of.

The Fed’s monetary policy announcement and economic projections will be at 2 p.m. eastern time followed by a press conference from Powell at 2:30 p.m. There will certainly be a big move in the U.S. dollar when the dot plot and economic projections are released, followed by consolidation before Powell’s press conference. We believe their initial outlook will be grim, leading to further weakness for the greenback, but Powell could be less pessimistic, pointing out the signs of recovery, which could moderate the dollar’s losses. Currencies that will benefit the most from U.S. dollar weakness should be the Japanese Yen, , and dollars. Currencies that will be hit the hardest by unexpected optimism should be all high beta currencies, but the euro and sterling in particular. 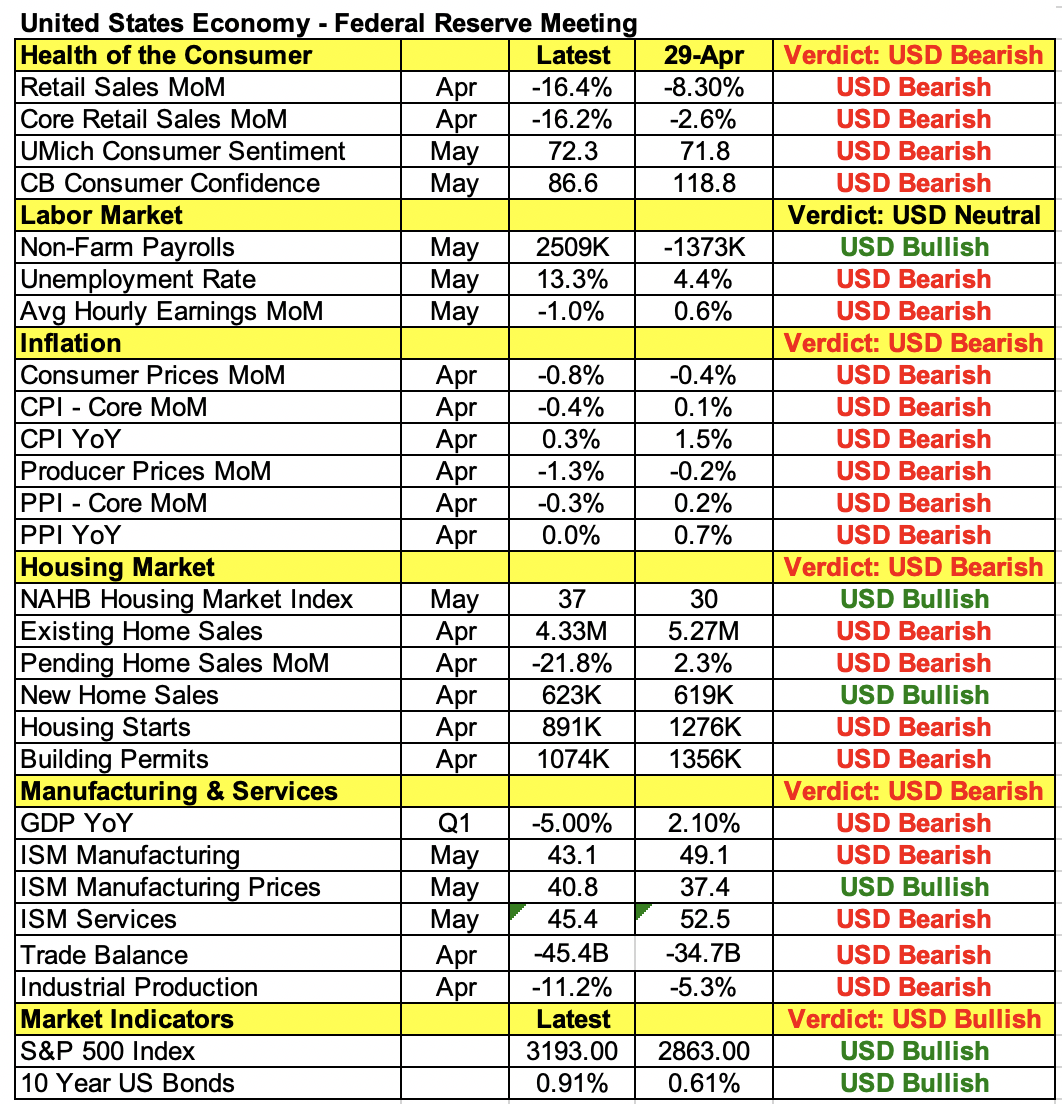