The U.S. dollar was mixed against major pairs on Thursday. The Flash crash that hit the currency markets boosted the JPY and the CAD against the USD. The greenback was higher against all other majors ahead of the release of the U.S. non farm payrolls (NFP) on Friday. The United States is expected to gain close to 180,000 jobs in December, traders will focus on wage data for clues into inflationary pressures released in the same report. The government shutdown in the U.S. limited insight into the state of American jobs and the NFP will bring a definite light on the employment situation. The U.S. Federal Reserve is expected to hike twice in 2019, but a slowdown in the economy could shift the pace of monetary policy tightening. Fed Chair Jerome Powell will be part of a Fed Central Bank chiefs panel in Atlanta and will have the final word this week on monetary policy.

The lost 1.77 percent Thursday and 2.56 percent this week as softer U.S. economic indicators have combined with Apple’s warning that it will miss its quarterly sales target due to lower China sales triggered by trade war uncertainty. The Japanese currency was the de facto safe haven for investors with the JPY hitting 8-month highs ahead of the release of the NFP. U.S. employment has been a steady pillar of the recovery after the crisis, but the emphasis has been on wage recovery which has been slower than expected. The Fed under former chair Janet Yellen and current chair Jerome Powell has not been afraid to hike awaiting inflation to catch up, but as political uncertainty is jeopardizing local and global growth the central bank could be forced to pause its normalization plans. 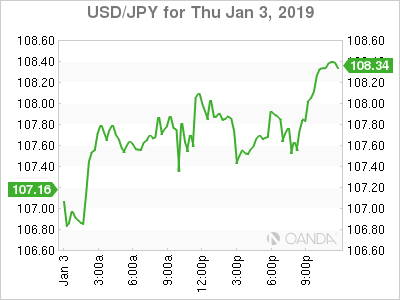 The U.S. dollar advanced against most majors in the past 12 months, but the yen’s safety rating in the last month of the year and the beginning of 2019 have made the currency the preferred destination for investors looking to hedge their USD exposure. The stock market sell off in December trigged a flight to safety. Trade war escalation is not out of the question despite the assurances of China and the U.S. at the G20 and as more U.S. companies start feeling the pain in their bottom line the more urgent it will be for the two nations to restart negotiations.

The report could be a shot in the arm for the U.S. dollar if expectations of 177,000 jobs are met along with a 0.3-percent wage growth component. Powell has been under fire by the Trump administration but has remained steady and transparent with the market lending credibility to the central bank.

The lost 1.22 percent on Thursday. The loonie gained on the dollar after the release of Apple’s announcement of missed revenue projections during the Asian session caused large moves in the forex market. Canadian jobs numbers will be released on Friday alongside the NFP report. There is anticipation for the employment data after the monster 94,100 gain in November. December is a more modest 6.8 forecast, but it would not be unusual to see a correction after such a big gain. 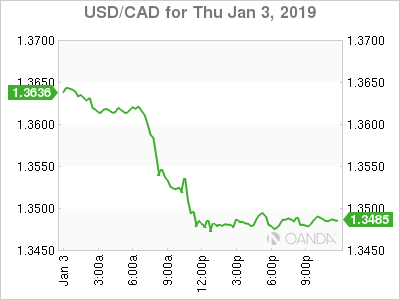 The Canadian dollar touched a two-week high on the back of a softer greenback. The ADP (NASDAQ:) private payrolls in the U.S. beat expectations, but the ISM Manufacturing PMI missed to the downside raising more concerns about an economic slowdown despite the index still coming in above 50, which is considered expansionary. The greenback was boosted by the Fed’s willingness to hike rates, and now the CME Fedwatch tools shows investor expectation has switched from rate hikes, to rate cuts in 2019. The Bank of Canada (BoC) will be up first on Jan. 9.

Govenor Stephen Poloz kept rates unchanged in December, but as inflation and a more optimistic Fed back then the expectation was for a Canadian interest rate hike in the first quarter. The end of 2018 and the rocky start to 2019 could keep Poloz’s finger off the trigger next week with traders keeping an eye on the results of the Canadian employment report.