3.2%! The U.S. economy grew at 3.2%, much higher than 2.3% consensus, and well above the 1.0% to 2.9% range. It is a blockbuster number, but the components told a different story and with the U.S. dollar wrapping a solid week, we should not be surprised seeing a reversal following the release.

Net trade inventories and inventories were responsible for half the gains of and came in softer at 1.3%, well below the Fed’s target of 2.0%. The complete story paints a mixed picture, with many believing the US economy, with the exception of the labor market is still slowing down.

– USD: The dollar is now softer following the GDP report and we could see many investors unwind their bullish bets following the recent runup. 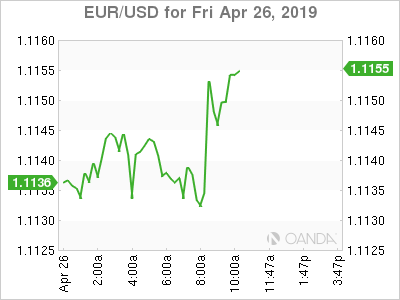 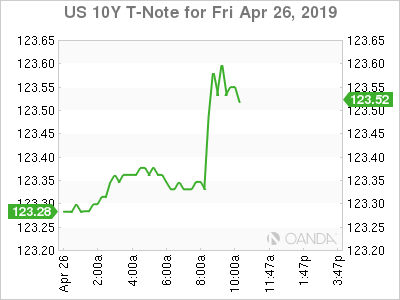 Fed Fund futures had an interesting reaction following the releases this morning. The strong GDP reading along with falling consumption and slightly softer inflation reading have increased rate cut expectations slightly for later in the year. Expectations are at 25% for a rate cut at the June meeting and 50% at the September meeting.

XI
President Jinping Xi delivered personal commitments that China will deliver on several key trade deal issues with the U.S. at his speech at the Belt and Road Forum in Beijing. China will deliver a new foreign investment law that will protect foreign companies from forced technology transfers, remove rules that support unfair competition, no more yuan depreciation and opening up China to further foreign investments.

Trade negotiations pick up again in Beijing next week and it appears we are inching closer to a final deal that is looking more likely to happen in May.

The yuan rallied on the last trading day of the week after central bank set the daily reference rate much stronger than what was expected. 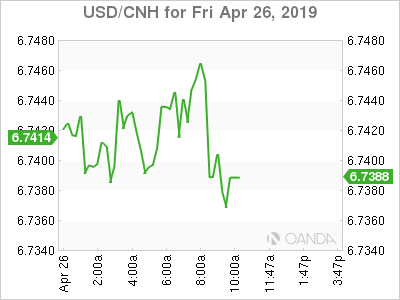 Oil
Crude prices were unable to keep the recent rally going despite a Russian pipeline outage. Details on how long the outage will last are unknown, but it appears crude prices are taking a breather here. Russia has not disclosed any plans on fixing the organic chloride problem, but that could change today when they meet with representatives from Belarus, Poland and Ukraine.

The over 40% rally in oil prices were mainly attributed to the success of the OPEC + production cuts, sanctions on Iranian crude, slower velocity in the increase of U.S. production, and easing of global growth concerns in the U.S. and China. Some of those key drivers however are changing. Saudi Arabia will need to stop over complying with their production cuts to make up for the Iranian shortfall. Russia’s compliance may be waning. U.S. production is expected to continue to accelerate in the warmer months. Europe continues to drag down global growth, but this may be short-lived.

The oil rally may be ready for a stronger pullback after failed to hold the $75 a barrel. The recent surge accelerated once price broke above $70 a barrel, but now it appears recent bullish catalysts have failed to accelerate the move higher. 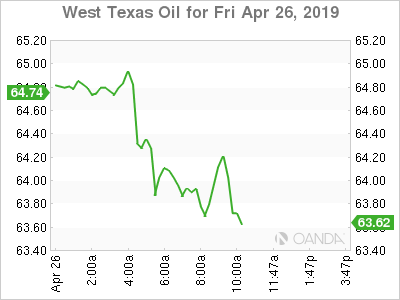 The precious metal initially gave up most of its gains after a much better than expected first quarter GDP reading, but followed the general reversal that hit all the asset classes. Gold is still on target to muster up a 3-day rally here. It will be hard for gold prices to continue to stabilize here if the U.S. economy remains this strong. 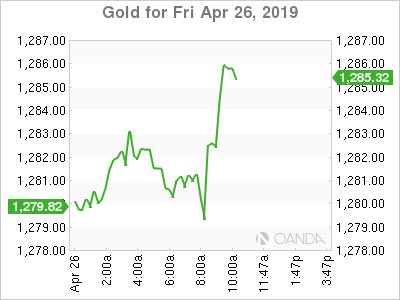