HomenewsMarket OverviewU.S. Rate Cuts Are Coming, So What Happened To The Greenback?

U.S. Rate Cuts Are Coming, So What Happened To The Greenback?

Regardless of how the reacted to the Federal Reserve’s monetary policy announcement, the main takeaway is that lower interests rates are coming. Instead of talking about the possibility of , the conversation has shifted completely to the speed of easing. Back in March, 2 members favored a rate hike in 2019 and 11 favored no change. Now, only 1 member favors a rate hike while 8 see rate cuts in 2019. The worst part for the dollar is that 7 of those 8 members see the need for 2 rounds of easing. St Louis Fed President wanted interest rates to be lowered by 25bp Wednesday.

So we did not even need to hear from Federal Chairman to understand how dovish the central bank has become over the past 3 months because the dot plot alone speaks volumes about how dramatically sentiment inside the Fed changed. Inflation is easing and uncertainty is rising while business investment is slowing. Even though the Fed upgraded its 2019 GDP forecast and lowered its projections, its next move should be a rate cut and not a hike. The Fed also removed the word “patient” from the , which was originally expected to be hawkish, but now it’s seen as a sign that it won’t wait long before easing. Yet Federal Reserve Chairman Powell still put on a brave face and described the labor market as strong and said incoming data is good, especially on the consumer level. However it won’t take much to tip that group over the edge. According to Powell, they “expect to learn a lot more about the risks in the near term” and if data or the risk picture worsens, There’s enough support within the central bank to ease quickly.

In A Nutshell, 6 Things To Know About Wednesday’s Fed Meeting:

The fell across the board after the and dot-plot forecast were released but failed to extend lower on the back of Powell’s comments because the Fed chair downplayed the urgency to ease. He made it clear that they are in wait-and-see mode but at the end of the day, all of the changes to the FOMC statement is negative for the dollar. The Fed may be waiting for more data before lowering interest rates but it won’t take much to push them into action – one or two months of disappointing or numbers will be enough. We believe that the dollar should be headed lower against the , and but losses against , and should be limited by the dovish bias of those central banks.

The action continues with the Bank of England’s Thursday. Unlike the ECB or other major central banks, recent comments from Bank of England officials cannot be described as dovish. Everyone is worried about a no-deal Brexit but a number of policymakers including Deputy Governor and policymaker Saunders feel that rates may have to rise faster than the market expects. This is a view also shared in the past by Governor because the central bank’s base case (and ours as well) is for a smooth Brexit. According to the table below, there hasn’t been any clear direction in the economy since the policy meeting. If the emphasis is on rate hikes, sterling could hit 1.28 versus the and .88 cents versus . However if the bank follows in the Fed’s footsteps and raises the possibility of easing, GBP should fall to fresh year-to-date lows against both currencies. 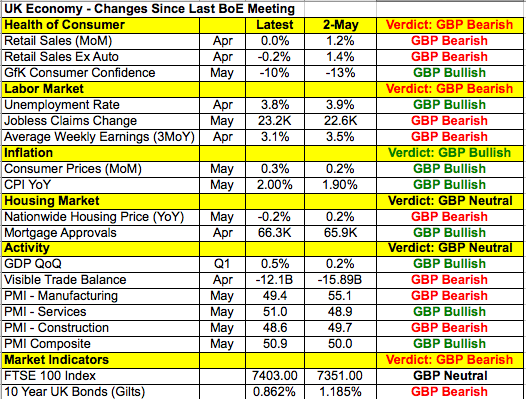