HomenewsAlertsUK Week Ahead: A Packed Calendar with Added Brexit

UK Week Ahead: A Packed Calendar with Added Brexit

We have released our Q1 2019 Trading Forecasts for a wide range of Currencies and Commodities, including GBPUSD along with our latest fundamental and medium-term term technical outlook.

A quiet start to the week with the US observing the annual President’s Day holiday, but this has not stopped either Sterling pushing ahead or the US dollar from drifting lower. Market activity will ramp from Tuesday with the economic data and events calendar full of potentially market-moving releases and statements. A brief, but not comprehensive, summary sees UK jobs and wages data on Tuesday followed by German and Euro-Zone ZEW sentiment, while on Wednesday, the FOMC minutes grab the headlines. On Thursday, the latest German and Euro-Zone PMIs will be watched closely, before the ECB minutes are released, while on Friday a raft of final German and Euro-Zone numbers alongside IFO sentiment and expectation readings. While all this is going on, there are numerous ECB and Fed speakers out on the wires, with Friday afternoon especially busy in the US.

Sterling has started the week in a positive mood, making small gains across the board. A slightly positive Brexit backdrop has given the British Pound a boost, while a weaker US dollar has helped GBPUSD to move back above 1.2900. News mid-morning that seven MPs had quit the Labour Party and will sit in Parliament as part of the Independent Group, did little to move Sterling as it eyes Tuesday’s jobs and wages data. 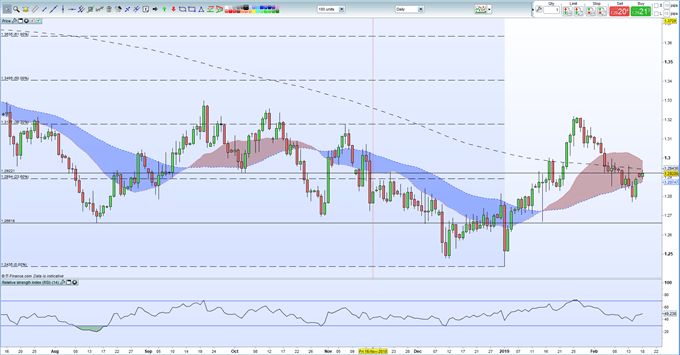 IG Retail Sentimentdata shows clients are 64.9% net-long GBPUSD, a bearish contrarian indicator. However, the combination of current sentiment and recent changes gives us a mixed trading bias for GBPUSD.