AUD/USD pares the weakness following the larger-than-expected slowdown in China’s Consumer Price Index (CPI), and fresh data prints coming out of Australia may fuel the recent series of higher highs & lows in the exchange rate as Retail Sales are projected to increase another 0.3% in November.

The AUD/USD rebound following the currency market flash-crash may get a boost as the underlying strength in private-sector consumption puts pressure on the Reserve Bank of Australia (RBA) to alter the monetary policy outlook, and the central bank may adopt a more upbeat tone at the next meeting on February 5 especially as U.S. President Donald Trump tweets that ‘talks with China are going very well.’

The easing threat of a U.S.-China trade war should keep the Australian dollar afloat as it removes a major downside risk for the Asia/Pacific region, and the central bank may start to prepare households and businesses for a less-accommodative stance as ‘members continued to agree that the next move in the cash rate was more likely to be an increase than a decrease.’

However, it remains to be seen if Governor Philip Lowe & Co. will lift the official cash rate (OCR) off of the record-low in 2019 as ‘there was no strong case for a near-term adjustment in monetary policy,’ and the RBA’s wait-and-see approach may continue to rattle the broader outlook for AUD/USD as the Federal Reserve removes its non-standard measures.

Even though the Federal Open Market Committee (FOMC) appears to be approaching the end of the hiking-cycle, fresh comments from Chairman Jerome Powell suggests the Fed will continue to unload its asset-holdings in 2019 as the balance sheet is expected to return to a ‘more normal level.’ The quantitative tightening (QT) is likely to drag on aussie-dollar rate as long as the RBA remains reluctant to implement higher interest rates, but the monthly opening range raises the risk for a larger correction as the exchange rate initiates a series of higher highs & lows.

Keep in mind, the recent appreciation in AUD/USD has triggered a change in retail interest, with traders still attempting to fade the advance from the monthly-low (0.6745). 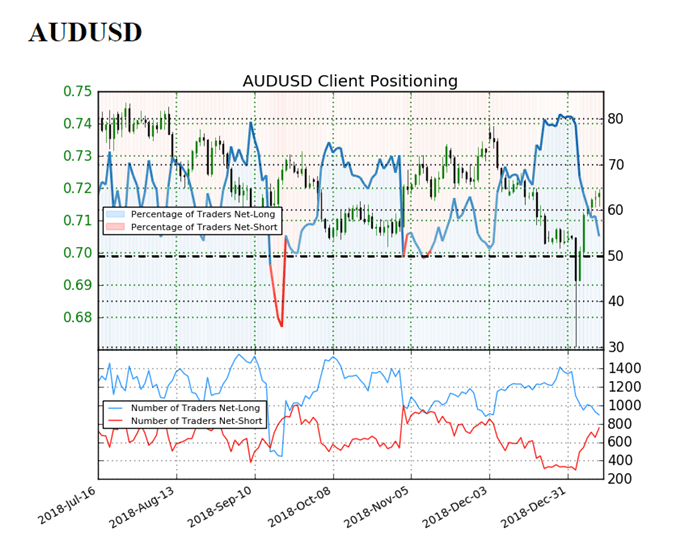 The drop in net-long position appears to be driven by profit-taking behavior as AUD/USD extends the advance from earlier this month, but the ongoing surge in net-short interest suggests a broader shift in retail sentiment is taking shape even as both price and the Relative Strength Index (RSI) break out of the bearish formations carried over from the previous month. Sign up and join DailyFX Currency Analyst David Song LIVE for an opportunity to discuss potential trade setups. 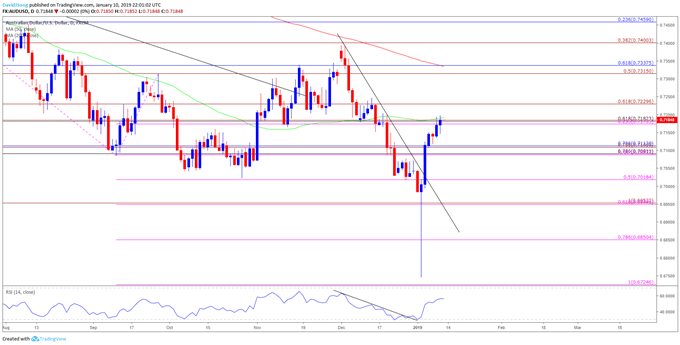