US Dollar Gyrates on Sharpest GDP Contraction in Decades

Widespread forecasts over a steep contraction in economic activity for the US received confirmation Wednesday morning as the advanced estimate for first-quarter GDP crossed the wires at -4.8 percent, missing estimates of -4.0 percent. Economic fallout from the coronavirus takes responsibility for the sharp contraction in economic activity as stay-at-home orders brought the economy to a near standstill. Despite the grim confirmation over the economic contraction, risk-aversion did not materialize. The US Dollar’s reaction was muted after remaining under pressure this week as plans to reopen the economy culled risk aversion.

While the contraction in gross domestic product is unsurprising, it does set the stage for a much sharper drop off in economic activity for the following quarter. Some Analyst expectations for the second quarter are near -30 percent, a decline almost unthinkable just a few months ago. The tremendous drop expected in the second quarter will meet the traditional definition for a recession, marked by two quarters of consecutive economic decline. However, a panel of experts from the National Bureau of Economic Research will officially decide the exact start of this all but guaranteed recession.

US Economic Growth Measured by GDP 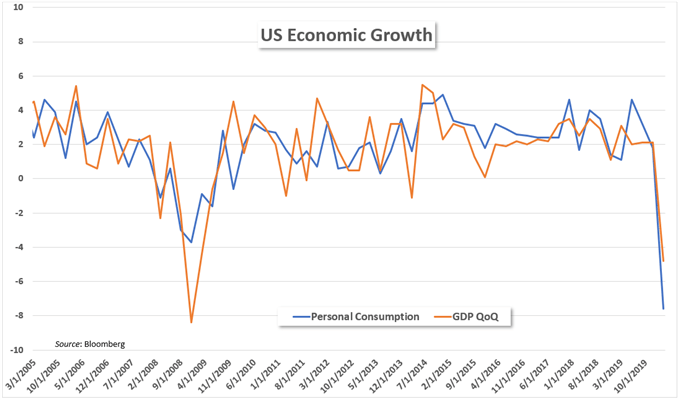 Leading up to Wednesday’s GDP report, the United States witnessed a staggering blow to the labor market, with over 26 million jobs lost Since the latter half of March. Consumer spending consequently imploded, dropping 8.7 percent in March, the worst print on record as stay-at-home orders shuttered a substantial portion of the country’s stores. 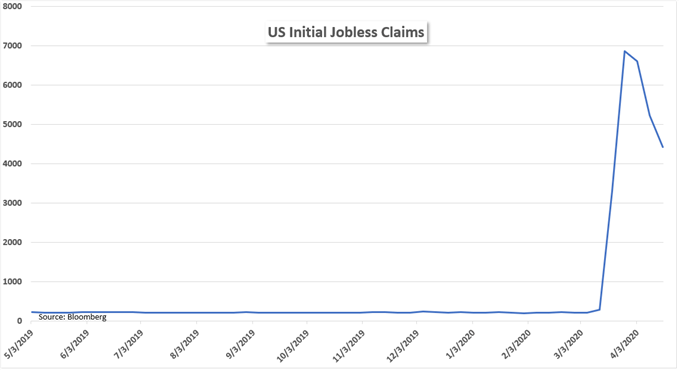 Personal consumption, responsible for almost 70 percent of economic output, contracted by -7.6 percent versus expectations of -3.6 percent. Inventories also dropped. While less important in overall context to growth, the large decline could signal a drop in aggregate demand for the future. Later today the Federal Reserve will announce a rate decision. There are no expectations for another rate cut, but the Fed is expected to comment on the state of the economy and its outlook.