HomenewsNewsUS Dollar May Rise After Jobs Data, Pound Up on Brexit Deal Hopes

US Dollar May Rise After Jobs Data, Pound Up on Brexit Deal Hopes

The anti-risk Japanese Yen edged up while the sentiment-geared Australian and New Zealand Dollars traded broadly lower as markets remained in a dour mood in Asia Pacific trade. As with yesterday’s session, worries about the pace of Fed tightening seemed to be at the forefront. To that end, the US Dollar understandably advanced against almost all of its major counterparts.

A notable exception was the British Pound, which outperformed against the G10 FX spectrum. That followed a Reuters report citing EU officials as saying a Brexit deal is “very close”. Sterling was similarly buoyant yesterday amid optimistic chatter about a new proposal on how to manage the EU/UK border soon to be running through Ireland, which has been a major sticking point for negotiators.

US DOLLAR MAY CONTINUE HIGHER AFTER US JOBS REPORT

From here, all eyes are on September’s US jobs report. Broadly on-trend outcomes on key metrics are expected. Payrolls are seen adding 185k while the jobless rate ticks down to 3.8 percent and the pace of wage inflation moderates a bit to 2.8 percent on-year. Anything short of an improbably dramatic disappointment may open the door for the greenback to continue building higher.

See our US Dollar forecast to learn what will shape price action in the fourth quarter! 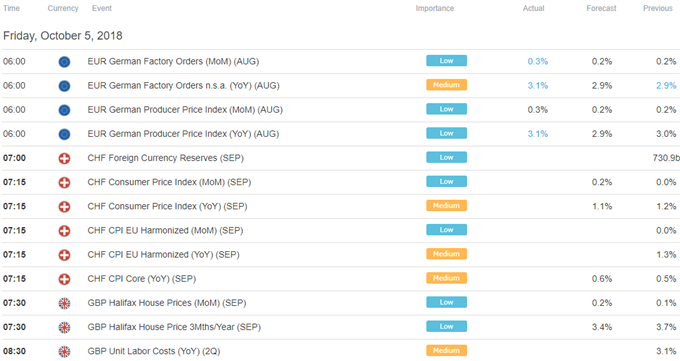