The anti-risk Japanese Yen broadly weakened in otherwise inconclusive Asia Pacific trade across the G10 FX spectrum. The move echoed gains across most regional bourses. The news wires attributed the move to optimism stoked by unexpectedly strong US GDP data and hopes for an imminent in US-China trade negotiations. Reports citing unnamed officials claim a deal may be signed in a matter of weeks.

A final look at February’s Eurozone manufacturing PMI figures is expected to confirm flash estimates showing the first contraction since June 2013. That may underscore worries about a broader slowdown in global growth. Against this backdrop, an expected uptick in regional CPI inflation might emerge as a further liability for sentiment, hinting the ECB might be slow to offer a counter-cyclical response.

This might cool the exuberance seen in APAC hours to some extent, but a committed push will probably depend on follow-on US economic releases. Indeed, evidence of sluggish performance in the single currency area would reconfirm something already known to investors rather than introduce a novel factor with scope for longer-lasting repositioning.

The US docket offers a diverse array of catalysts. The Fed’s favored PCE inflation gauge is expected to put price growth just shy of the policy target at 1.9 percent, the manufacturing ISM survey is due to show a slight slowdown in in the pace of sector activity growth and the final reading for February’s University of Michigan consumer confidence is seen being revised higher.

Priced-in policy bets implied in Fed Funds futures suggest the markets are now operating on the premise that rates will almost certainly remain unchanged this year – forcing the Fed to backtrack on the 50 basis points in tightening still featured in official forecasts – and a cut will be issued in 2020. Data suggesting such a view may be too dovish is likely to be more market-moving than the alternative.

Such a scenario is likely to be supportive for the US Dollar. More broadly, anything that moves Fed policy bets away from the dovish side of the spectrum may rattle shell-shocked investors worried about any move to tighten credit conditions amid mounting signs of a downturn in the global business cycle. Firm results may thus turn out to sour sentiment, curbing Yen losses and weighing on pro-risk commodity currencies.

What are we trading? See the DailyFX team’s top trade ideas for 2019 and find out! 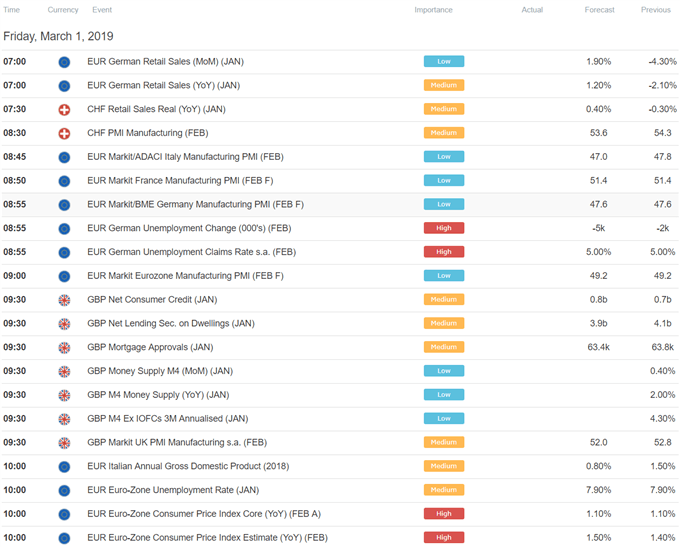