US Dollar Rallies after All-Around Strong December US Jobs Report

– The US Dollar gained ground immediately following the data, with the DXY Index rising from as low as 96.24 to as high as 96.49, at the time this report was written.

See Q1’19 forecasts for the US Dollar, Euro, British Pound and more with the DailyFX Trading Guides

The final jobs report for 2018 has been released, and it’s proven to be one of the better all-around jobs reports of the entire year. The December US Nonfarm Payrolls report showed headline jobs growth of +312K, blowing past expectations of +184K, according to Bloomberg News. The figure closely mirrored the large beat in the corresponding ADP Employment report released earlier this week.

Elsewhere, good news was sprinkled throughout the report. Wage growth remains strong, coming in above expectations at +3.2% (y/y). This reading is tied with October 2018 as the fastest pace of wage growth seen since April 2009.

Here are the data lifting the greenback this morning: 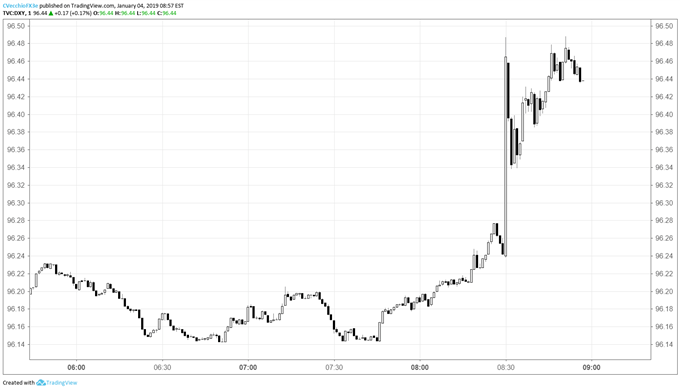 Immediately following the data, the US Dollar traded higher versus the Euro and the Japanese Yen, with the Dollar Index (DXY) rallying from 96.24 to as high as 96.49 in the wake of the report. By the time this report was written, the US Dollar was affirming its gains. EUR/USD, which traded as low as 1.1364 after the release intially, was holding at 1.1367 at the time of writing.