Find out what retail traders’ FX buy and sell decisions say about the coming price trend!

Global stock markets suffered another day as the MSCI Emerging Markets ETF flirted entering a bear market, the index has fallen almost 20 percent from its January peak as trade war fears intensified over the past months. The S&P 500 tumbled after Thursday’s market open, coinciding with a drop in the Emerging Markets ETF. This also followed intense Russian Ruble weakness.

The anti-risk currencies such as the Japanese Yen and Swiss Franc largely outperformed against their major counterparts. US Treasury prices rose, reflecting a flight to safety from investors towards arguably the world’s most liquid assets. Meanwhile, the pro-risk Australian and New Zealand Dollars underperformed versus their FX cousins.

Ahead, the Nikkei 225 could head for its sixth consecutive day of losses as market mood continues deteriorating. This is because ahead of Friday Asia Pacific trade, a report crossed the wires that Donald Trump hinted at targeting a trade fight with Japan next. While this may inspire risk aversion in the near-term, there are reasons to suppose that Japan could escape US punishments as it is a key strategic ally.

For now, the anti-risk Japanese Yen could find itself appreciating amidst trade war fears between the US and Japan. Not to mention that the hearing period for Chinese US tariffs ended, opening the door for Trump to impose what could be an additional $200b in taxes on the world’s second largest economy. This trading dynamic once again leaves AUD and NZD vulnerable.

Amidst market wide risk aversion, USD/JPY tumbled the most in a single day since July 20th (-0.73%). The pair not only descended through a near-term rising support line, but it also fell under the August 2015 descending resistance line. The pair has been struggling to maintain gains above that trend line. With that in mind, we may see USD/JPY fall to 109.77 next which could be immediate support as the August 21st low. 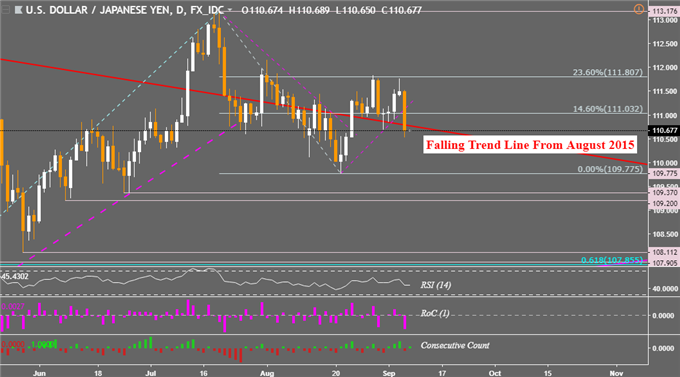 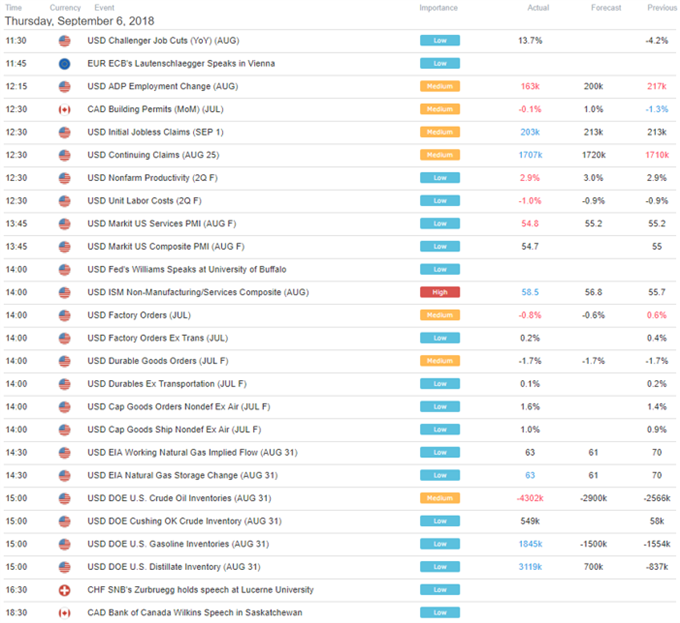