US Trade Balance Surprises in April Even as Trade Wars Progress

The United States’ advanced goods trade balance for April offered up a positive surprise for the US economy, surpassing expectations by a balance of $2.8 billion. The consensus forecast for the figure was a net deficit of -$71 billion, while the actual figure came in for a narrower -$68.2 billion shortfall. The previous month’s report showed a deficit of -$68.6 billion. According to the report, exports of American goods last month totaled $139.6 billion, $0.7 billion less than March; while imports of foreign goods were $207.8 billion, $1.1 billion less than March imports.

Although trade wars have continued to churn in the global financial system, the April trade balance seems little affected by the otherwise troubling implications. With the announcement to continue progress on $50 billion worth of tariffs against China, the US may begin to record changes in the metric in the forthcoming months. Similarly, the exemption period for steel and aluminum tariffs ends on June 1st. In conjunction with metal tariffs, the US has considered auto tariffs, an important export for the EU, Japan, and South Korea. Should they take effect, the metal tariffs should be visible in the June reading, due July.

As we look to markets, the response was generally positive but focus likely remains elsewhere. Although first quarter GDP and GDP price index figures both missed expectations, US indices are up significantly compared to the previous day as fear over the Italian political situation cooled. 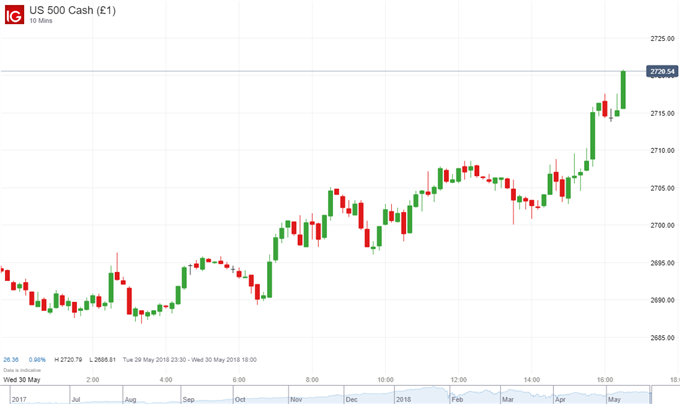