HomenewsCurrency ForecastUSD/CAD: Another Week In The Red For Canadian Dollar

USD/CAD: Another Week In The Red For Canadian Dollar

is unchanged in the Monday session. Currently, USD/CAD is trading at 1.3397, up 0.08% on the day. On the release front, there are no major events on the schedule. Canadian is expected to dip to C$6.20 billion. In the U.S., the is expected to drop to 20.1 points. On Tuesday, Canada releases and the U.S. publishes and .

The Canadian dollar continues to struggle. The currency has declined for four straight weeks, dropping 1.8% in that time. Weaker oil prices and a slowdown in the U.S. are weighing on the Canadian economy and the export sector is being hampered by the ongoing U.S.-China trade war. The Bank of Canada is expected to respond by scaling back rate hikes. The bank has raised rates three times this year, but stayed on the sidelines at the December meeting. With the Federal Reserve expected to raise rates just once or twice in 2019, there will be less pressure on the BoC to raise rates.

As expected, U.S. were down sharply in November. dropped from 0.7% to 0.2%, while retail sales declined to 0.2%, down from 0.8%. Still, retail sales managed to beat the estimate of 0.1%. Lower oil prices have boosted consumer spending, which is expected to look strong in the fourth quarter. Inflation has dipped of late, dropped to 0.0% in November, down from 0.3% a month earlier. This marked the lowest level since May. remained pegged at 0.2 percent. The weak readings can be attributed to falling oil prices, which has led to a sharp decline in gasoline prices. On an annualized basis, inflation gained 2.2 percent in November, down from 2.5 percent in October. 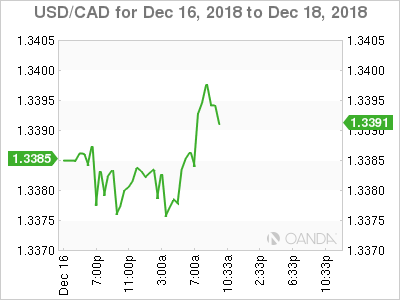